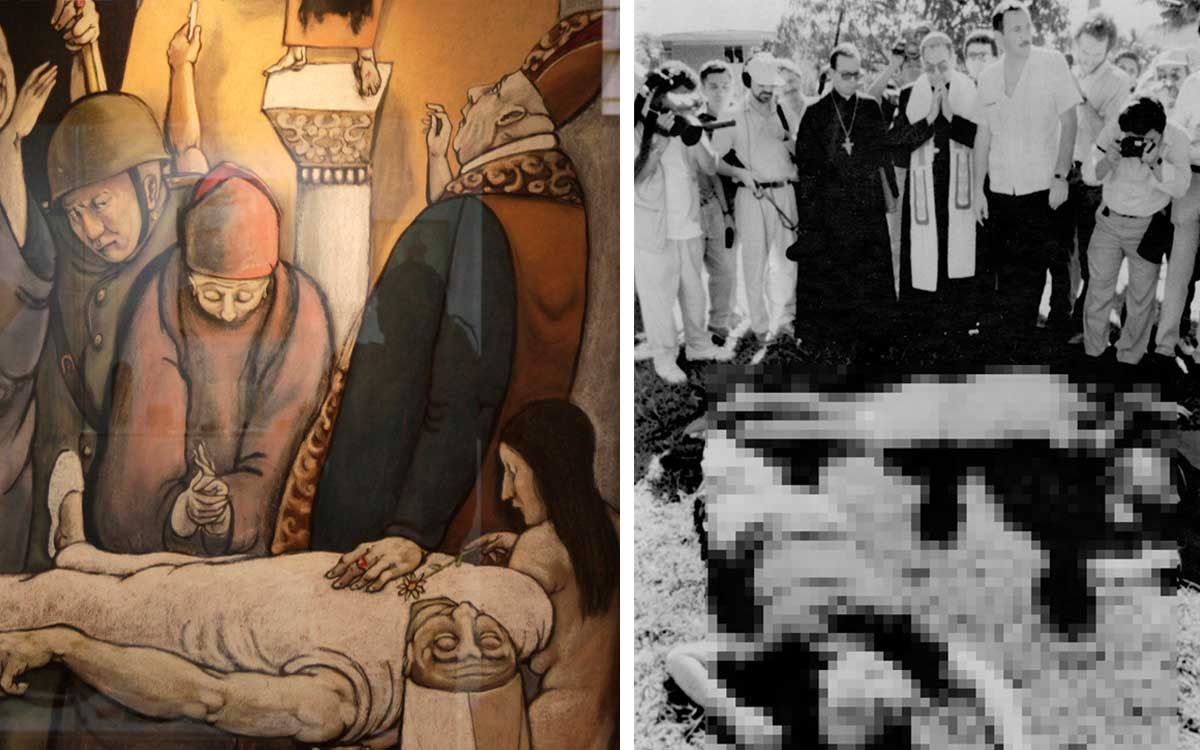 By Rhina Guidos – No one can deny that the act was horrific. Six priests found face down on a lawn with bullet holes through various parts of their bodies. One was in his bathrobe.

“Before the end of darkness on the morning of Nov 16, with unspeakable and barbaric cruelty, armed men burst into the Jesuit residence at the University of Central America in San Salvador and shot six Jesuit priests to death. At the same time, the community’s cook and her daughter were murdered in their bed. According to reliable reports, several of the priests, my brothers, had their brains torn from their heads,” wrote Georgetown University president Father Leo Donovan Nov 19, 1989, three days after the killings, in The Washington Post.

He had known well one of the victims, perhaps the most notable, Jesuit Father Ignacio Ellacuria, who along with Fathers Ignacio Martin Baro, Segundo Montes, Juan Ramon Moreno, Joaquin Lopez y Lopez, and Amando Lopez were beaten, then dragged to their deaths in a garden. The bodies of their Salvadoran housekeeper Elba Ramos and her teenage daughter Celina Ramos were nearby.

But 30 years after their murders, and well before then, what they left behind in their heroic deeds, their writings and speeches has inspired others to continue the slain Jesuits’ work on behalf of the poor.

“When I’ve been at the commemorations, it always strikes me that the celebration is filled with joy, with a sense of resurrection, and with the sense that these men, and these two women continue to be alive, that they are present and they are present in a way to remind us that in every Christian life, we are supposed to try and make a difference in the world,” Mercy Sister Ana Maria Pineda, a theologian born in El Salvador who teaches at California’s Santa Clara University, told Catholic News Service in an Oct. 31 interview.

The murders took place at Central American University in San Salvador, the capital, and the school – popularly known as the UCA (pronounced oo-kah) – becomes a place where people from all over world gather on the date of their martyrdom, said Sister Pineda. They discuss the priests’ writings, their legacy and how they can carry out the mission of these Jesuits, of serving the poor and vulnerable, in their respective parts of the world.

Though they are largely lauded for their academic work and for trying to broker peace through political circles, they also were men of action and close to the people, recalled Congressman Jim McGovern, who came into contact with them in the 1980s as a staffer for then-Congressman Joe Moakley of Massachusetts.

“If somebody disappeared, they would show up at the security forces, then police headquarters, demanding to find out where they were. When there was a massacre, they were there. When people were hungry, they brought them food. They would (celebrate) Masses in some dangerous parts of the country,” he recalled during a Nov. 6 chat with students at Georgetown University.

“The fact that they were being threatened, persecuted, that was OK because so were the poor,” added McGovern, a Democrat who represents Massachusetts’ 2nd Congressional District.

Father Ellacuria had been the most vocal of the group and was likely the main target. He urged for years a peaceful end to a war that had dragged on for more than a decade thanks to U.S. military aid that was only leading to more civilian deaths in El Salvador. They would total more than 70,000 in the end.

Father Ellacuria often took to the radio to urge negotiations, at great risk debated on television with Maj. Roberto D’Aubuisson, who commanded death squads in the country, and often met with U.S. delegations urging a stop to military aid. He also visited the U.S. on several occasions, trying to sway public opinion, and thanked organisations trying to get U.S. lawmakers to understand the damage military aid was causing.

“Some churches and religious groups, such as the Catholic bishops of the United States, have exerted themselves on our behalf,” Father Ellacuria said during a June 1982 commencement speech at Santa Clara University. “They have pressed the present administration not to intensify our conflicts through military reinforcement, but to facilitate a just, negotiated solution.”

He also travelled to the United States to testify on behalf of migrants who were leaving El Salvador because of the violence, recalled McGovern, who would later lead a commission investigating the murders. Though the Jesuits’ deaths helped put an end to U.S. aid, justice for their murders has been elusive through the decades, he told CNS in an interview.

“The intellectual authors of the murders were members of the high command of the Salvadoran armed forces and nothing happened to them. They had a trial and a couple of them were to be convicted, but then there was an amnesty that followed. So, everybody essentially skipped justice,” he said.

But justice is important in the Jesuits’ case, he said.

Their case has gone unpunished, along with the assassinations of St. Oscar Romero, fellow Jesuit Father Rutilio Grande and four American churchwomen, as well as thousands of murdered and disappeared Salvadorans for whom justice has not arrived.

However, that doesn’t mean Catholics and others haven’t found meaning in the priests’ deaths, added McGovern.

“So, 30 years have gone by. What is gratifying to me is that every time I go to the commemorations in El Salvador, the crowds of people get bigger and bigger and bigger, from all over the world,” he said. “People want to be inspired and live their lives in a way that honours the Jesuits.”

In the United States, the Ignatian Solidarity Network focuses one of its main events, the Ignatian Family Teach-in, around the date of the murders and gathers throngs of young Catholics from Jesuit high schools and universities in the nation’s capital to learn about social justice and inequality. One of the main components is having those who attend visit lawmakers and advocate for the poor, said Christopher Kerr, the organisation’s director. They also celebrate a Mass to talk about and remember the priests and their companions.

For Sister Pineda, such acts represent the legacy of the Jesuits and the hope that their mission hasn’t ended and instead expanded.

“You are supposed to try to work on behalf of justice, and to speak the truth. And that this is what these six men represented, and the two women who were there are symbols of the pueblo (the people) that they tried to defend through their intellectual work and through their involvement in the communities,” she said.

For those like McGovern, it means keeping the fight alive for Salvadorans, in their home country and in the U.S., helping those who have left because of violence and an unstable economy, legacies of a war the U.S. funded.

“I keep going back because I feel we owe El Salvador something,” he said. “I think we owe them more than what we have provided them and given them, we kind of walked away. … I want people to know that there are some people that still care.”