Persecution of Christians “a Form of Genocide” 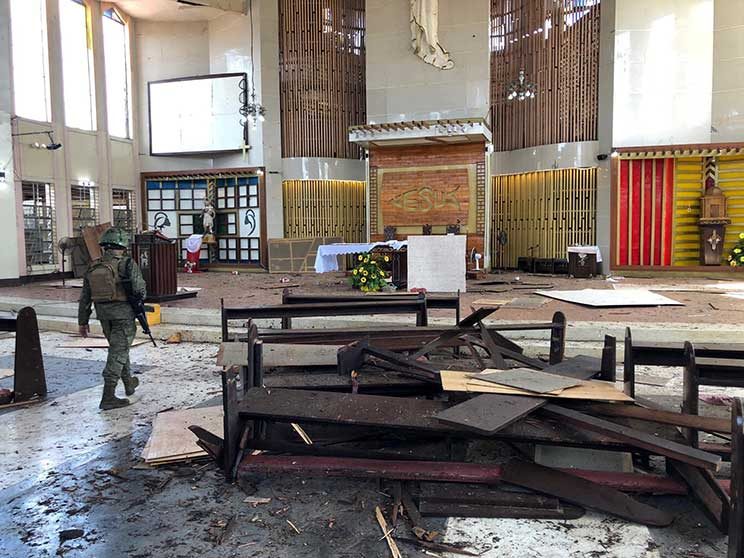 A Philippine army member inspects damage inside the Cathedral of Our Lady of Mount Carmel following a bomb blast in Jolo Jan. 27, 2019. The explosion, just before morning Mass, killed at least 20 people and wounded dozens of others. (CNS photo/Armed Forces of the Philippines via Reuters)

By Bronwen Dachs – Christianity is disappearing from towns and cities in parts of the Middle East, warns a new report from the papal foundation Aid to the Church in Need.

It also said that persecution of Christians “has worsened the most” in South and East Asia.

Urgent action by the international community is needed to prevent more Christians fleeing countries, including Iraq and Syria, said the report, “Persecuted and Forgotten?” It was based on a 2017-2019 study of the persecution of Christians around the world.

“Each person who leaves makes it harder for those left behind,” it said.

While noting that the international community has shown unprecedented concern about the persecution of Christians in the Middle East, the organisation said “governments in the West and the U.N. failed to offer Christians in countries such as Iraq and Syria the emergency help they needed as genocide got underway.”

Pope Francis has denounced the persecution, torture and killing of Christians in the Middle East, calling it a form of genocide that must end.

In Iraq, the number of Christians has dropped from 1.5 million before 2003 to well below 150,000 and in Syria, the Christian population has dropped in size by two-thirds from 2 million in 2011, when its civil war began, said the Aid to the Church in Need report.

While Kurdish and Christian fighters, allied with U.S. troops, are largely responsible and credited for eradicating much of the Islamic State presence in Syria, “the impact of this genocide – continuing migration, security crises, extreme poverty and slow recovery – means that it may now be too late for some Middle East Christian communities to recover,” the organisation said.

“Around the world, Christians are a favoured target for violent militant extremists who operate without boundaries and who attack local Christians as a legitimate alternative to a direct strike on the West,” it said.

In India, Sri Lanka, Myanmar and other countries in South and East Asia, it said, “An increasing unity of purpose between religio-nationalist groups and governments represents a growing – and largely unrecognised – threat to Christians and other minorities.” In Asia, “Christianity is seen as not only alien but as an agent of unwanted Western influence.”

North Korea, where Christians face torture for professing their faith, “is widely considered the most dangerous place to be a Christian,” the report said.

In Sri Lanka, Easter suicide bombings claimed more than 250 lives and injured more than 400 people. The April 21 bombings on a handful of luxury hotels and churches in Colombo and Negombo were carried out by local extremists affiliated with the Islamic State group.

During Mass Jan. 27, two bombs exploded at the Cathedral of Our Lady of Mount Carmel in Jolo, Philippines, killing 20 people and injuring more than 100, the report said.

In India, 477 anti-Christian incidents were reported in 2017, it said.

Cardinal Joseph Coutts of Karachi, Pakistan, said in the report that, while the “government provides armed police protection whenever we request it for church services or gatherings,” militant groups have become difficult to control, “leaving us in a state of constant tension.”

“Somewhere at some time there is going to be another attack — where or when is anybody’s guess,” he said.

In parts of Africa, “Islamist violence is putting huge pressure on Christians,” Aid to the Church in Need said.

Christians in several African countries “are threatened by Islamists seeking to eliminate the church — either by use of force or by dishonest means, including bribing people to convert,” it said.

In Nigeria, Islamist militants continue “a reign of terror against Christians and Muslims alike,” the organisation said, noting that more than 3,700 Christians were reportedly killed in 2018.