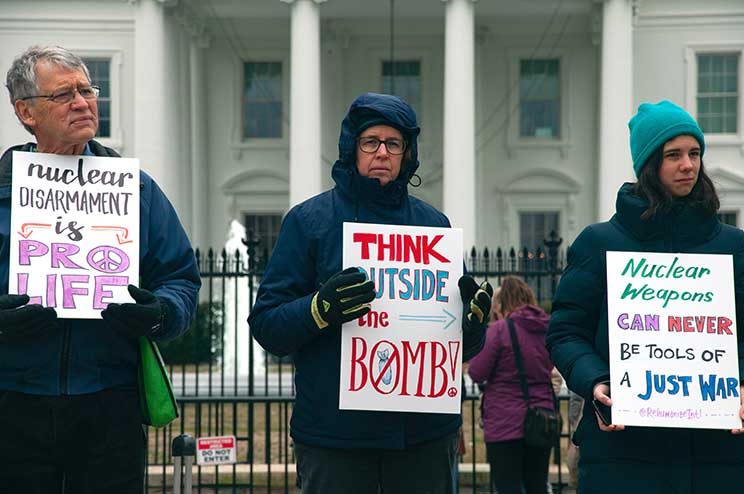 Two years ago, speaking before a Vatican sponsored international symposium titled “Prospects for a World Free of Nuclear Weapons and for Integral Disarmament,” Pope Francis said we cannot fail to be “genuinely concerned by the catastrophic humanitarian and environmental effects of any employment of nuclear devices.

“If we also take into account the risk of an accidental detonation as a result of error of any kind, the threat of their use, as well as their very possession, is to be firmly condemned,” said Francis.

The U.S. has approximately 1,650 strategic nuclear warheads capable of being delivered via land, sea and air, and plans to spend over $1.5 trillion during the next 30 years on modernisation .

During his recent trip to Japan, Pope Francis made it a point to visit Nagasaki, the city where Christianity first took root, and despite centuries of intense persecution grew to become the center of Catholicism in Japan. With tragic irony, this Catholic city was incinerated during World War II by an atomic bomb dropped by U.S. Christian airmen whose military mission was blessed by a Catholic priest – Fr. George Zabelka (see: “The Reluctant Prophet” video.)

In his message given at Nagasaki’s Atomic Bomb Hypocenter Park, Pope Francis said, “One of the deepest longings of the human heart is for security, peace and stability. The possession of nuclear weapons and other weapons of mass destruction is not the answer to this desire; indeed they seem always to thwart it.”

The pope continued that genuine peace cannot be built upon the fear of mutual destruction. That instead, peace can only be realized if it is built on the foundation of a “global ethic of solidarity and cooperation.”

The Holy Father added that “The arms race wastes precious resources. … In a world where millions of children and families live in inhumane conditions, the money that is squandered and the fortunes made through the manufacture, upgrading, maintenance and sale of ever more destructive weapons, are an affront crying out to heaven.”

In Hiroshima – the other World War II Japanese city incinerated by a U.S. nuclear bomb – the Holy Father standing before the A-Bomb Dome spoke with heartfelt sentiments: “An incandescent burst of lighting and fire, so many men and women, so many dreams and hopes, disappeared, leaving behind only shadows and silence. In barely an instant, everything was devoured by a black hole of destruction and death.”

And with prophetic warning Pope Francis declared: “The use of atomic energy for purposes of war is immoral, just as the possessing of nuclear weapons is immoral, as I already said two years ago. We will be judged on this”.

In fact, during his in-flight press conference back to Rome, the pontiff said “The use of nuclear weapons is immoral, which is why it must be added to the Catechism of the Catholic Church. Not only their use, but also possessing them, because an accident or the madness of some government leader, one person’s madness can destroy humanity.”

So, in light of this how can faithful Catholics – not just the bishops, but all of us – go on with business as usual?

We must courageously and persistently challenge the pervasive war mentality – especially the possession of nuclear weapons.

As a first step, please visit “Back from the Brink” and click “Take Action” .