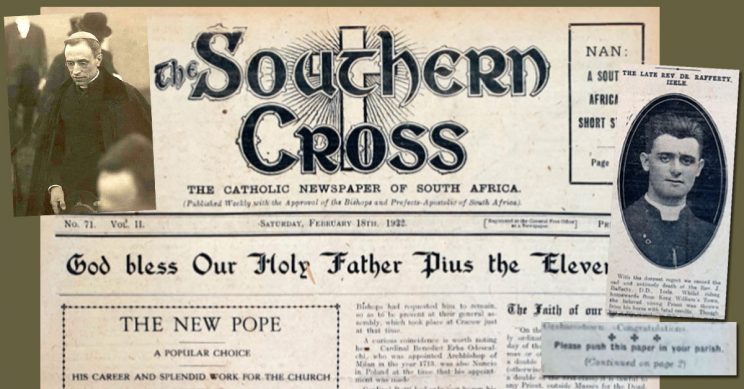 The election of Cardinal Achilles Ratti of Milan to succeed Pope Benedict XV will not be a surprise to Vatican observers. The new pope was born in 1857 in northern Italy and ordained in 1879. He was brought to the Vatican by Pope Pius X in 1911 after Pius X’s death. Pope Benedict appointed Mgr Ratti apostolic delegate to Poland during the time of the country’s independence. He became a cardinal in 1921.

Fr J Rafferty of lzele, near King William’s Town, died after he was thrown off his horse on his way home. The Irish priest had been in South Africa for only a few months, but had made many friends during that time. He is survived by his widowed mother.

A broadcast on wireless radio in New York City produced tangible results when one listener contacted the local parish for instruction in the Catholic faith and a lapsed Catholic sought to be reconciled with his Church.

In his editorial, Mgr John Colgan writes that newly-elected Pope Pius XI “takes possession of the throne of Peter at a time which finds the world still looking for that peace which over-confident statesmen promised as a result of the world conflict which began in 1914”.