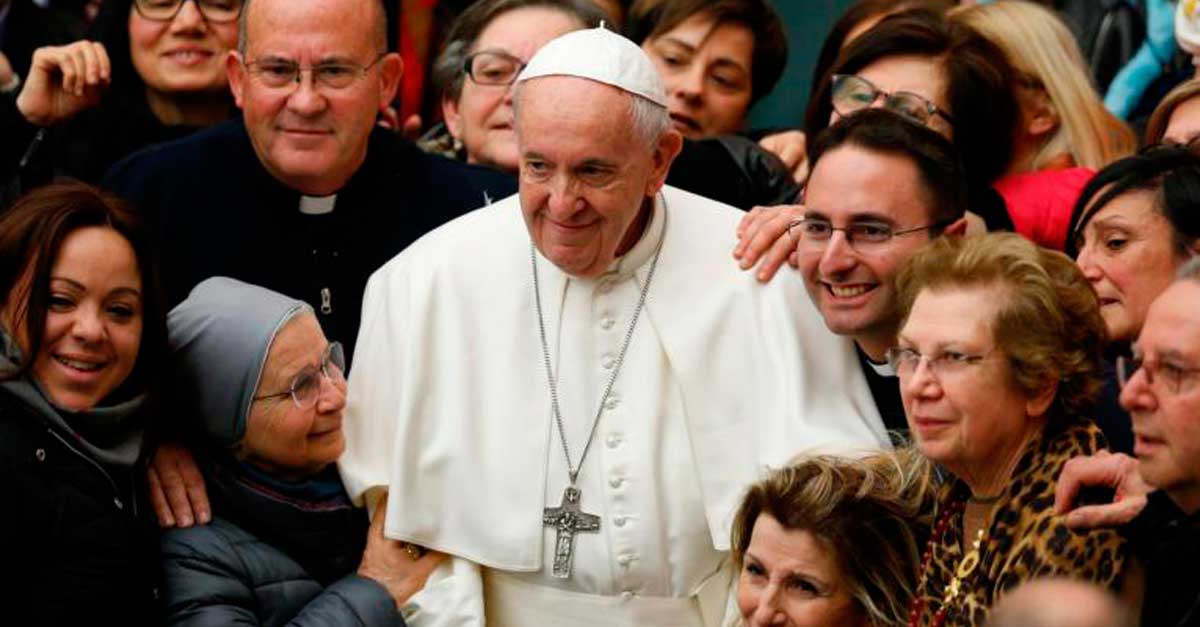 Pope Francis poses with people during his general audience in Paul VI hall at the Vatican. (CNS photo/Paul Haring)

By Junno Arocho Esteves – The beatitudes are a path to joy and true happiness mapped out by Jesus for all of humanity, Pope Francis said.

“It is difficult not to be touched by these words,” the pope said during his weekly general audience in the Paul VI hall. “They contain the ‘identity card’ of a Christian because they outline the face of Jesus himself; his way of life.”

Beginning a new series of talks on the beatitudes, the pope said that there is more to the beatitudes than just a “passing joy or occasional enjoyment.”

“There’s a difference between pleasure and happiness. The former does not ensure the latter and sometimes puts it at risk, while happiness can also live with suffering” which often happens, he said.

Like God who gave Moses and the people of Israel the Ten Commandments on Mount Sinai, Jesus chooses a hillside to “teach a new law: to be poor, to be meek, to be merciful.”

However, the pope said that these “new commandments” are more than just a set of rules because Christ did not set out to “impose anything” but instead chooses to “reveal the way to happiness” by repeating the word “blessed.”

“But what does the word ‘blessed’ mean?” he asked. “The original Greek word ‘makarios’ does not mean someone who has a full belly or is doing well but rather a person who is in a condition of grace, who progresses in the grace of God and who progresses on the path of God.”

Pope Francis invited the faithful to read the beatitudes in their free time so that they “may understand this very beautiful, very secure path of happiness that the Lord gives us.”

“In order to give himself to us, God often chooses unthinkable paths, perhaps those (paths) of our limitations, our tears, our defeats,” the pope said. “It is the Easter joy that our Easter Orthodox brothers and sisters speak about; the one that bears the stigmata but is alive, who has passed through death and has experienced the power of God.”