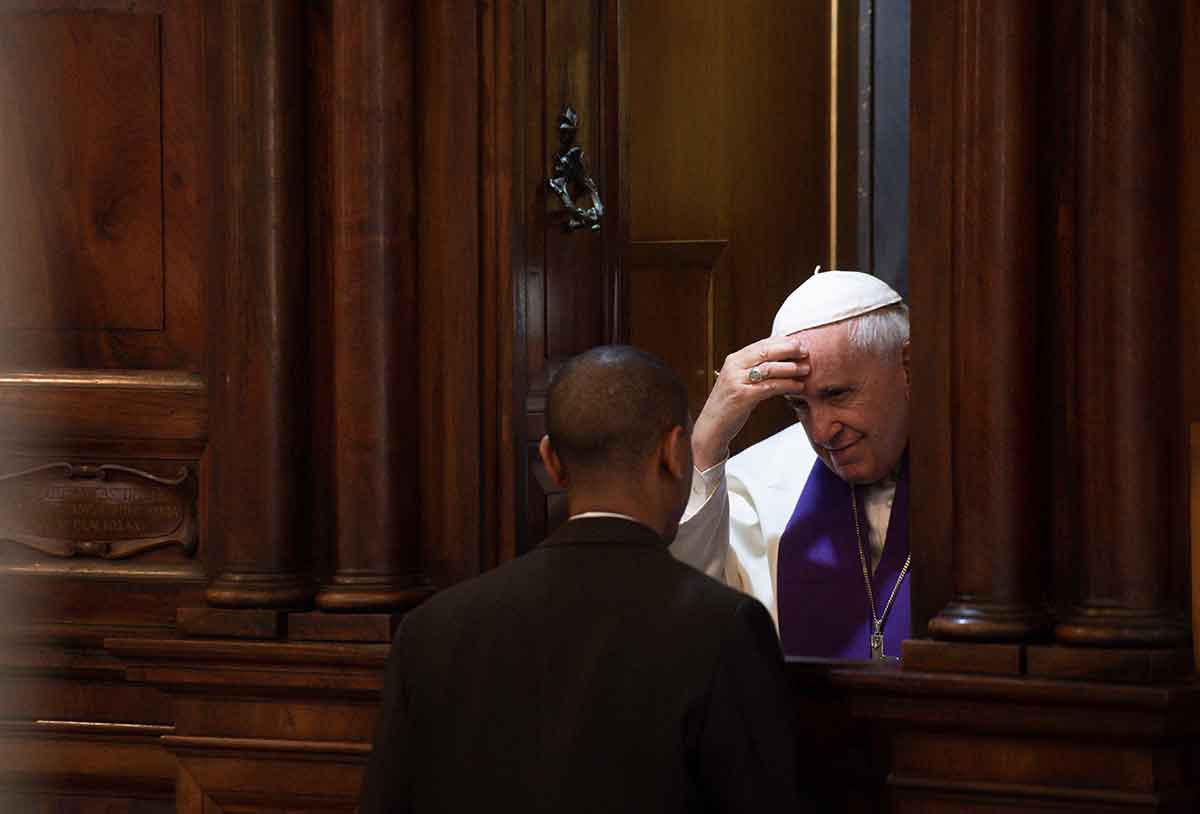 Pope Francis hears the confession of a priest at Rome’s Basilica of St. John Lateran. Reconciling oneself to God leads to healing, the pope said in his annual Lenten message. (CNS photo/Vatican Media)

By Carol Glatz – Lent is a time for deeper dialogue with God through prayer, for renewed gratitude for God’s mercy and for increased compassion for people whose lives are under attack, Pope Francis said.

Also, people must not only show generosity through charitable giving, but they should also work for a real structural change to today’s “economic life,” the pope said in his annual message for Lent, which begins Feb. 26 for Latin-rite Catholics.

Contemplating the great mystery of the death and resurrection of Jesus and putting it at the centre of one’s life “means feeling compassion toward the wounds of the crucified Christ present in the many innocent victims of wars, in attacks on life from that of the unborn to that of the elderly, and various forms of violence,” the pope said in his message.

These wounds are “likewise present in environmental disasters, the unequal distribution of the earth’s goods, human trafficking in all its forms and the unbridled thirst for profit, which is a form of idolatry,” he said.

Not only are Christians called to generously share the richness of the Gospel and gifts from God, “today, too, there is a need to appeal to men and women of goodwill to share, by almsgiving, their goods with those most in need, as a means of personally participating in the building of a better world,” he said.

“Charitable giving makes us more human, whereas hoarding risks making us less human, imprisoned by our own selfishness,” he said.

“We can and must go even further, and consider the structural aspects of our economic life,” he said.

That is why, the pope said, he called for a meeting during Lent with “young economists, entrepreneurs and change-makers with the aim of shaping a more just and inclusive economy.” The meeting was set to take place in Assisi March 26-28.

The theme of the pope’s message, “We implore you on behalf of Christ, be reconciled to God,” was taken from the Second Letter of St. Paul to the Corinthians 5:20, which reflects the invitation to return to God through constant conversion and reconciliation, and experience new life in Christ.

“Life is born of the love of God our father, from his desire to grant us life in abundance,” Pope Francis wrote.

“If we listen instead to the tempting voice of the ‘father of lies,’ we risk sinking into the abyss of absurdity, and experiencing hell here on earth, as all too many tragic events in the personal and collective human experience sadly bear witness,” he said.

“Despite the sometimes tragic presence of evil in our lives and in the life of the church and the world,” he wrote, “this opportunity to change our course expresses God’s unwavering will not to interrupt his dialogue of salvation with us” and his desire that people also engage in fruitful dialogue with each other.

God’s dialogue with humanity “has nothing to do with empty chatter,” which “characterizes worldliness in every age; in our own day, it can also result in improper use of the media,” he said.   At a news conference to present the message, Cardinal Peter Turkson further elaborated on what an improper use of media would look like.

The head of the Dicastery for Promoting Integral Human Development told reporters that different forms of communication can either promote content that is “empty” or “rich” in that it helps build up human character and society or fosters new ideas.

For example, he said, when media outlets cover certain tragic events, like the coronavirus or wars and conflict, they might actually be setting up a kind of “barrier” between the event and the people hearing about it.

“You see something is happening but at the same time you can see that you are not involved,” as if the person is above it all and untouched by others’ circumstances, the cardinal said.

Instead what is needed is a situation where after seeing and hearing about such events, people feel inspired or driven to try to get involved or do something useful to help the situation, he said.

Pope Francis asked in his message that the Lenten season lead to people opening their hearts “to hear God’s call to be reconciled to himself, to fix our gaze on the paschal mystery, and to be converted to an open and sincere dialogue with him” so that everyone become “what Christ asks his disciples to be: the salt of the earth and the light of the world.”

The text of the pope’s message in English is online at: http://w2.vatican.va/content/francesco/en/messages/lent/documents/papa-francesco_20191007_messaggio-quaresima2020.html