If You Can’t Go To Confession, Take Your Sorrow Directly To God 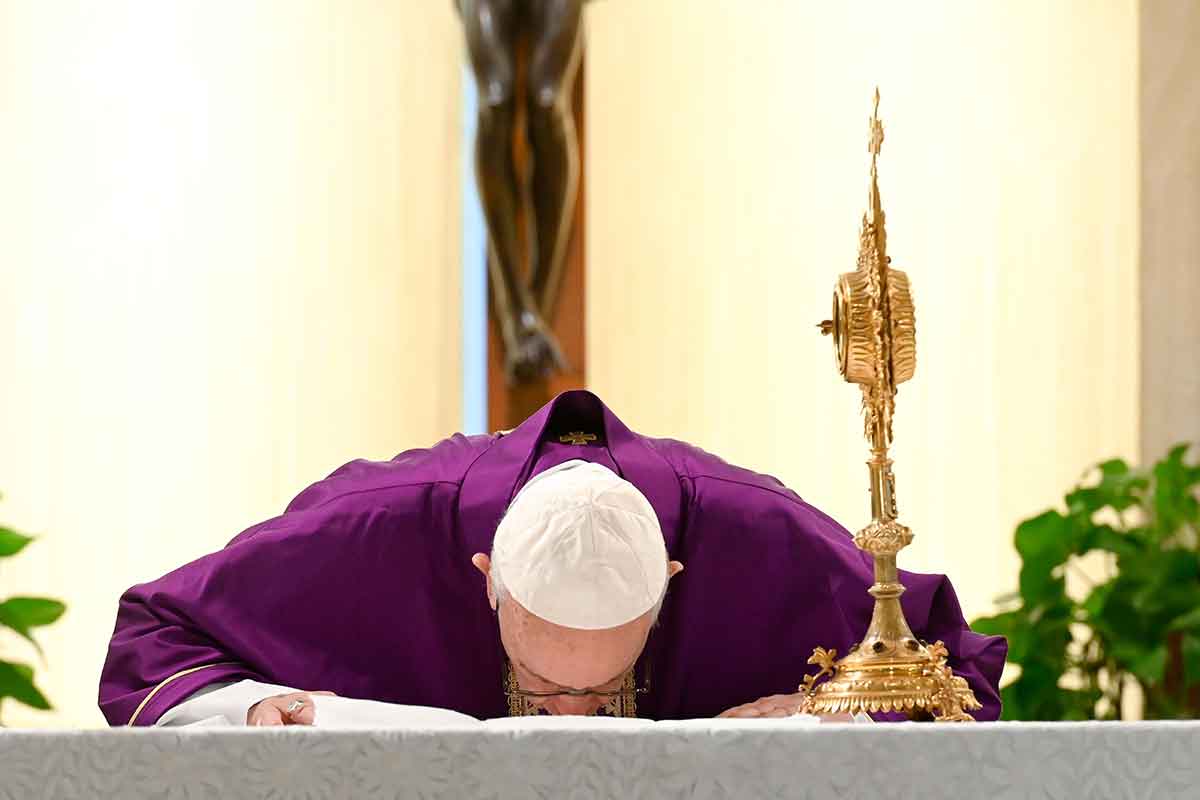 Pope Francis kisses the altar at the end of morning Mass March 20, 2020, in the chapel of his Vatican residence, the Domus Sanctae Marthae. (CNS photo/Vatican Media)

By Cindy Wooden –  People who cannot get to confession because of the coronavirus lockdown or another serious reason can go to God directly, be specific about their sins, request pardon and experience God’s loving forgiveness, Pope Francis said.

“This is the right time, the opportune moment. An act of contrition done well, and our souls will become white like the snow,” the pope said March 20 during his livestreamed morning Mass.

Pope Francis began the Mass by praying again for doctors, especially in northern Italy, where the COVID-19 pandemic still is infecting thousands and leading to the deaths of hundreds of people each day.

The Italian health ministry announced late March 19 that the number of deaths in Italy had reached 3,407, surpassing by 277 the number of people who had died in China because of the virus.

Italy began a nationwide lockdown March 10 in an attempt to slow the spread of the coronavirus. Churches are open for private prayer and priests can hear confessions if they are wearing a mask and gloves and stay more than 3 feet away from the penitent. But people are being encouraged not to leave their homes at all.

The first reading at Mass March 20 was from Hosea, and it encourages people to return to the Lord with all their hearts, recognizing their sins and letting God forgive them, the pope said in his homily.

“Return to your father who is waiting for you,” the pope said. “The God of tenderness will heal us; he will heal us of the many, many wounds of life and the many ugly things we have done. Each of us has our own!”

READ  Pope: People Need 'Prophets' To Warn Them Of Their Sins

Lent is a special time “to let God wash us, purify us, to let God embrace us,” the pope said, and the best place for that is the confessional.

“But many people today would tell me, ‘Father, where can I find a priest, a confessor, because I can’t leave the house? And I want to make peace with the Lord, I want him to embrace me, I want the Father’s embrace.'”

The pope said his response would be, “Do what the Catechism (of the Catholic Church) says. It is very clear: If you cannot find a priest to confess to, speak directly with God, your father, and tell him the truth. Say, ‘Lord, I did this, this, this. Forgive me,’ and ask for pardon with all your heart.”

Make an act of contrition, the pope said, and promise God, “‘I will go to confession afterward, but forgive me now.’ And immediately you will return to a state of grace with God.”

The Catechism of the Catholic Church, N. 1452, says: “When it arises from a love by which God is loved above all else, contrition is called ‘perfect’ — contrition of charity. Such contrition remits venial sins; it also obtains forgiveness of mortal sins if it includes the firm resolution to have recourse to sacramental confession as soon as possible.”

“As the catechism teaches,” Pope Francis said, “you can draw near to God’s forgiveness without having a priest at hand. Think about it. This is the moment.”