Looking At Opportunities During The Coronavirus Crisis 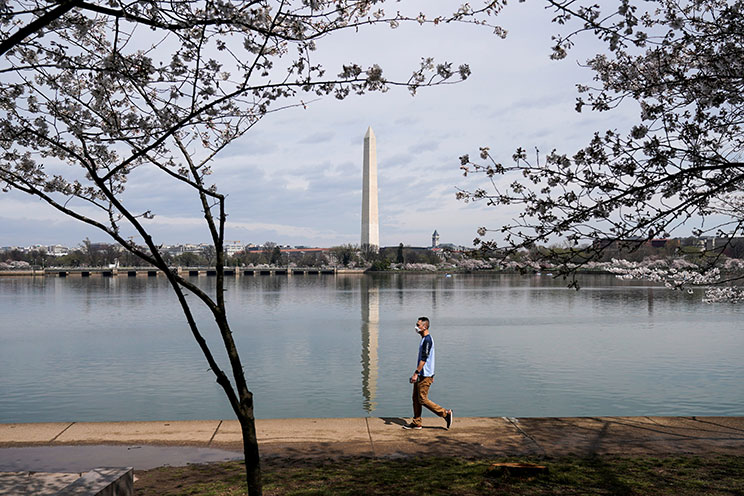 By Rhina Guidos  – This week, I’ve felt like Jimmy Stewart in the movie “Rear Window.”

It’s a movie from the 1950s that I’ve watched with my mother probably more than a dozen times, about a photographer with a broken leg whose inability to move leads him to grab a pair of binoculars and, from his wheelchair, snoop on his neighbors.

Luckily, I have no neighbours to snoop on, but the ceiling-to-floor window in the living room of my apartment faces a main road into and out of Washington. Because I barely spend time there, I’ve never really enjoyed the comings and goings into and out of the city.

But in mid-March, measures taken to prevent further spread of the coronavirus pandemic forced our news organization, like so many around the world, to work at home. From a desk/dinner table moved to face the street, I’ve talked to priests, bishops, a cloistered nun, took calls from giggling friends in the middle of the day, telling me they’ve moved up happy hour, friends needing someone to talk to about the tension of being at home with family, a friend worried about losing a job, and a Malaysian friend worried about going outside because of racist incidents associating Asians with the virus.

My phone, normally silent during the workday, has been lighting up like a Christmas tree. As the physical world became largely confined to my apartment, the outside world came in through it via WhatsApp, FaceTime, Messenger, Skype, text messages and phone calls.

It has been exhausting.

But being a reporter of what some call “the God beat,” or religion news, has its advantages in a time of crisis. That’s because, by and large, you talk to and listen to, as part of your job, experts in crisis management, history, but most importantly, comforting people.

Just as news was breaking about the toll worldwide of COVID-19, I was talking to El Paso’s Bishop Mark J. Seitz of Texas for a story unrelated to the coronavirus.

“I became a priest so I could walk with people in their suffering and help bring them healing,” he told me.

The stock market (and therefore my retirement) was tanking. Friends were texting, asking if there were certain items in my neighborhood store because they couldn’t find them in theirs. I concentrated on the bishop’s voice as I watched the normally heavy foot and car traffic in the street become a trickle — as if someone somewhere else had hit a giant brake on the city.

Bishop Seitz’ voice, calm and steady, helped me stay calm and steady that evening. A few days later, when you visibly could sense the severity, as bars and restaurants in my usually bustling neighborhood closed, I interviewed Sister Maria Elena Romero, a Poor Clare I know well from a convent in Wilmington, Delaware.

READ  Vatican Confirms Pope Does Not Have Covid-19

When I told her what I was calling about, to have her offer tips about what the cloistered life can offer folks who have to stay confined or shelter in place these days, she laughed. She asked me how I was doing and I told her I kind of understood what her day was like, but not really because she’s much busier.

Knowing well that I’m not the type to sit still long, she offered me some personalized advice about what to do and think about should the need to go outside take over. But it was her point of view about what I called confinement that helped me stay indoors for four days — probably the longest period of time I’ve ever stayed inside.

“In the convent, I found freedom, not confinement,” she said, I think politely correcting the way I was seeing the situation.

Sister Maria Elena correctly told me that all of this, the crisis – and life – is not about out surroundings. It’s about what we do with our time, indoors or outdoors for others. How do we serve others and, therefore, God?

I know that what we do each day for Catholic News Service matters. But that’s my job. There’s also a job to do outside of work right now, particularly with those in our midst struggling.

I made a list of friends to call, some who have no family, some I haven’t talked to in a long time, some who have family members who are sick. I pencil out a schedule that includes work, personal calls, but also time to turn off the phone, rest and reflect. I resist the urge and longtime habit of watching the news before bed, and I make an effort to take myself out of the “coronavirus environment” in the evenings, as Sister Maria Elena suggested.

Not every moment is easy. Twice, I’ve ventured outside for walks when I see that the foot traffic is almost nonexistent.

But for the most part, I walk inside my apartment, watch Mass via livestream from my native El Salvador, and look at the world still moving, still alive outside my window as I make a list of what I can do that day, and resist the urge to think about what I can’t do.