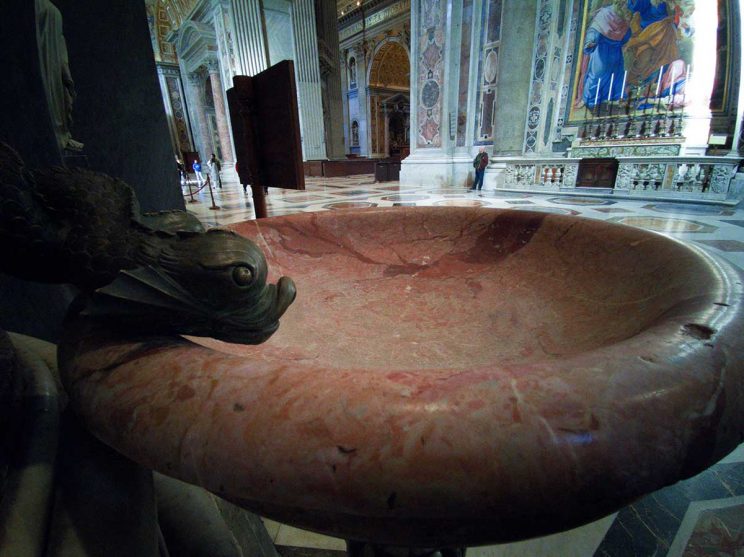 One of several empty holy water fonts is seen in St. Peter’s Basilica at the Vatican. Churches in Rome have adopted measures to prevent the spread of the COVID-19 coronavirus in Italy. (CNS photo/Junno Arocho Esteves)

By Junno Arocho Esteves – The month of March is usually when tourists flock to the Eternal City after the cold winter months and pilgrims come to pray at many holy sites during the Lenten season.

With news of the growing number of people infected with the novel coronavirus, increasing travel restrictions and the Italian government’s order to close all schools, universities and institutes until March 15, places like the Milan cathedral, known as the “Duomo,” and the Sistine Chapel at the Vatican are eerily empty.

As of March 4, more than 2,700 people in Italy have contracted the virus, known as COVID-19, while at least 107 people have died since the outbreak began in northern Italy, the Italian health ministry said.

Nevertheless, the delicate balancing act of preventing others from being contaminated while not increasing panic has proven to be a challenge, especially for the Vatican, which receives thousands of visitors each year to its museums, catacombs and churches.

Matteo Alessandrini, a press officer at the Vatican Museums, acknowledged that cancellations by tour groups have caused a significant drop in visitors.

The Vatican Museums, he added, would not release specific data on the decreasing numbers because “it wouldn’t make sense to compile statistics right now.”

A recent report in the Italian newspaper Il Messaggero stated that the Vatican Museums experienced “an estimated 60% drop in attendance.”

However, Alessandrini expressed bewilderment that percentages were “published by several newspapers” without contacting or confirming those numbers with the Vatican Museums’ press office.

During the first days of the outbreak, the Pontifical Commission for Sacred Archaeology closed all of Italy’s ancient catacombs, citing concerns that the humid conditions and narrow spaces would allow the virus to spread, the Reuters news agency reported Feb. 27.

An official at the pontifical commission told Catholic News Service that the catacombs will remain closed for the time being, and the office will continue to monitor developments related to the spread of the virus.

The unfortunate timing of Pope Francis’ cold, which led to him cancel several meetings as well as his participation in the annual Lenten retreat with members of the Roman Curia, also forced the Vatican to address concerns and hold off the local media from pushing the panic button.

Following a report from Il Messaggero that alleged the pope tested negative for COVID-19, Vatican spokesman Matteo Bruni released a statement March 3 saying the pope was merely suffering from a cold that was “running its course, without symptoms linked to other pathologies.”

Bruni neither confirmed nor denied that the pope was tested for the virus.

While the Vatican health care system has not made public any directives for combatting the virus, the Diocese of Rome announced now-familiar measures to prevent the spread of the coronavirus in parishes: emptying holy water fonts, omitting the sign of peace and requesting that the faithful receive Communion in the hand.

At St. Peter’s Basilica, which follows the vicar for Vatican City and not for the Diocese of Rome, the holy water fonts held up by two 6-feet tall cherubs were emptied, as was the font at the entrance to the sacristy. A statue of St. Peter, venerated by pilgrims by kissing or touching its foot, was cordoned off.

The security line to enter the St. Peter’s Basilica, which can sometimes stretch around the square, saw only a smattering of tourists, some donning protective face masks.

“I’ve never seen anything like this. I never thought it could happen in Italy; it’s weird,” Mountain Butorac, an American tour guide in Rome, told Catholic News Service.

Like many tour guides, Butorac said most groups that were scheduled to visit Rome with him in March cancelled.

“I have friends that are tour guides for the Colosseum and the museums and they’ve had everything canceled. It was going to be a big month,” Butorac told CNS.

With so many groups cancelling their trips, Butorac said it was “really a good time to visit” museums, churches and famed edifices, like the Sistine Chapel, which are now more easily accessible.

“You can go to the Vatican Museums now and there will be like 10 people in the Sistine Chapel. People pay a lot of money for that kind of access,” he said.

“I actually have a few bookings, though, for later this month, so I guess people see that maybe it’s not as bad as some of the media makes it out to be and they’re taking advantage of the cheap fares and the cheap hotels,” Butorac said.

What’s in a Name: Vatican Questions Use of Term ‘Viri Probati’
Share