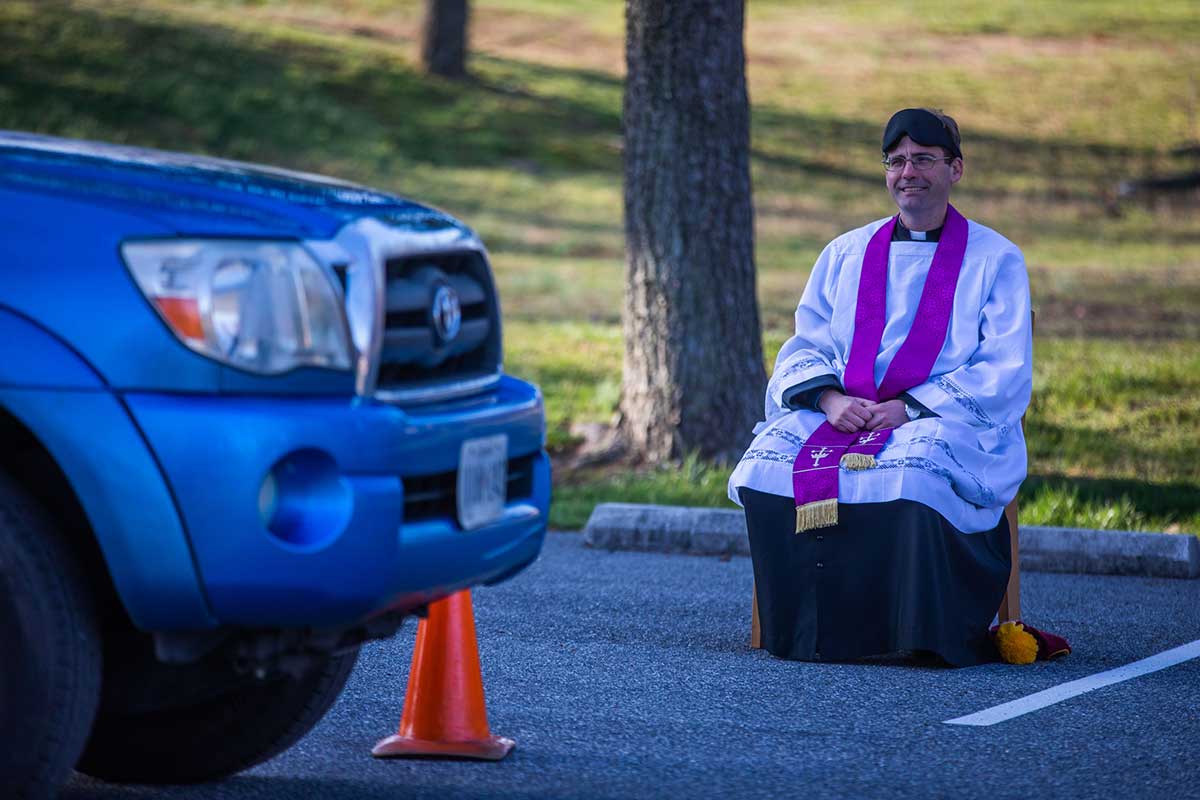 By Josephine von Dohlen – When public Masses in the Archdiocese of Washington were suspended in efforts to prevent the spread of the coronavirus, Father Scott Holmer, pastor at St. Edward the Confessor Parish in Bowie, Maryland, got creative about bringing the sacraments to his local community.

Only 10 minutes before hearing confessions, Father Holmer, wanting to prevent the sharing of common surfaces such as kneelers, chairs and doorknobs among his parishioners, came up with the idea for drive-through confessions.

Grabbing his purple stole, a chair and some orange traffic cones, Father Holmer went outside and set up an outdoor confessional. Seminarian Joe McHenry helped direct cars one by one up to the priest and told Father Holmer when to blindfold himself when the penitent asked for an anonymous confession.

Penitents only have to leave their car when there is more than one person in the car and they can line up behind the car and move into the driver seat when it is their turn for confession.

Reactions, he said, have been positive in the community, and Father Holmer said he plans to continue each day during the regularly scheduled Mass times. In the event of rain, there will be no confessions.

“We’re flying by the seat of our pants here, just trying to figure out how to do this,” he told the Catholic Standard, newspaper of the Archdiocese of Washington.

In a time when there is so much uncertainty about the future, Father Holmer said he encourages people to remain hopeful.

This period away from the Mass, Father Holmer said, will hopefully spark “greater gratitude” in the hearts of many.

“Right now we’re going through Lent, but eventually Pentecost is going to return and we will be together — just wait,” Father Holmer said.

In addition to the drive-through confessions, Father Holmer and McHenry also are going out each day for a eucharistic procession through different sections of Bowie, blessing each house with the sign of the cross and the Monstrance.

Father Holmer said he is limiting the procession to himself and the parish’s seminarian to avoid crowds.

With all the uncertainty that lies ahead, Father Holmer said he encourages families to pray together, read Scripture and pray the rosary together.

He sees this time as a “desert experience,” but he says people have the opportunity to make an active, purposeful choice to devote their time to God.

“God is increasing our longing for the sacraments and the ability to share them in a radically new way,” Father Holmer said. “In their absence, (we are) realizing how much we desire them (the sacraments).”

The Gospels and the Eucharist Changes Lives