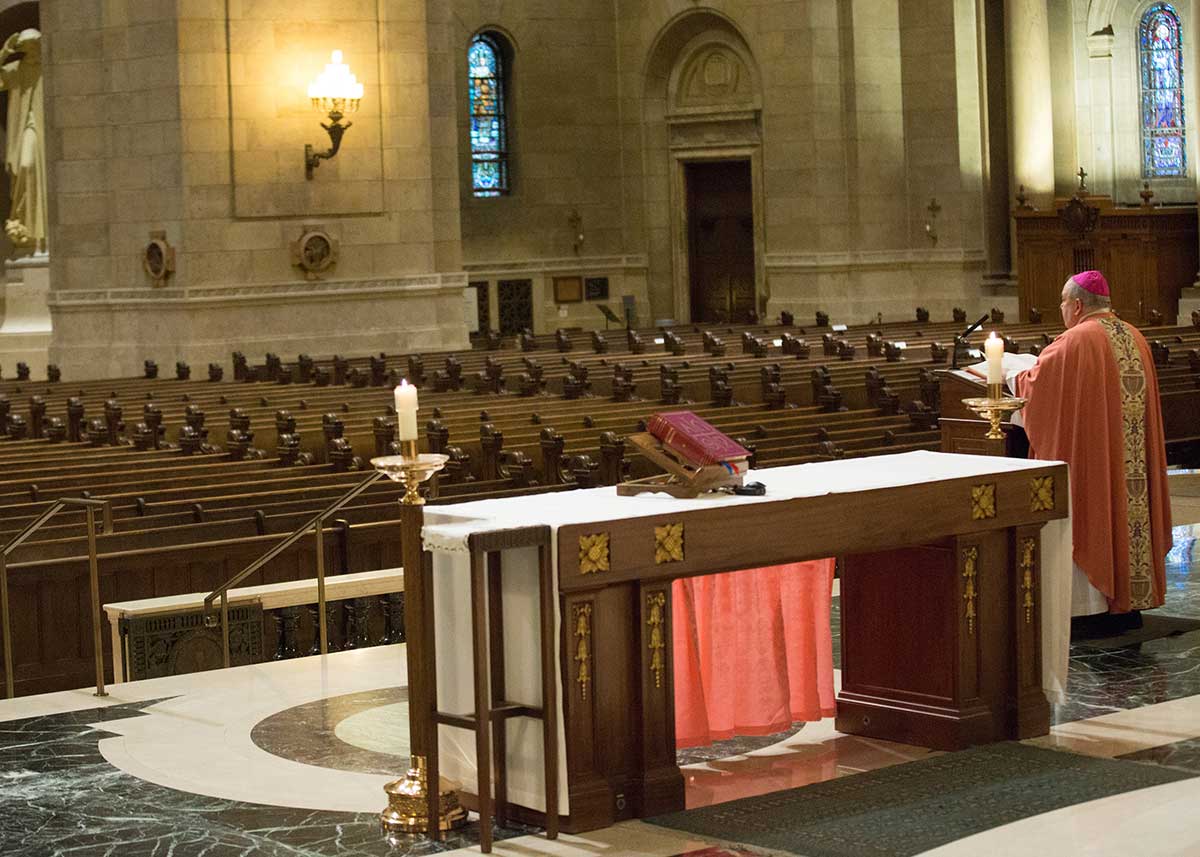 Archbishop Bernard A. Hebda of St. Paul and Minneapolis delivers his homily in an empty Cathedral of St. Paul. The archdiocese taped the Mass for broadcast to the public. (CNS photo/Dave Hrbacek, The Catholic Spirit)

By Mark Pattison – Here is the church, and here is the steeple; Father says Mass, but where are the people?

Imagine if you gave a Mass and nobody came.

That’s an emerging reality for priests as the phenomenon of livestreamed, YouTubed and other online Masses grows amid the pandemic. That’s doesn’t make it any easier, though.

“It’s odd, it’s definitely a new experience,” said Father Scott Mower, a priest of the Diocese of Portland, Maine, since 1997. “It’s nothing I learned in seminary, that’s for sure.”

As for celebrating a St. Patrick’s Day Mass online for the Ancient Order of Hibernians, “it was a little on the weird side to say the least,” said Father James Gardiner, a Franciscan Friar of the Atonement and a priest for 51 years.

“The church was empty. On a Sunday morning when you’re preaching, you think they’re paying rapt attention,” he said.

If a priest’s congregation consists of a camera operator and a lector, it becomes the liturgical equivalent of “if a tree falls in the forest and there’s nobody to hear it, does it make a sound?”

Servite Father Mike Pontarelli, pastor of St. Juliana Parish in Fullerton, California, has been celebrating Mass online for a week. “Well, I’m getting used to it,” he told Catholic News Service. “I preach into TV land. It’s like Lucy in the Vitametavegamin commercial: ‘Hi, everybody in TV land.’

“I taught high school,” he added. Given his students’ low attention levels. “I would teach to nobody, and now I preach to nobody,” he chuckled. Father Pontarelli’s solution: “I imagine the people sitting where they used to be. That’s kind of the truth.”

Even for a priest who is steeped in new communications technology — like Father Andrew Ricci of Christ the King Cathedral in the Diocese of Superior, Wisconsin, who’s been podcasting for five years – this online Mass thing is a whole new ball of wax.

“It’s very odd,” he said. “I’m an extrovert by my own inclination. I get energy from the people” when celebrating Mass.

It’s a different thing entirely, Father Ricci said, “when you’re staring at your iPhone.” The effect on his virtual parishioners, though, is different. “If feels intimate on their side,” he added. “I imagine the faces of the people out there, at least in the readings and the spiritual communion. But I won’t make bones about it. It’s not the way I’d like to say Mass.”

Another Wisconsin priest, Father Doug LeCaptain, pastor of St. Francis of Assisi Parish in Manitowoc, has celebrated Mass on television before. But even in a TV studio, there’s some semblance of an assembly.

This online Mass is a “first time ever in my life, yeah” thing for him, he told CNS. The difference between TV and livestream? “When you have a community gathering, the parishioners there, you get the response,” Father LeCaptain said. “When you don’t have that, you’ve got to keep remember looking at the camera.”

Father Mower, pastor of Ascension of the Lord Parish in Kittery, Maine, said he asked his online congregants to “write in to us and tell us their suggestions to make this a better experience.” Their top suggestion: “Give us a little time so we can do the responses.”

If necessity is the mother of invention, these fathers are doing a fairly good job themselves of making adjustments on the fly to provide pastoral care during the coronavirus pandemic.

Father Gardiner, who assists at the Franciscan Monastery of the Holy Land in Washington, said discussions are already turning there to Holy Week.

“We have two unique services: Stations of the Cross outside, and a burial service that replicates the burial service in Jerusalem” conducted by the Franciscans, who have custody of the Church of the Holy Sepulcher there,” Father Gardiner said.

“It’s packed. Packed!” the priest said of the Washington events. “We’re talking standing room only at these things. … Because of our connection with Jerusalem, I think that would warrant us doing a special program.” It would be, he added, “an experience they would not have in their own homes.”

Father LeCaptain spoke of a two recent events meant to foster faith yet respect the new obligation of social distancing. He heard confessions through the window of the parish’s Life Teen building, and he used the school as the focal point for eucharistic adoration.

“On the second floor of our school, there’s a window there and we put a monstrance there and put a light behind it,” Father LeCaptain said. “I know at one point, there were 18 cars in the parking lot.”

Online, he and two other priests are livestreaming a morning show called “Coffee With the Priests,” tackling a different topic each day. “It’s a little bit of humour, a little bit of seriousness,” Father LeCaptain said. He added online viewers’ attention spans are short, so they try to keep each instalment to 30 minutes.

Father Pontarelli said of his weekday Masses, ” I’m often called ‘Pronto Ponto’ because I get through Mass quickly” since congregants stop for Mass on their way to work. Online though, he said, his homilies are “shorter than usual — I don’t know why.”

“I feel like I know what to do in times of a natural disaster,” said Father Mower, citing the 9/11 terror attacks in 2001 and a 1998 ice storm that crippled parts of Maine. Despite the hardships, “I knew exactly what to do. You pull the people together for a prayer service. The natural inclination is to pull people together,” but now, what you want to do “you’re not supposed to do,” he added.

“It’s certainly different times, that’s for sure. God is always with us, and the love of God goes through all the time,” Father Mower said. “This is a new way that God works through all of us.”