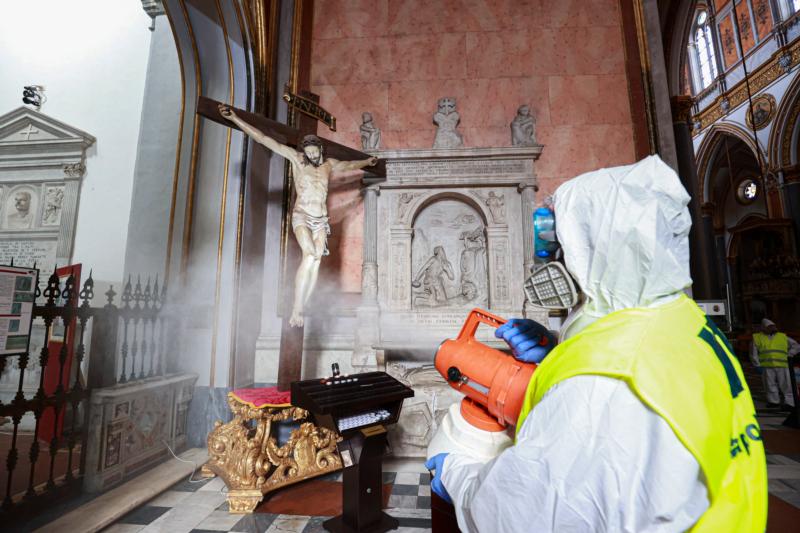 A worker sprays disinfectant to combat the coronavirus in the Basilica of San Domenico Maggiore in Naples, Italy. The suspension of public Masses in Italy is a painful yet necessary measure to protect people’s health, the country’s bishops said in a statement. (CNS photo/Fotogramma/IPA/ABACAPRESS.COMNo via Reuters)

By Junno Arocho Esteves – The suspension of public Masses in Italy is a painful yet necessary measure to protect people’s health, the country’s bishops said.

“This is a very restrictive step, the acceptance of which causes suffering and difficulty for pastors, priests and the faithful,” the Italian bishops’ conference said in a statement March 8.

After the Italian government issued a decree barring the celebration of all “civil and religious ceremonies, including funerals,” the bishops announced the suspension of public Masses until April 3.

“The acceptance of the decree is only mediated by the desire to do one’s part, even in this situation, to contribute to the protection of public health,” the bishops said.

As of March 9, the health and safety precautions published by the Vatican did not include a ban on public celebrations of the Mass, but they did insist that everything possible be done to ensure that people stay one meter (a yard) apart.

Cardinal Angelo De Donatis, papal vicar of the Diocese of Rome, said that while all public Masses are suspended, churches “will remain open, as usual, for personal prayer.”

The Diocese of Rome, he said, “will assume an attitude of full responsibility toward the community in the knowledge that protection from infection requires even drastic measures, especially in interpersonal contact.”

“May this time of Lent help us to live this great test evangelically,” Cardinal De Donatis said.

Bishops throughout the country have sent letters not only to inform their dioceses about the suspensions but to also address concerns by some that such measures are too drastic.

Suspending the public celebration of Mass, “may seem exaggerated in our region, especially after we have committed to organizing participation according to the rules of safe distance and hygienic precautions that should keep us safe from the risks of spreading the virus,” said Archbishop Domenico Sorrentino of Assisi in a March 9 letter to his diocese.

Nevertheless, “the virus is spreading in Italy and around the world, causing suffering and death,” he wrote. “If we don’t contain it, hospital infrastructures will collapse with inevitable repercussions not only for the infected but also for all other sick people.”

Celebrating a televised Mass at the Rome Basilica of the Santi Quattro Coronati March 9, Bishop Stefano Russo, secretary general of the Italian bishops’ conference, said that amid the new restrictions, “the Lord speaks to all of us, especially today.

“He speaks to us in the affliction of the present moment,” Bishop Russo said, according to SIR, the Italian bishops’ news agency. “He invites us to that sense of responsibility that comes from entrusting ourselves to his mercy; he encourages us to find trust, harmony, sharing and unity of purpose.”