The Church in Times of Pandemic 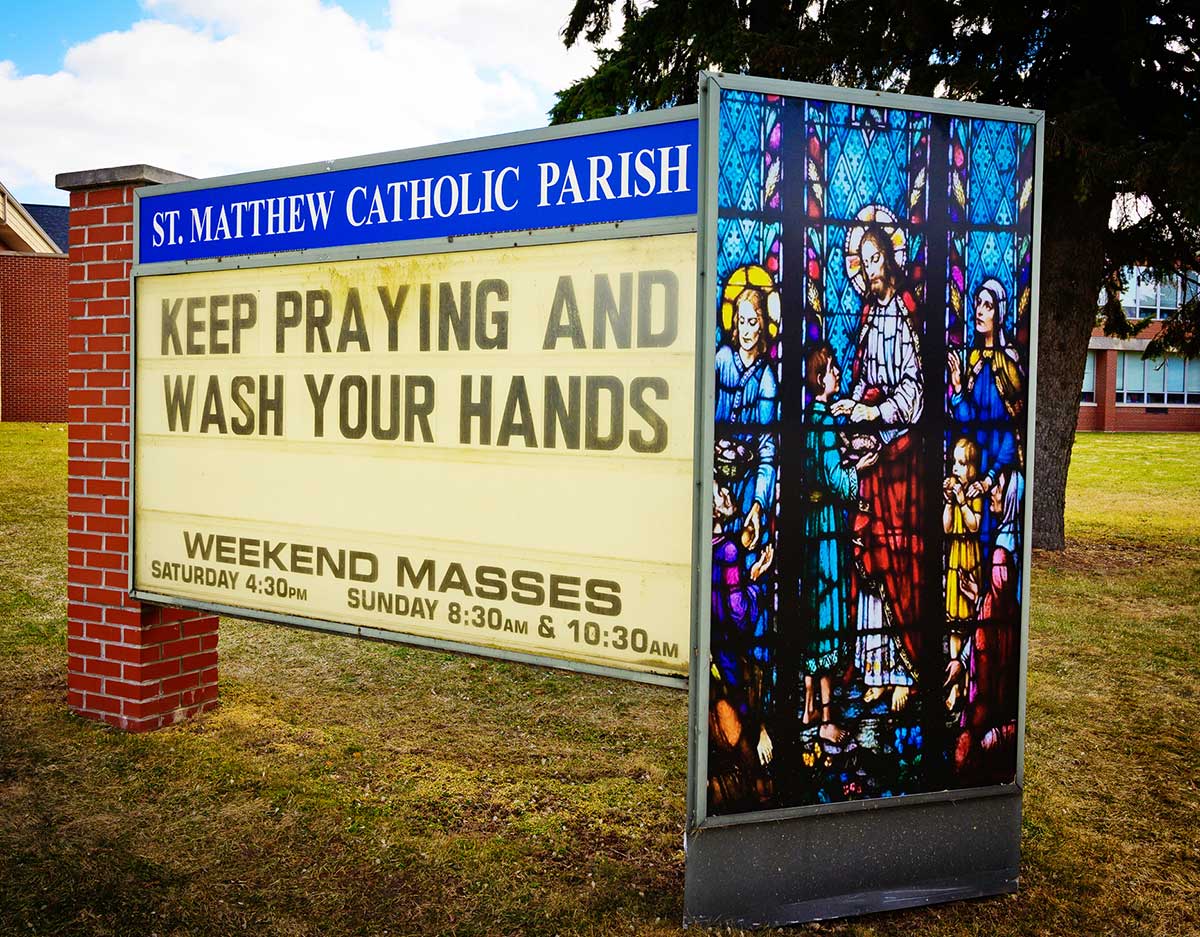 A sign outside a church reminds people how to take care during the coronavirus pandemic. (Photo: Sam Lucero, The Compass)

There is a saying that goes: “You must never allow a good crisis to go to waste.”

Moments of crisis should be moments of reexamination and reevaluation. You probably have the best opportunity of reviewing our health system while the private sector is also paying maximum attention.

If we can come out of this Covid-19 virus pandemic with a clear and well-funded programme for our health system, then we would not have allowed the crisis to go to waste.

The most difficult things to deal with during the time of pandemic are the conspiracy theories and the quacks who feed on the heightened emotional state of crisis, thereby worsening the panic within the population.

The genius of conspiracy theories is that they must contain enough of a grain of truth to lure in the unsuspecting.

Historians and scientists believe when in the 14th century the Black Death swept across Europe, Asia, and North Africa, killing up to 50% of the population in some cities, it never made it across the Sahara Desert. But it was, in fact, carried by fleas infesting rodents on the ships that came to the Cape in the 18th century.

The Bubonic Plague was at its peak around 1665 and had almost disappeared in Europe by 1720 when it broke out again with renewed viciousness in Marseilles.

Another outbreak of the Bubonic Plague reached the shores of Cape Town in 1901.

African people and their residential areas were cited by the government as being responsible for the spread of the disease. It is the reason why the black dockworkers at the city’s foreshore were moved away from the city to Ndabeni, and eventually the peripheries of the present day Langa township.

The disease then spread across the city, resulting in the establishment of segregated residential areas, with Africans being forced to move further to the periphery of the city.

By mid-1901, the disease had spread to other towns, such as Port Elizabeth. As a consequence, black people there were forced to reside in designated areas such as New Brighton.

One of the first detailed accounts of a cholera epidemic comes from Gaspar Correa, the Portuguese historian and author of Legendary India, who described an outbreak in the spring of 1543 of a disease in the Ganges delta.

Pandemic outbreaks come and go. Sometimes they kill a lot of people before they are curbed by the discovery of a vaccine or they just burn themselves out.

What doesn’t seem to disappear is their tendency of causing unnecessary panic among people with unfounded theories and whacky cures.

Daniel Defoe, who reported on the 17th-century pandemic in his book A Journal of the Plague Year, writes about “signs posted by quacks and physicians for prophylactics and cures; or the signs of God’s wrath or God’s will to be…”

It is disappointing to see this in our age still, especially on social media, newspapers, graffiti or even talk within fly-by-night religious congregations (and the occasional Catholic bishop!).

The presidential restriction of public gatherings has affected all congregations, including the Catholic Mass. The experience from other eras of pandemics is that churches and streets become deserted anyway during the height of outbreaks.

Defoe speaks of “the haunting eeriness of streets that thronged only a few weeks before…Windows stood shattering with the wind in empty houses, for want of people to shut them…”

The Church, as the world’s oldest institution, has experience in dealing with pandemics, and it always rises stronger from them, because it is during times of crisis that the human spirit also soars.

For instance, the obsession of the Catholic faithful for relics of saints once killed a lot of Christians with diseases. St Augustine, before he became the bishop of Hippo argued against the sect of Donatists he accused of “worshipping dust from Holy lands”.

But having seen how the relics drew attention and grew the Latin Church when he became a bishop, he built a shrine for St Stephen, within earshot of the main church, now claiming: “There’s a wonderfully sweet picture there…where you see Stephen being stoned, where you see Saul watching over the garments of the ones doing the stoning.”

Being St Augustine, the irony of the moment was not lost on him as he proclaimed: “A little dust has brought together such a crowd…The ash lies hidden, the benefits from it are well known. Think, dear ones, what things God holds for us in the land of the living, who has given us such great things from the dust of the dead…”

He then blessed how the dust of the dead feeds the flesh of the living.

By the way, St Augustine’s own body turned up, so we are assured, in Pavia, where it can still be seen in the same church as the body of Boethius. But today we care more for his teachings than his relics—that’s progress.

The Church adapts and bears more fruit when, like a seed, she falls on the ground.

This too shall pass and will germinate new understanding for our humanity.