Catholic Church Responded To Plagues With Penance and Prayers 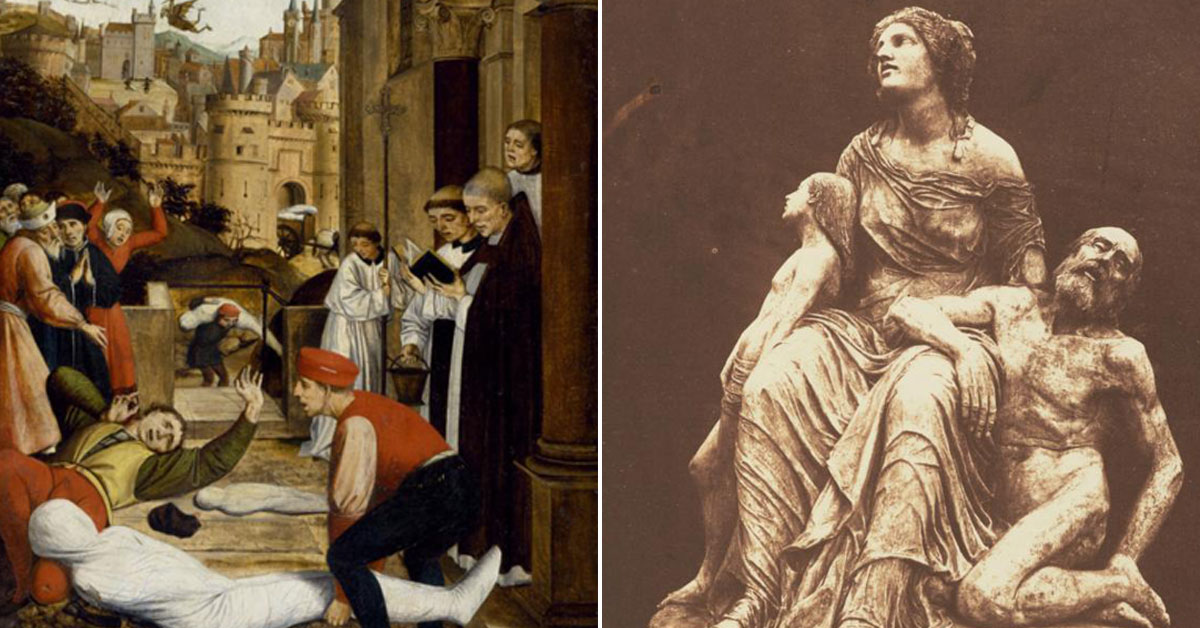 (Left) French artist Josse Lieferinxe depicts an intercession by St. Sebastian during an outbreak of the plague. (CNS photo/courtesy The Walters Art Museum). (Right) This vintage photograph is of a statue representing an allegory of the city of Paris imploring heaven to take away the plague during the 1846-1860 cholera pandemic. The woman in the centre represents the city, with an elderly man and a youth on either side of her suffering from the disease. (CNS photo/courtesy The J. Paul Getty Museum)

By Carol Zimmermann – Although the coronavirus pandemic brings to mind plagues from centuries ago, both with quarantines, fast-spreading diseases and deaths, there is one big difference on the spiritual side: Today’s pandemic is not, save but a lone voice or two, described as God’s punishment on humanity.

As Pope Francis said in his address and prayer to end the pandemic in St. Peter’s Square: The worldwide coronavirus pandemic is not God’s judgment on humanity, but God’s call on people to judge what is most important to them and resolve to act accordingly from now on.

In prayer, he said: “It is not the time of your judgment, but of our judgment: a time to choose what matters and what passes away, a time to separate what is necessary from what is not. It is a time to get our lives back on track with regard to you, Lord, and to others.”

That was not the message the faithful were hearing in the 14th century when the plague known as Black Death swept through most of Europe and parts of the rest of the world only to be followed by waves of recurring plagues.

“There is a negative side of the church’s response to the plagues,” said Franco Mormando, associate professor of Italian studies at Boston College. He said the consistent message over the centuries was that the “ultimate reason for the plague was God’s wrath punishing humanity,” which he added: “is not so palatable to us today.”

This widespread view had the effect of discouraging research on root causes of these diseases, he said. It also prompted a continuous view of sinfulness, penitence and not being right with God.

Nicole Archambeau, an assistant professor of history at Colorado State University in Fort Collins, Colorado, and author of an upcoming book, “Souls Under Siege: Surviving Plague, War, and Confession in the 14th Century,” has focused on the witness testimony given during the canonisation inquiry of Blessed Delphine of Glandeve in 1363, which gives insight into the world at the time.

She said the remarks demonstrate an overall concern about the sacrament of penance. “Over half of the witnesses expressed anxiety about the state of their souls and a desire to be consoled and assured about their souls.”

Archambeau, in an email to Catholic News Service, said these witnesses also spoke about the sacrament of penance as “being ineffective at consolation and assurance,” which echoes what was taught at the time, she said, noting that confessors’ manuals said “living with perpetual worry about the state of one’s soul was normal and even spiritually healthy.”

This introspective look at one’s sinfulness amid the plague’s potential expression of God’s fury also led some believers to flagellation — a more intense form of penitence caused by whipping one’s flesh — which was condemned by the church.

Joelle Rollo-Koster, professor of medieval history at the University of Rhode Island in Kingston, said the basic principle at the time was “God is mad at you and to punish you he sends a disease,” and the traditional response was a need to atone for sins which during the Black Death was done by prayers, processions through the streets and more suffering.

She pointed out that during the plague there were many liturgical processions, usually around the perimeter of a city, asking for God’s protection and demonstrating sorrow for sins.

But amid this overarching sense of penitence, the church also conveyed the sense of gaining merit in the afterlife for their faith in the midst of suffering, Mormando said. The church also reminded people about the “duty of solidarity and service to people in need.” He said the church’s message on this also was directed to the government, stressing that it had the responsibility to “take care of the poor, the weak and the orphaned.”

Once the plagues ended, the historian said, “society shook itself off and continued, more or less as before” without learning moral or economic lessons.

And now, in the midst of this present pandemic, he, like others, is staying at home while teaching courses online. Taking the long view, he said: “Looking back is one way to look at how we are today; hopefully we will forge a better path forward.”

Times Of Trauma: The Old Testament Is A Go-To Guide For Coping

Is Devil Using New Virus To Cause Us To Doubt?
Share