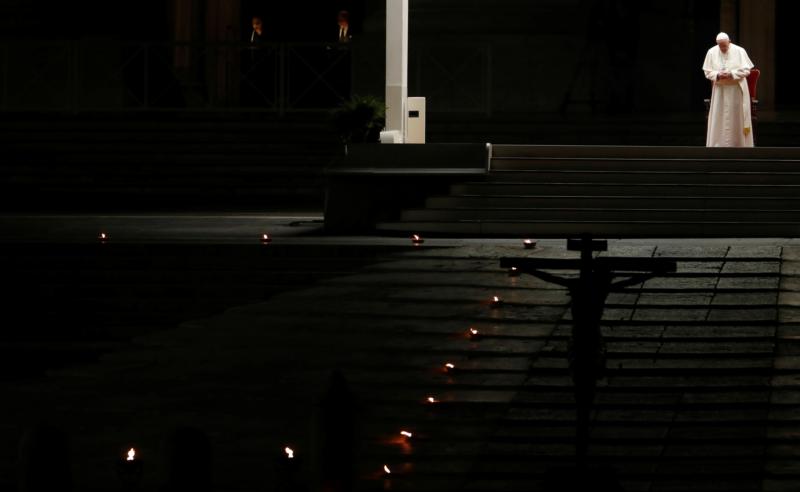 Pope Francis leads the Via Crucis procession in St. Peter’s Square at the Vatican April 10, 2020. The Good Friday service was held with no public participation because of the COVID-19 pandemic. (CNS photo/Yara Nardi, Reuters)

By Junno Arocho Esteves – For the first time in his papacy, Pope Francis led the Way of the Cross from St. Peter’s Square rather than Rome’s Colosseum, where it has been held annually for more than five decades.

Two rows of torches lit the pathway from the stage set in front of St. Peter’s leading down the square; they surrounded the famed ancient Egyptian obelisk that once stood in the Circus of Nero and is believed to be a “witness” to the martyrdom of St. Peter.

The sounds of the Vatican choir chanting sombre hymns broke through the eerie silence and echoed throughout the empty square.

Vatican City and Italy have nationwide restrictions on public gatherings to prevent the spread of the coronavirus. It is the first time since 1964 that the annual service commemorating Christ’s passion and death did not take place in the ancient Colosseum, which for centuries has served as a symbol of the persecution of early Christians.

While the site of the traditional Way of the Cross changed, the meditations remained centred on those who share in Christ’s pain and suffering on the cross. Each year, the pope asks a different person to write the commentary and prayers for the service.

This year, the meditations for the late-night event were written by members of the Catholic community of the Due Palazzi prison in Padua.

The meditations on the traditional 14 stations were written not only by prisoners, but also by people directly affected by crime, including prisoners’ families, victims and even a priest falsely accused of a crime.

In a letter published in the Italian newspaper Il Mattino di Padova March 10, the pope said he chose the prison community so that the meditations would reflect on the lives of those involved in the prison system, including “the victim, the prisoner, the prison officer, the volunteer, the family of those detained, probation officers, the church, and the innocent person who, at times, is unjustly accused.” 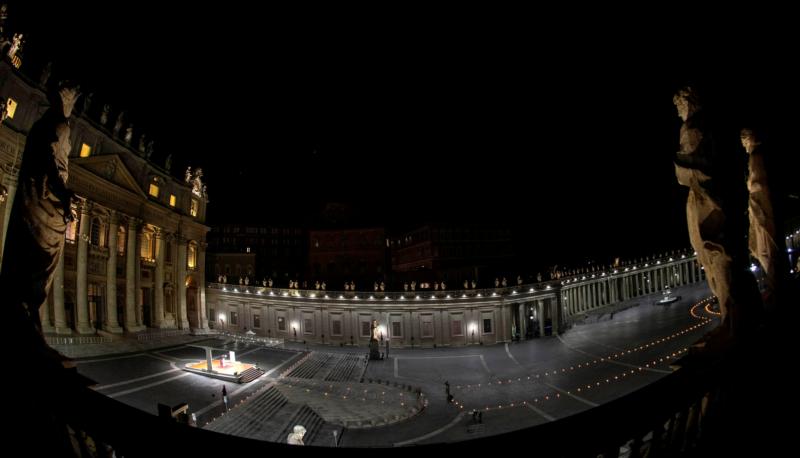 Pope Francis leads the Via Crucis procession in St. Peter’s Square at the Vatican April 10, 2020. The Good Friday service was held with no public participation because of the COVID-19 pandemic. (CNS photo/Claudio Peri, pool via Reuters) re leaving.

In a message to the prisoners released by the Vatican April 10, Pope Francis thanked the prisoners for sharing their stories through their meditations.

God, he said, “speaks to us within a story, he invites us to listen attentively and mercifully.”

“I want to thank you also because you have scattered your names not in the sea of anonymity but of the many people linked to prison life,” the pope said. “Thus, in the Way of the Cross, you will lend your story to all those in the world who share the same situation.”

The Vatican also released a transcript of a brief phone interview to a program aired on RAI, the Italian television station, before the Via Crucis.

When asked about what would be in his heart during the Way of the Cross, the pope said that he was “close to the people of God, those suffering most, especially the victims of this pandemic, to the pain of the world but looking upward, looking with hope, because hope doesn’t disappoint.”

Hope “doesn’t take away the pain,” he added, “but it doesn’t disappoint.”

Pope: Protests Must Be Nonviolent; Governments Must Respect Rights
Share