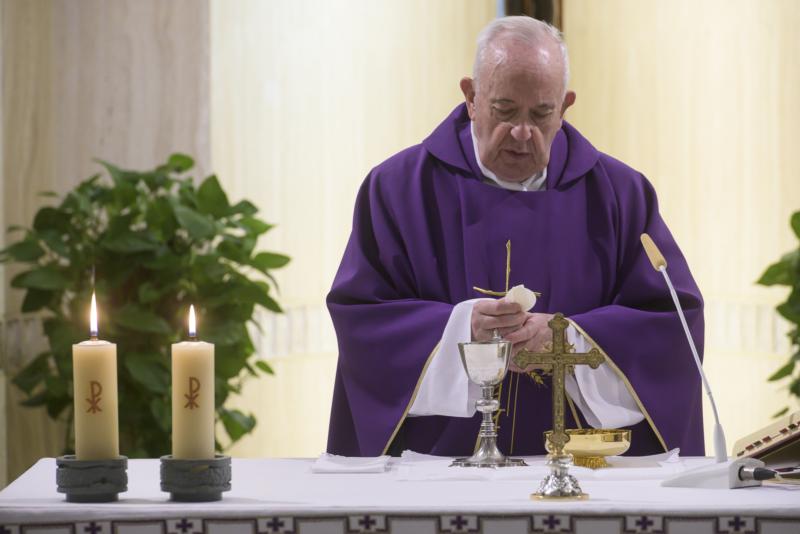 Pope Francis celebrates Mass in the chapel of his Vatican residence, the Domus Sanctae Marthae, April 8, 2020. The pope asked that people pray for a change of heart of people profiteering during the pandemic and taking advantage of people in need. (CNS photo/Vatican Media)

By Carol Glatz – Pope Francis put the spotlight on people profiteering during the pandemic and taking advantage of people in need.

Some people are making a business off of people in need, “profiting from the needs of others,” such as “mafiosi, loan sharks and many others,” he said during the live broadcast of his morning Mass.

He asked, at the start of Mass, that people pray for these profiteers so “that the Lord may touch their hearts and convert them.”

In his homily, the pope reflected on Judas Iscariot’s betrayal of Jesus, as told in the day’s Gospel reading from St. Matthew.

Judas went to the chief priests, asking, “What are you willing to give me if I hand him over to you?” And for 30 pieces of silver, Judas eventually found an opportunity to hand him over by identifying Jesus to those seeking to arrest him.

“Whoever loves money too much betrays in order to have more, always. It’s a rule, a known fact,” he said.

People may pretend to be able to serve both God and money, he said. They are socially “impeccable,” but they exploit people behind the scenes or under the table.

Judas may be gone, he said, but he left behind a lot of disciples – disciples of the devil.

Despite Judas not being a good disciple of Jesus, Jesus still loved him and called him a friend, never a “traitor” even though he knew he would betray him, the pope said.

Seeing Jesus condemned, Judas regretted what he had done, and he became troubled, “tormented by greed and tormented by his love for Jesus.”

“Tormented in this haze, he goes to the priests, begging forgiveness, asking for salvation,” but they tell him, “What is that to us? Look to it yourself.”

This is the way the devil speaks; “he leaves us in despair,” all alone, Pope Francis said.

It was the devil who led Judas to do what he did, and how did it end? the pope asked.

“The devil is a bad paymaster, he is not trustworthy. He promises you everything, he shows you everything, and in the end, he leaves you on your own in despair to hang yourself,” the pope said.

Today there are many institutions that act like Judas by exploiting people, either through human trafficking and the selling of human beings or by not paying people a fair wage or recognising their responsibility toward workers, he said.

Even putting one’s parents away in a retirement home and never visiting them again is like selling off a person by paying others to care for them so one can stay far away in peace, he said.

Everyone has “a tiny Judas” somewhere inside them, the pope said, and that Judas will emerge when it is time to choose between being loyal and doing the right thing or pursuing one’s own self-interest.

“Each one of us is capable of betrayal, to sell, to choose one’s own interests,” he said. “Each one of us has the opportunity to let ourselves be attracted to the love of money or material goods, or future well-being.”

Pope Francis asked people to reflect and ask where that “tiny Judas” is hiding inside of themselves, too.

Pope: Protests Must Be Nonviolent; Governments Must Respect Rights