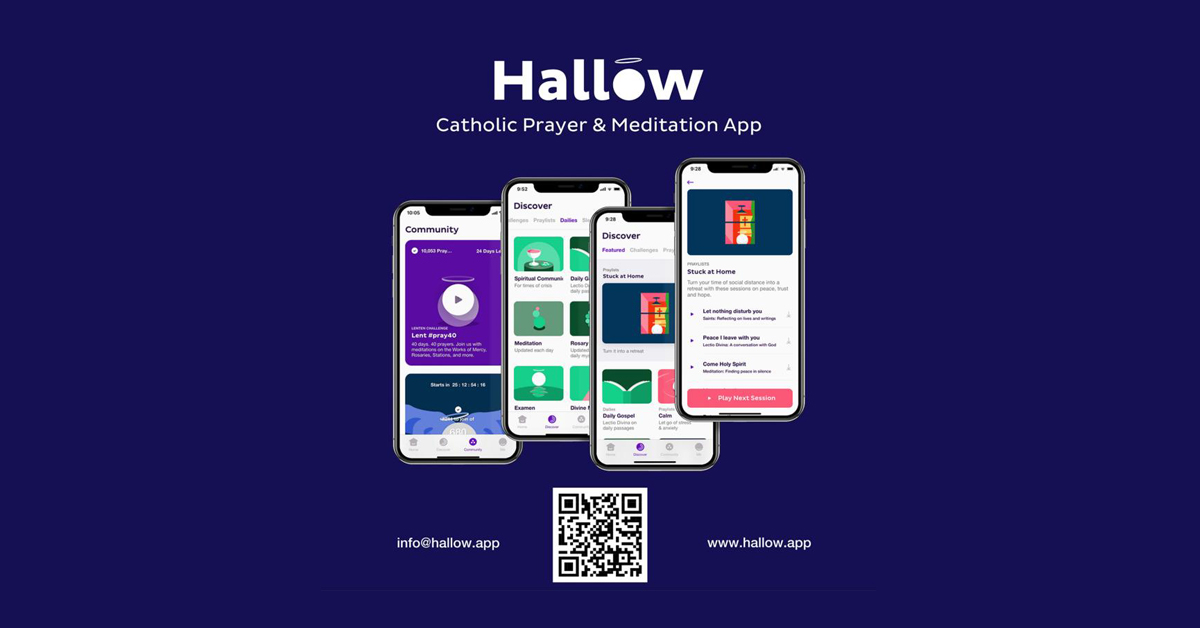 The Catholic app Hallow, which is centred on prayer and meditation. The founders of the app recently added special features to help people cope during the pandemic. (CNS photo/handout via Archdiocese of Chicago)

By Joyce Duriga –  In 2018, Alessandro DiSanto quit a promising job in finance to join friends in starting an app for Catholics centred around meditation and prayer.

That app, Hallow, is now the top Catholic app in app stores, has 150,000 downloads in 50 countries and has been used to pray over 1 million times, according to DiSanto.

The Hallow team also recently launched special features related to the coronavirus for the many people who must stay at home during this time.

DiSanto and some friends with whom he attended the University of Notre Dame came up with the idea when they found they were all struggling with being connected to their jobs all the time and finding little peace in their lives.

“My experience personally was coming from this perspective of being just stressed, having rising anxiety living in a constantly connected world where my life was being run by my email inbox at work,” DiSanto told the Chicago Catholic, newspaper of the Archdiocese of Chicago.

He was working extraordinarily long hours and looking for a way to reduce his stress. People told him that mediation and practicing mindfulness would help. They recommended the apps Headspace and Calm, which he downloaded and used.

“But the more that I created peace in my life in the sense of absence of activity, the more I realized that what I was actually searching for were deeper questions about purpose and what I should be doing with my life,” he said.

“That was inherently a faith-based question for me, and really not addressed by those secular mediation apps.”

In spring 2018, DiSanto’s friend Alex Jones developed a rudimentary version of an app where friends recorded passages from Scripture and spiritual books that they all could use for mediation.

The more time they spent using it and developing it, the more their friends and family showed interest in using it too.

The turning point came when a friend told DiSanto that she had used the app to discern a vocation to religious life.

“That was an ‘Oh, wow’ moment. Certainly, we didn’t do anything. That was God’s grace that moved her heart,” he said. “But it kind of hit us in the head and we thought maybe we should spend time discerning whether we’re being called to build this as a resource for the world to help them find God’s call in their lives.”

So the friends quit their jobs and launched Hallow in December 2018.

It wasn’t easy for any of them to walk away from promising careers in the secular world, but all felt like God was calling them to make the leap.

They launched a Kickstarter campaign to raise initial funding to build the app. Now they have what they call “angel investors” who support their work. They also formed partnerships with parishes and Catholic groups around the country to promote subscriptions.

The app is subscription-based but free to download. Parts of the app are free to users and those areas are updated regularly. That’s a deliberate choice by DiSanto and his co-founders to make it accessible to people who can’t afford a subscription.

Subscriptions cost $60 a year or $9 a month. There is usually a seven-day free trial period for the premium version, but that has been extended to three months because of the COVID-19 pandemic.

The app has several sections, such as “lectio divina,” which is a meditative way of reading the Bible; a daily “examen”; traditional prayers like the rosary and stations of the cross; and “praylists.”

There are several options for meditation, such as one that walks users through the words of the Our Father, prayer challenges and “minute mediations” for when someone just wants a quick check-in with God.

To help people during the pandemic, the Hallow team also released a 15-session “stuck at home” playlist with sessions focused on the power of prayer and finding peace in trusting God.

They are also releasing a function within the app to allow users to create friends and family groups, helping people stay connected to their communities of faith during this time.

Noreen Russo, manager of the Chicago Archdiocese’s Catholic Charities junior board, of which DiSanto is a member, said she’s not surprised Hallow is a success.

“Alessandro’s smart. He’s engaging,” Russo said. “He’s always centred on God and helping people through his faith. I think that’s why his app is so successful.”

For information on Hallow, visit hallow.app