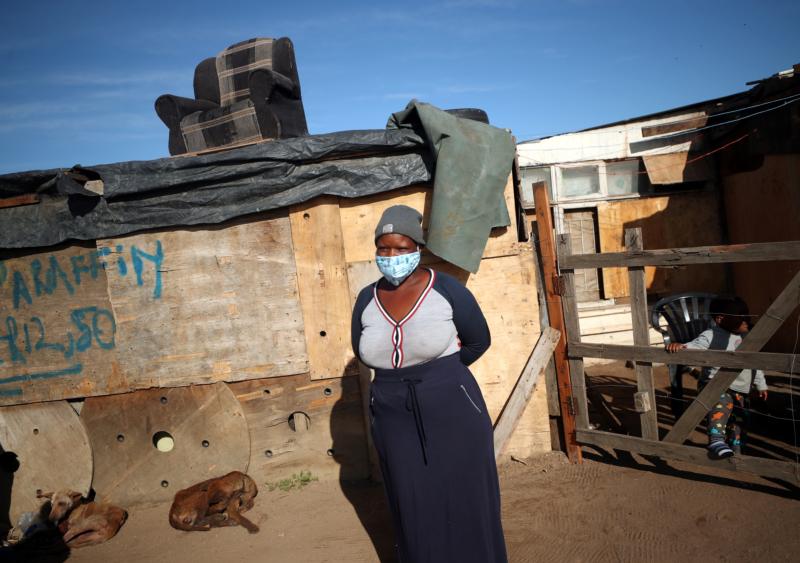 A community volunteer waits to distribute food to the needy in a poor section of Cape Town, South Africa, April 17, 2020, during the Covid-19 pandemic. (CNS photo/Mike Hutchings, Reuters)

By Bronwen Dachs – In his diocese in rural South Africa, “fear, which leads to stigma,” is linked to people coming from the city of Cape Town, said Bishop Joseph Kizito of Aliwal.

Throughout Africa, church officials are working to fight the stigma that comes with the pandemic. But in some areas, people fear death from hunger more than death from Covid-19.

Many people who work in South Africa’s cities regularly return to their rural homes in other provinces. Despite lockdown regulations barring movement between provinces except for those attending funerals, some minibus taxis have escaped being turned back by authorities on the road.

“The feeling here is that Cape Town has a lot more resources” to cope with the effects of the virus, Bishop Kizito said. Besides having well-equipped hospitals, the city has schools that “can cope with online learning, while here we cannot.”

“Our schools are overcrowded,” he said, noting that “there can be 50 children in a classroom, sometimes even 100, and you couldn’t even think about” setting up effective online learning.

“Not having any food to eat and the loss of income” through stringent lockdown measures are the main worries of people in Aliwal Diocese, Bishop Kizito said. South Africa has been in countrywide lockdown since March 26.

The convent of the Sisters of the Holy Cross in Aliwal North has been prepared as a quarantine centre, Bishop Kizito added, so sick people know they have a place to go.

Bishop Kevin Dowling of Rustenburg said church and civil society groups in South Africa “have worked so hard to put an end to stigma and discrimination” against people who are HIV-positive “that I hope this will have some effect as we deal with” the Covid-19.

His team of community workers in the town of Phokeng is working on Covid-19 messages and is “very aware of what we need to be saying” to avoid stigmatising people, he told Catholic News Service.

It matters that all those involved in the diocesan community programs, which focus mainly on HIV and include health services and care for orphans, work in the communities they live in, Bishop Dowling said. “They aren’t seen as coming in from the outside to tell people what to do.”

In neighbouring Zimbabwe, people seem to be unintentionally stigmatising people infected with the coronavirus “because of fear of the state of our health system,” said Yvonne Fildah Takawira-Matwaya, who chairs the Zimbabwe bishops’ justice and peace commission.

Harare’s designated hospital for Covid-19 patients is “seen as a death-trap,” Takawira-Matwaya said May 1.

“Before lockdown, a man who lives two streets from my home was suspected to have symptoms” of Covid-19, she said. “The messages started flowing in the neighbourhood Whatsapp group” one evening and the following day “people would not even approach the gate of his home,” she said.

Zimbabwe’s government declared a national lockdown March 30 and has extended it until mid-May.

Most Zimbabwean households’ income-generating activities “have come to a standstill” and people “fear hunger more than the coronavirus,” Takawira-Matwaya said.

“People feel that they face death either way, but that dying of hunger is worse,” she said.

Homes are very crowded in much of Harare and, with no chance of self-isolation, people who know they are at risk of having contracted the virus often “will not even inform those at home” with them, Takawira-Matwaya said.

In Ghana, Covid-19 stigma is reported to be widespread, even affecting front-line health workers who have been called “coronavirus hunters.”

In one case, “the family of a 19-year-old boy who died of the virus was avoided by their neighbours” and “made to feel very lonely,” Aaron Makafui Ametorwo, a Catholic behavioural scientist working at the University of Ghana in the capital, Accra, told Catholic News Service.

Some communities are said to be driving away recovered patients, he said, noting that one had told him that “the barber refused to trim his hair” and shopkeepers “did not want to sell anything to him” or to his family.

“These and many other instances of stigmatisation pose mental health issues for those who have recovered” and their families in the West African country, Ametorwo said.

In Kenya, Father Wilybard Lagho, vicar general of Mombasa Archdiocese, said stigma is a major problem. “We see a lot of similarities between how communities are reacting to the coronavirus and how they reacted to HIV when it first arrived in the 1990s,” he told Catholic News Service.

“We must work on stigma reduction, delink the coronavirus with death” and abide by the Ministry of Health’s measures, Father Lagho said.

“The doctors and public health officials who responded to HIV and Ebola are believed to be the most useful resource” Kenya has, he added. While Kenya has not had Ebola cases, more than 150 Kenyan medics went to Liberia and Sierra Leone in 2015 to help fight the Ebola outbreak there that killed more than 11,000 people.

In Uganda, Archbishop John Baptist Odama of Gulu said the country’s anti-stigma campaigns for HIV, which included roadside billboards, should be repeated for Covid-19.

“We need to be constant with the messages,” he said, noting that there will be a “need to reconcile those who are affected and those who are not.”