‘A Riot Is The Language Of The Unheard’ 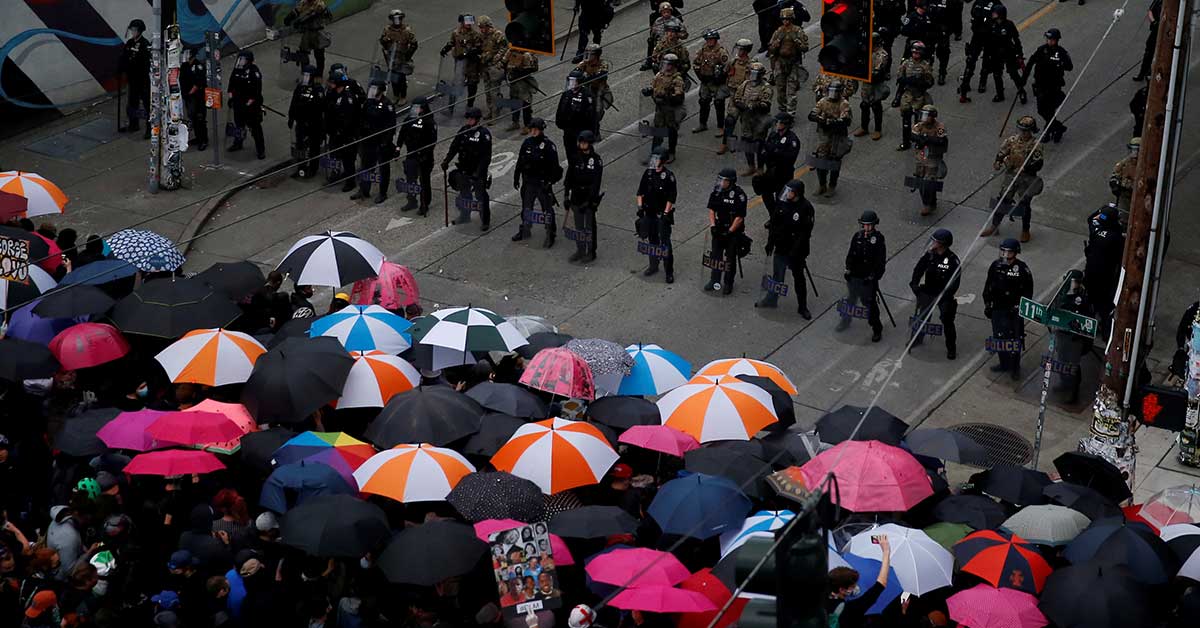 Protesters use umbrellas at the front line of a barricade guarded by Seattle police and the National Guard near a Seattle police precinct June 3, 2020, during a protest in response to the May 25 death of George Floyd — an unarmed black man said to have spent several minutes under a Minnesota police officer’s knee before becoming unconscious. (CNS photo/Lindsey Wasson, Reuters)

Last year I was knocked to the ground and pinned down by an assailant who held his hand over my mouth. I cried out, “I can’t breathe!” About 30 long seconds later he finally let me go.

As I reflect on the heartbreaking deadly scene of a Minneapolis police officer pressing his knee into George Floyd’s neck for nearly nine extremely long minutes, and recall my harrowing encounter, I have a small, gut-wrenching sense of the fright Floyd must have felt when he cried out “I can’t breathe!”

As reported by Democracy Now, friends of Floyd said that he was a mentor to young African American men in Houston where he grew up. He preached “peace, love, God, unity, advocating against gun violence” said Corey Paul, a Houston hip-hop artist who ministered with Floyd.

On Pentecost Sunday, I participated with about 150 black, white, young and elderly people in two peaceful protests in Dorchester County, Md. – where the famous Underground Railroad conductor Harriet Tubman was born and enslaved.

While most of the other protests throughout the U.S. and world were also peaceful, several were violent – tragically causing more innocent deaths and many small businesses being destroyed.

Violence, in all its many evil forms – including riots – is always harmful and hurtful. Violence is never the answer!

Pope Francis said “The violence of recent nights is self-destructive and self-defeating. Nothing is gained by violence and much is lost.”

But in order to end violence, we must seriously probe its root-causes. And to that end the Holy Father also said, “My friends, we cannot tolerate or turn a blind eye to racism and exclusion in any form and yet claim to defend the sacredness of every human life”.

In his article “The Psychology of Rioting: The Language of the Unheard” at Psychology Today, Dr. Joe Pierre, M.D. writes, “Denouncing symptoms of disease without treating the root cause is bad medicine. … The root cause in this case is systemic racism.”

From 1619, when kidnapped Africans were brought for the first time to what would later become the U.S., to the brutal death of George Floyd, it is beyond dispute that countless African Americans have been, and still are, the victims of systemic racism.

Rev. Martin Luther King, Jr., who consistently preached and lived Gospel nonviolence, said in his 1967 “The Other America” speech “I will always continue to say, that riots are socially destructive and self-defeating. I’m still convinced that nonviolence is the most potent weapon available to oppressed people in their struggle for freedom and justice. …

“It is as necessary for me to be as vigorous in condemning the conditions which cause persons to feel that they must engage in riotous activities as it is for me to condemn riots. I think America must see that riots do not develop out of thin air. …

“But in the final analysis, a riot is the language of the unheard.”

“America has failed to hear that large segments of white society are more concerned about tranquillity, and the status quo than about justice, equality, and humanity … Social justice and progress are the absolute guarantors of riot prevention” .

Beginning their letter the bishops quote from Scripture’s First Letter of John, “See what love the Father has bestowed on us that we may be called the children of God. Yet so we are.”

Loving Father, open wide our hearts that we may truly know and live this truth!