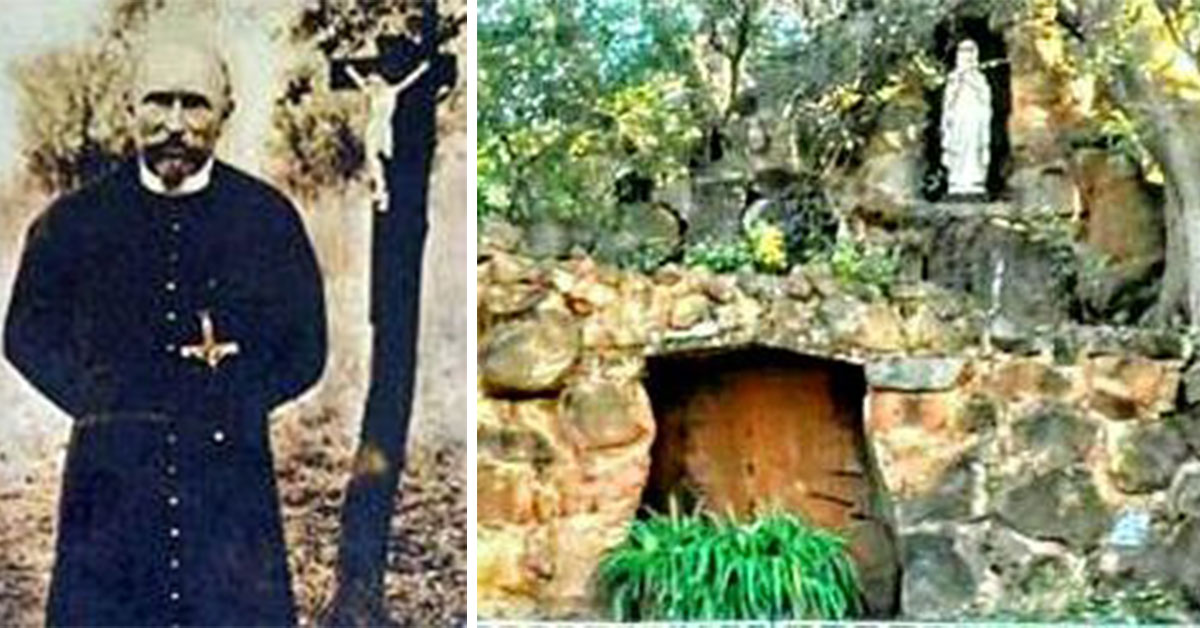 (Left) Fr Camillus De Hovre OMI, the founding priest of Most Holy Redeemer mission in Mmakau. (Right) The grotto at Most Holy Redeemer. It is the only grotto in South Africa purposely built into mountain rock.

As the parish of the Most Holy Redeemer in Mmakau, North-West province, is preparing to celebrate its centenary, DALUXOLO MOLOANTOA looks back at this remarkable community’s first 100 years.

From Here We Shall Never Move. These were the words inscribed almost a century ago onto a cross and mounted on a mulberry tree in a small village to the northwest of Pretoria by Fr Camillus De Hovre OMI.

The Belgian Oblate priest could not have known how these words would act as a forecast to the significance of the Most Holy Redeemer mission in the history of the Catholic Church in Pretoria, and in South Africa in general.

In January 2021, the mission in Mmakau Village will reach a century of existence. It is a centenary steeped in important historical milestones, particularly in the spread of the Catholic faith in Pretoria and beyond.

The beginnings of the mission run parallel to the evangelisation of indigenous African communities in the early to middle 20th century in South Africa.

In essence, its founding is a direct manifestation of the wishes of Bishop Eugène de Mazenod, the founder of the Oblates of Mary Immaculate Fathers.

“It is to the indigenous communities that you have been sent. It is their conversion which the Church expects of the Holy Ministry which has been bestowed upon you,” he told the members of his missionary order.

The Oblates went on to evangelise much of Southern Africa.

At the same time, the founding of the Most Holy Redeemer mission is an example of the few cases where the initiative came from the indigenous people themselves.

Birth of a mission

In his diary entry in May 1921, founding priest Fr De Hovre wrote: “One evening, on returning home at St Teresa’s mission in Bantule Location, I found a deputation of seven men sitting around my dwellings. They had come from De-Wildt [now known as Mmakau Village] to ‘find the True Church’ in Pretoria, as they stated.

“It was the feast of the Epiphany, on January 6, 1921. I saw in this the Hand of Providence. My bicycle came into good use as I began to make several trips to the village to speak to the people.”

In due course, a stone church was built by the people, and Bishop Charles Cox OMI, vicar-apostolic of Transvaal from 1914-24, came to bless and open the building dedicated to the Most Holy Redeemer.

The mission of the Most Holy Redeemer was the first African Catholic mission in what is now the archdiocese of Pretoria.

Its establishment acted as a base from which 68 outstations were later founded. Today they are all fully-fledged congregations in their own right.

From 1921 until 1960 the mission was under the stewardship of the Oblates of Mary Immaculate.

Among many milestones on their watch was the establishment of a mission school: a first for the village.

It was named De-Wildt Primary School and administered in conjunction with a number of congregations, including the Sisters of the Precious Blood and Sisters of the Holy Cross.

It was at the Most Holy Redeemer mission where Fr Joseph Verot OMI published the first Catholic hymns and prayer book in Setswana.

It was also under Oblate superintendence that the mission extended its tentacles into other areas, even beyond its 75km from Pretoria.

Similarly, it was to the Most Holy Redeemer mission that several surrounding communities were directed in their own search for the Catholic faith.

In 1960 the mission was placed under the administration of the Stigmatine Fathers, who still run it today.

The arrival of the Congregation of the Sacred Stigmata heralded a new and vigorous era of missionary endeavour for the mission.

In our human terminology, it was by sheer chance that the Stigmatine Fathers came to South Africa (of course, with God nothing is by chance).

In a section on the Most Holy Redeemer mission for the 1977 centennial book on the archdiocese of Pretoria, Archbishop John Garner recalled: “It was in April 1959 that I found myself in the United States.

“I was on a tour to appeal for funds for our missions. Monday, April 27, I was at the church of Our Lady of Mount Carmel in Spring-field, Massachusetts. I’d arranged for supper with the Provincial of the American province of the Stigmatine priests, Fr Carmen Russo and a number of young Stigmatine priests,” Archbishop Garner recalled.

“During supper, one of the priests casually asked: ‘Archbishop, from what part of South Africa do you come?’ I replied: ‘Pretoria. Fetch me a map, and I’ll show you.’ An atlas was fetched, and I pointed out to the archdiocese and its confines. The Fathers crowded around, looking at the map.

“Then suddenly one of them said: “I wouldn’t mind coming to South Africa.’ Half-jokingly I said: ‘You’d be most welcome. We’ll give you plenty of work!’

“Nothing more was said on the matter. When supper was ended, and while on my way out, Fr Russo took me aside and asked: ‘Archbishop, would you really like the Stigmatine Fathers to come to South Africa?’”

A meeting with the pope

Fast forward to seven months later and to the basilica of St Peter in Rome. It is November 8, 1960. A group of four Stigmatine religious are kneeling at the tomb of St Peter.

Together they recite the symbols of the Apostles. A long silence follows, as if they are trying to draw strength from the rock.

The three priests had already been in the missions. They had spent a total of 19 years in China, before being expelled by the rise of communism and Maoism.

Their experience and age make them aware of the challenging task ahead. This is the reason for the extended period in silent prayer.

Then Br Modena makes a sign on his watch, saying to his confreres: “It is time to see the Holy Father.”

Pope John XXIII receives the four missionaries into his private study. Being a great friend of the Stigmatine Fathers, he enquires from them about their new mission in South Africa.

He then reminds them of that he has heard that the heavy thunderstorms of the Transvaal are comparable to Doomsday.

He offers to pray the rosary for them for the next three days for their future apostolic flock and success.

He takes four pictures from his desk, blesses them and wishes them a safe trip.

Visibly excited at the rare opportunity of a private audience with the Holy Father, and buoyed by his well-wishes, the four make their way to the airport. At 16:00 they board an Alitalia aircraft—by coincidence the first by the Italian airline to Africa—ready for their pioneering mission in South Africa. 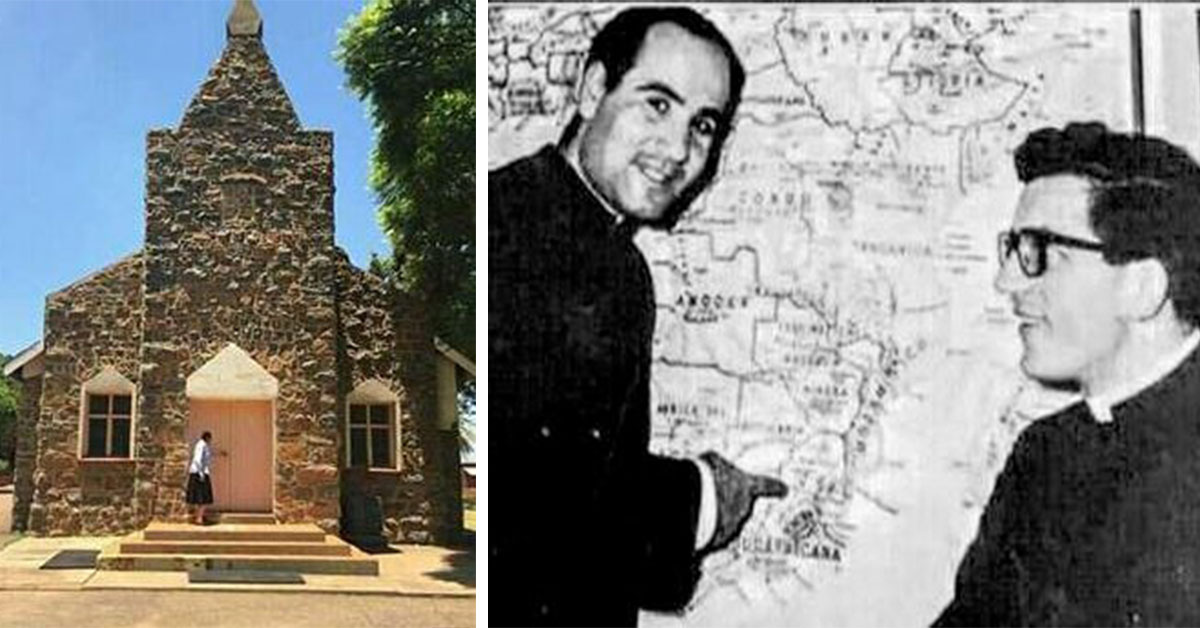 (Left) The original church of the Most Holy Redeemer, built in 1921. (Right) Stigmatine Fathers Michael D’Annucci (left) and Charles Mittempergher, who served the mission in Mmakau for many years after their ordinations. Fr D’Annucci was murdered in a hijacking in Pretoria in December 2001 (he was declared a martyr in 2002); Fr Mittempergher died in Italy in December 2017.

The arrival of the Stigmatine Fathers at the Most Holy Redeemer mission ushered in a revived period of missionary zeal and progress. They hit the proverbial ground running.

In a short space of time, several church buildings went up at the Oblate-founded outstations. New parishes also accompanied the urban townships springing up around Pretoria.

July marks a very important month in the mission’s calendar. It was in July 1923 that Bishop Cox had blessed the foundation stone of the mission. And it was also in July, in the year 1962, that the mission hosted a revered figure.

On July 25, 1962 Cardinal John Baptist Montini, archbishop of Milan in Italy, came to visit the mission.

He was accompanied by Archbishop Garner and Archbishop Joseph McGeough, the apostolic nuncio. The cardinal said Mass for the primary school and spoke at length with local congregants.

Less than a year later, on June 21, 1963, Cardinal Montini was chosen as the new universal shepherd of the Catholic Church. He took the name Pope Paul VI.

As a remembrance of his visit to the Most Holy Redeemer mission, the new pope sent a big Easter candle for the mission. It was used over several years.

Just as the first group of Stigma-tine priests had enjoyed a special papal farewell with Pope John XXII, so did two departing Stigma-tine seminarians, Brs Lino Vinco and Guilliano Melotto, have an encounter with Pope Paul VI before leaving for South Africa, and the Most Holy Redeemer mission in particular.

Two other Stigmatine seminarians had preceeded them to complete their studies in South Africa, at the John Vianney Seminary in Pretoria.

Frs Michele “Michael” D’Annucci and Giancarlo “Charles” Mittempergher were ordained as priests at Most Holy Redeemer in 1966 and 1969 respectively.

The mission and apartheid

From 1973, the Sisters of Mercy began to take a particular interest in the expansion of Catholic education to the mission.

Coupled with the existing primary school, they wished to start a high school for the village.

Negotiations began between the nuns and the parish priest, Fr D’Annucci. The idea was to offer an “alternative” education from the one given in government schools, the Bantu Education system with all its intentional inferior quality.

In 1975 the school opened its doors to new learners. It was named Tsogo High (Tsogo is Setswana for “Resurrection”).

At its opening, Fr D’Annucci urged the new students: “Your task and duty is to fight apartheid and social injustice from the school desk, for a future free, and post-apartheid South Africa.”

At the height of the social unrest of the 1980s, the mission became a natural refuge for many political activists escaping the wrath of the apartheid state.

Many hid in the nearby mountain and came down to the mission at night for food and necessary ablutions provided by the nuns and priests.

In other incidents, activists were hidden in the sanctuary of the nuns’ convent or church, as the security police could not enter those spaces.

Many students of Tsogo High School, as well as activists who benefited from the compassion of the mission, went on to occupy major social, economic and political positions in the new political dispensation after April 1994.

In 1988 another special visitor visited the mission: Mother Teresa.

But the mission also suffered heartbreak, none more so than when Fr D’Annucci, the long-time parish priest, was murdered in Soshanguve by hijackers in 2001.

The Italian missionary known as Masusumetsa (“Changemaker”) “was a great friend of South Africa, and its people”, Nelson Mandela said in remembrance of the priest.

Throughout its illustrious century, the mission of the Most Holy Redeemer has grown exponentially. Added to its scenic natural beauty, it is a lingering expression of enduring commitment to the common good.

Most of all, the 100 years of the Most Holy Redeemer mission symbolise a testament to “Action Through Faith” which sets the scene for the next centenary.