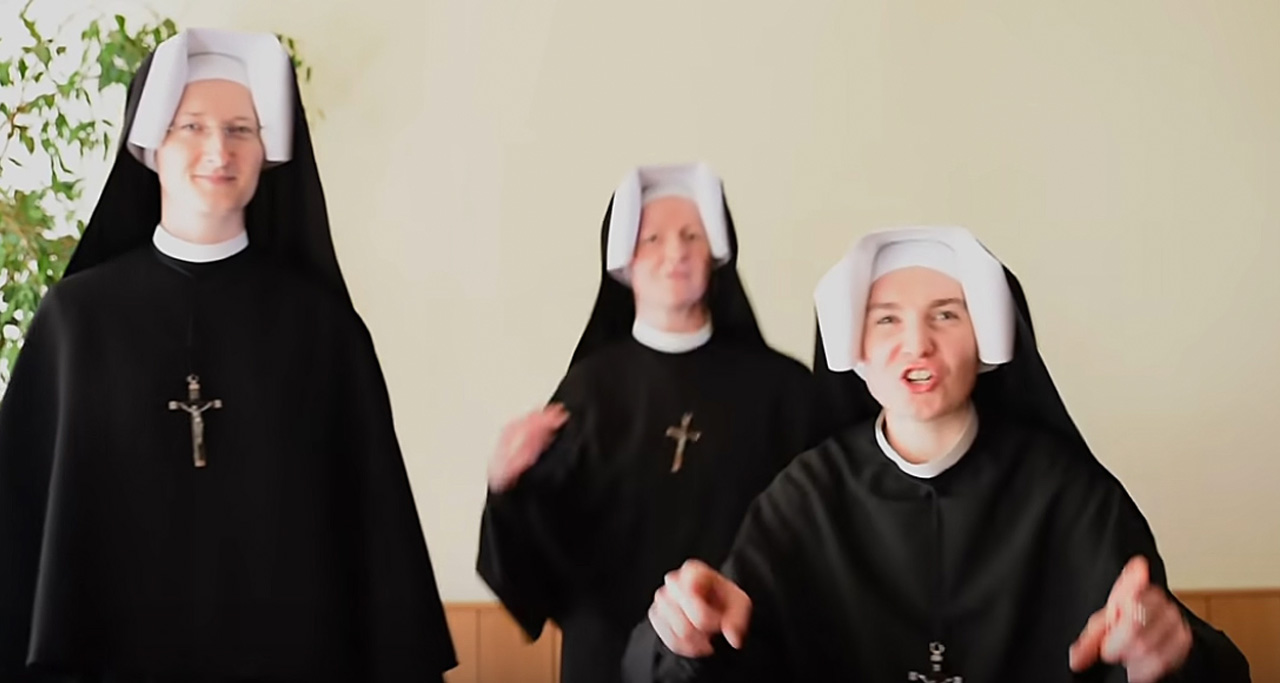 Polish nuns are seen rapping in a screen grab from a YouTube video during the “Hot16Challenge.” Polish rap artists launched the challenge to raise funds for medical staff tackling COVID-19. (CNS photo/YouTube)

When Polish rap artists launched “Hot16Challenge” in late April to raise funds for medical staff tackling the coronavirus, they did not expect their country’s religious sisters would get in on the act.

Within a month, however, as would-be rap stars exchanged nominations, convents nationwide had posted videos on YouTube, alongside Catholic priests and seminarians and even some Polish bishops.

“When it comes to music, we don’t always keep up with the latest stuff, but we’re ready to try new things when the call comes,” explained Sister Emanuela Gemza of the Mother of Divine Mercy Order.

“I immediately realised this was a great chance to evangelise – to show in an untypical way how God cares for us. I think the Holy Spirit guided us in putting the words and melody together.”

Across town, behind the seemingly austere facade of the Order of Presentation Sisters, a trio of bopping nuns instruct listeners to “learn their Calvary rhymes.”

Sister Wanda Putyra said she and her sisters were egged on by students at the school where they teach. They got some coaching in rap techniques, but did not find it as easy as the Divine Mercy Sisters.

“As a church organist, specialising in Bach, I don’t usually do this type of music – and we were worried about getting the rhythm right,” Sister Wanda told Catholic News Service. “Having assumed rap was pretty simple, I quickly discovered it’s actually really difficult. It truly is an art form, and we all now respect the artists who do it!”

Those nominated for “Hot16Challenge” are given three days to compose a 16-line rap, before passing the baton to others.

Within two hours of its launch, the initiative had exceeded its target of 16,000 zlotys ($4,100), and within a week, it had surpassed a million zlotys.

The rap project has now grossed over 4 million zlotys and has drawn in President Andrzej Duda and top government officials, with invitations favourably received by international stars from Ed Sheeran to Snoop Dogg.

Though that isn’t the kind of company Auxiliary Bishop Adrian Galbas of Elk would normally keep, he’s been recorded rapping as well. So has Bishop Marian Rojek of Zamosc-Lubaczow, along with his diocesan chancellor, media spokesman and curial staffers.

Yet it’s Poland’s rapping nuns who’ve gained most attention, with a catchy mix of religious messages and confident performance skills.

Sister Emanuela says it’s a reminder that the Polish church, though firmly orthodox in teaching, is up to date and on the spot, even behind the walls of its convents.

“In our mission to proclaim the Gospel, we’re open to what the contemporary world demands, and I hope those who present us as sad, withdrawn women will now think again,” she told CNS. “The Holy Father has urged us to be a church full of joy, and I’m pleased we’ve found a way to show this.”

Sister Wanda agreed, saying Catholic religious should use their talents to evangelise.

Sister Emanuela is wary about talk of a new cool image for Polish nuns. She insists nuns are cool already and said she and her rapping sisters received overwhelmingly positive reactions, despite the occasional raised eyebrow.

She also was moved to receive messages from agnostics and nonbelievers, who said they’d been helped by the nuns’ example in their search “for a God who listens to them.”