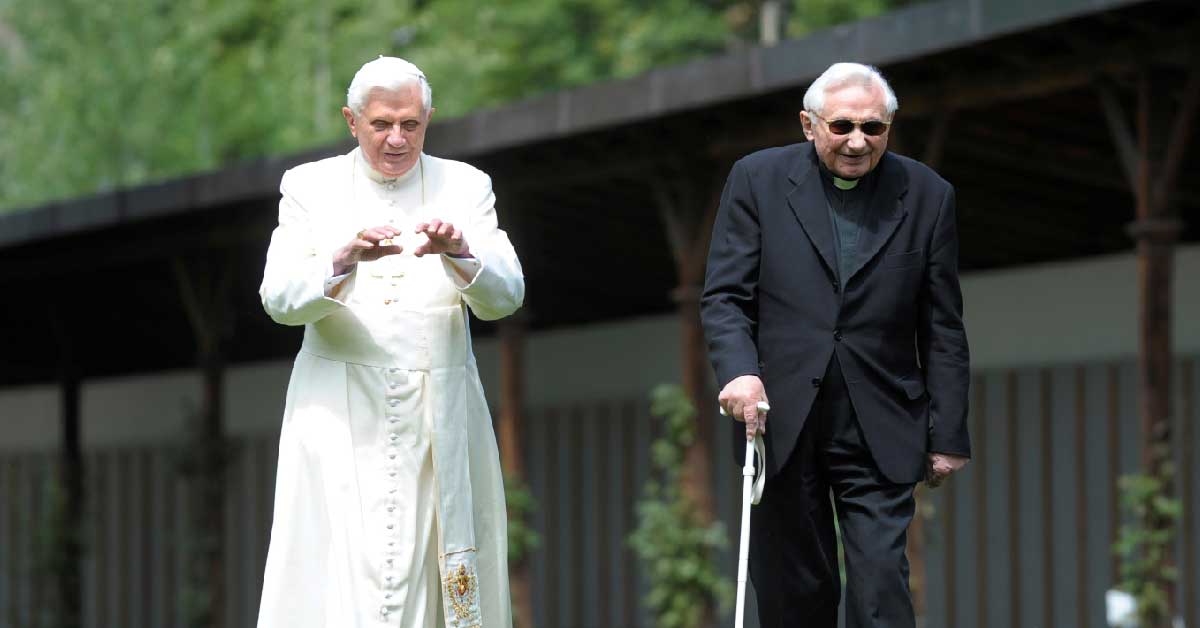 Retired Pope Benedict XVI is seen in a file photo strolling in a garden in Bressanone, Italy, with his brother, Msgr. Georg Ratzinger. The Vatican announced June 18, 2020, that Pope Benedict XVI, who is 93, traveled to Germany to visit his ailing older brother, who is 96. (CNS photo/L’Osservatore Romano via Reuters)

By Cindy Wooden  – Retired Pope Benedict XVI, who is 93 years old, travelled to Germany to visit his ailing older brother, Msgr. Georg Ratzinger, who is 96.

The Vatican press office confirmed that Pope Benedict went to Germany June 18 to visit his brother.

“The pope emeritus is now in the city of Regensburg, where he will spend the time necessary,” said Matteo Bruni, director of the Vatican press office.

Pope Benedict was accompanied by his personal secretary, Archbishop Georg Ganswein, one of the consecrated laywomen who cares for him and his household, a doctor, a nurse and the vice commander of the Vatican gendarme corps, Bruni said.

The two brothers, who were ordained to the priesthood together in 1951, have always been close. While his brother was pope and even after he stepped down from the papacy, Msgr. Ratzinger would come to the Vatican to spend Christmas and a summer holiday with his brother.

While Father Joseph Ratzinger pursued advanced theology studies, served as a professor and an archbishop before moving to the Vatican as prefect of the Congregation for the Doctrine of the Faith and then as pope, Msgr. Ratzinger became famous as director of the renowned Regensburg boys’ choir from 1964 to 1994, when he retired.

A statement posted on the website of the Diocese of Regensburg said, “It may be the last time that the two brothers, Georg and Joseph Ratzinger, see each other in this world,” so it asked people “to leave this deeply personal encounter private.”

The diocese said there would be no “photos, public appearances or meetings” beyond the private encounters of the two brothers.

The retired pope, who apparently was flown to Germany by the Italian air force, landed in Munich late in the morning and was met by Bishop Rudolf Voderholzer of Regensburg, who accompanied him to the city.

Pope Benedict will be staying at the Regensburg seminary, the diocese said. “The date of his return journey has not yet been determined,” it added.

Italian news reports said that before Pope Benedict left the Vatican, Pope Francis met with him at the Mater Ecclesia Monastery in the Vatican Gardens where the retired pope lives.

The Diocese of Regensburg said, “The pope emeritus made the decision to visit his brother in Regensburg shortly after consulting Pope Francis.”