Soon To Be Beatified, Italian Teenager is a ‘Model Of Sanctity’ 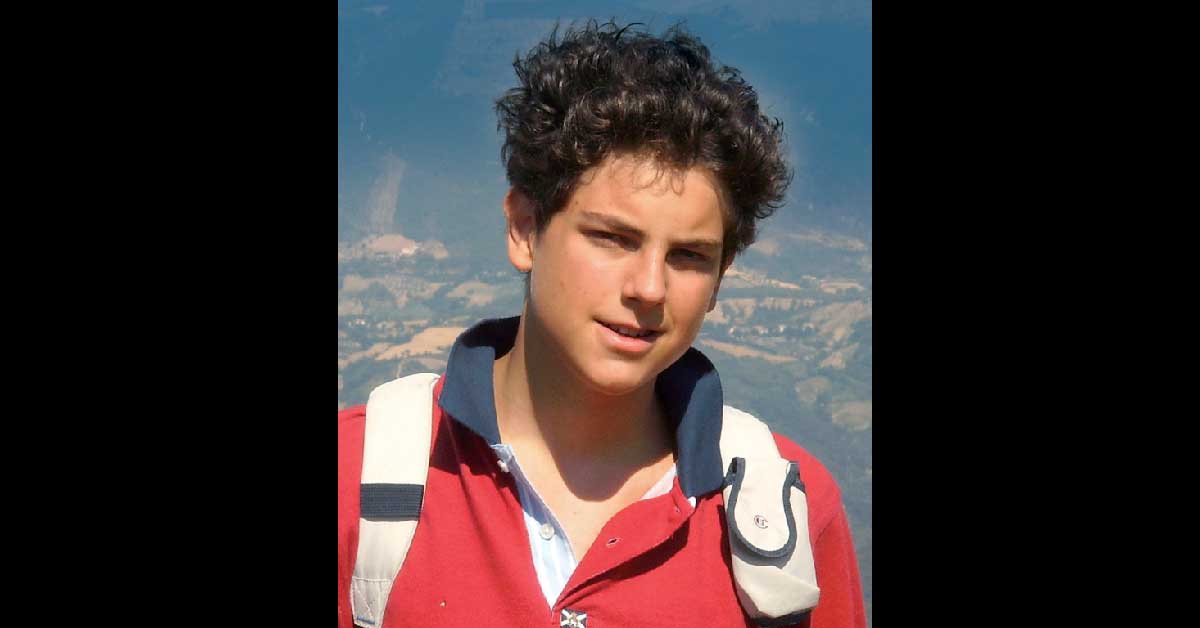 By Jonathan Luxmoore – Carlo Acutis, a London-born Italian teenager who used his computer skills to foster devotion to the Eucharist and will be beatified in October, offers a model of sanctity for Christians in a new era of lockdowns, a British Catholic who lived with his family said.

“What’s struck me most is the exceptional simplicity of his formula for becoming a saint: attending Mass and reciting the rosary daily, confessing weekly and praying before the Blessed Sacrament,” said Anna Johnstone, a professional singer and longtime friend of the teen’s family.

“At a time when new lockdowns could separate us from the sacraments, he’d encourage people to see the rosary as their domestic church and find shelter in the heart of the Virgin Mary,” Johnstone told Catholic News Service.

Acutis, who died of leukaemia in 2006 at age 15, will be beatified Oct. 10 in the Basilica of St. Francis of Assisi in Assisi, Italy. The ceremony had been postponed from spring 2020 because of the coronavirus pandemic to allow more young people to attend.

The teenager developed a database and website that chronicle worldwide eucharistic miracles.

Johnstone said Acutis was convinced “good could be achieved through the internet.” She said Catholics worldwide had found the information he disseminated “massively affirming” during global coronavirus pandemic.

“He would urge young people today to avoid bad aspects of social media and fake news, and to go to confession if they fell prey to it,” said Johnstone, a Cambridge University theology graduate who also acted as governess to Acutis’ twin siblings, born four years to the day after his death.

“But he would also show how the power of the lay life rests in simple, regular devotions. If we’re forced to stay home, with churches closed, we can still find spiritual harbor in Our Lady,” she said.

Born in London May 3, 1991, where his Italian mother and half-English father were studying and working, Acutis received his first Holy communion at age 7 after the family moved to Milan.

He died Oct. 12, 2006, a year after using self-taught skills to create a website, www.miracolieucaristici.org, which lists more than 100 eucharistic miracles in 17 languages.

Johnstone said Acutis had combined the generosity and courtesy of intelligent and hard-working parents, which imbued him with a “sense of purpose and direction.”

She added that he was helped by “sympathetic influences” from a Polish Catholic nanny and Catholic sisters while in school. She said she believed God had been the “direct driving force” behind the boy’s religious journey, which later brought his agnostic mother, Antonia Salzano, to the faith.

“Children sometimes have very intense religious experiences, which can’t be properly understood by others. Though we can’t be privy to what happened, God clearly intervened here,” said Johnstone, who heads rosary groups and exhibitions on the teenager.

His beatification was approved by Pope Francis Feb. 21 after recognition of a miracle due to his intercession involving the 2013 cure of a Brazilian boy.

Johnstone said the “first big surprise” for Acutis’ family had been the huge turnout for his funeral, adding that the rector of his Milan parish, Santa Maria della Segreta, had realized “something was happening” when he later received calls from Catholic groups in Brazil and elsewhere asking to “see where Carlo worshipped.”

“The family has a new life now, but are deeply involved in continuing Carlo’s work, helping with investigations and facilitating access to relevant resources,” said Johnstone, whose father, a former Anglican vicar, became a Catholic priest in 1999.

“Although press coverage has stressed Carlo’s role as a computer geek, his greatest focus was on the Eucharist as what he called his highway to heaven. Though we can’t all be skilled with computers, we can all become saints even during lockdowns, and get to heaven by placing Jesus at the heart of our daily lives,” she told CNS.

Pope Francis commended Acutis as a role model in “Christus Vivit” (“Christ Lives”), his 2019 exhortation on young people, saying the teen offered an example for those who fall into “self-absorption, isolation and empty pleasure.”

“Carlo was well aware the whole apparatus of communications, advertising and social networking can be used to lull us, to make us addicted to consumerism,” the pope wrote.

“Yet he knew how to use the new communications technology to transmit the Gospel, to communicate values and beauty.”