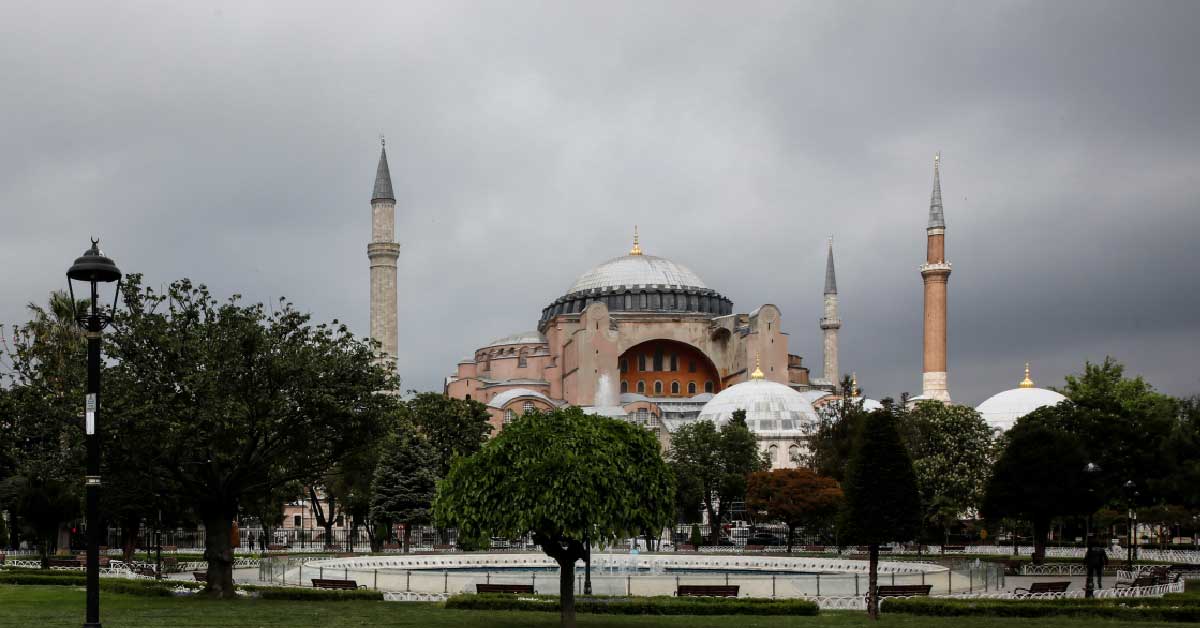 Hagia Sophia museum in Istanbul. The Catholic bishops in Turkey pledged not to contest plans to turn the ancient cathedral that now serves as a museum into a Muslim place of worship. (CNS photo/Umit Bektas, Reuters)

By Jonathan Luxmoore – Catholic bishops in Turkey pledged not to contest plans to turn Istanbul’s ancient Hagia Sophia cathedral that now serves as a museum into a Muslim place of worship.

In announcing their decision June 18, the bishops backed government claims that the monument’s future is a question of national sovereignty.

“We are a church deprived of juridical status, so we cannot give any advice on this country’s internal questions,” the Turkish bishops’ conference said in a statement sent to Catholic News Service.

“Although we would wish Hagia Sophia to retain its character as a museum, it isn’t for us to intervene or even give our opinion on a decision which solely concerns the Republic of Turkey,” the bishops said.

The statement came amid international protests against Turkish government calls for the 6th-century landmark to be converted into a mosque. A plan for the conversion was expected to be approved by Turkey’s highest court July 2.

The bishops said Hagia Sophia, which St. Paul VI, St. John Paul II, Pope Benedict XVI and Pope Francis have visited, originated as “a church in communion with Rome,” but became Orthodox after the 1054 schism between eastern and western churches. It later served for nearly five centuries as a mosque following the Ottoman capture of Constantinople, today’s Istanbul, in 1453.

However, the Orthodox church in neighbouring Greece rejected the planned conversion, describing Hagia Sophia as “a masterpiece of architectural genius, globally renowned as one of the preeminent monuments of Christian civilization.”

“Any change will provoke strong protest and frustration among Christians worldwide, as well as harming Turkey itself,” the church’s governing synod said June 12.

The cathedral, founded by Emperor Justinian I on the site of two earlier churches, was the world’s largest at its dedication in 537. It became a museum in 1935 under modern Turkey’s founder, Mustafa Kemal Ataturk.

In May, Turkish President Recep Tayyip Erdogan confirmed he hoped to annul Ataturk’s decree and reopen the monument to Muslim worship. Abdulahmit Gul, Turkey’s justice minister, told the Anadolu news agency June 15 that the move was “a matter of sovereignty” and reflected the “common wish” of all citizens.

Critics of the move have accused Erdogan’s government of using the planned conversion to boost support for his governing Justice and Development party amid economic hardships exacerbated by the COVID-19 pandemic.

During a November 2014 visit to Turkey, Pope Francis urged greater tolerance for the Catholic Church. The church continues efforts to reclaim about 200 confiscated properties.

In a June 13 tweet, Archbishop Sahak Masalyan, Armenian Orthodox patriarch of Istanbul, proposed permitting both Muslims and Christians to pray in Hagia Sophia, which attracted 3.3 million visitors annually before the pandemic. He said the two faiths could not afford “the luxury of a new cross and crescent dispute.”

UNESCO, which declared Hagia Sophia a World Heritage site in 1985, confirmed that a change in the monument’s use would require international consultation.