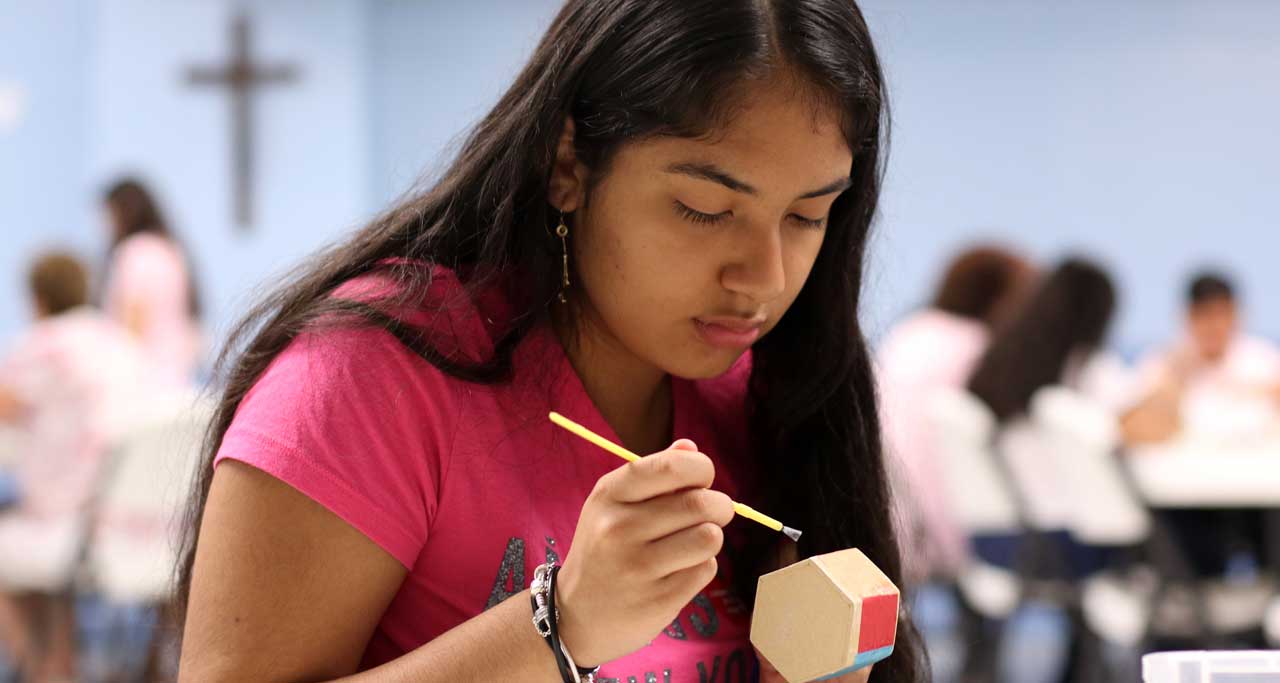 A young woman decorates a box designed to hold a rosary at a catechetical camp in Central Islip, N.Y. (CNS photo/Gregory A. Shemitz)

By Cindy Wooden – Teaching the faith is a work of evangelisation meant to lead people to a deeper relationship with Jesus and not just impart information, said the updated “Directory for Catechesis.”

The directory, released by the Vatican lists the goals and essential elements of catechesis and is meant to guide the drafting of national catechisms and catechetical directories that take into account specifics of the local culture and the needs of Catholics at different ages and stages of life.

Previous versions of the directory were approved in 1971 by St. Paul VI and in 1997 by St. John Paul II.

The directory was released in Italian, Spanish, Portuguese and French; the English and other translations were still being prepared as of June 25.

The updated content, according to the foreword, responds specifically to Pope Francis’ 2013 exhortation, “Evangelii Gaudium” (“The Joy of the Gospel”), and to the 2012 meeting of the Synod of Bishops on the new evangelisation.

Like the previous versions, the directory insists on catechetical programs that teach the basics of Christian faith: God’s love for each person; salvation in Jesus Christ; belief in the Trinity; and “the definitive call to gather scattered humanity into the church,” bringing people into communion with God and fostering unity among them.

While the 1997 directory insisted parishes provide suitable catechesis for members with physical or developmental disabilities, the updated directory expands the discussion to preparation for the sacraments.

The revised directory also includes expanded sections on catechesis tailored for migrants and refugees, for immigrants and for people who are incarcerated.

Because the faith is lived in human communities, it said, catechesis must take into account the challenges and problems of the societies in which Catholics live and should draw on Catholic social teaching, which applies Gospel values to social, political and economic questions.

“Catechesis participates in the church’s challenge to oppose processes centred on injustice, exclusion of the poor and the primacy of money in order to be a prophetic sign” of promoting a full and dignified life for all people, it said.

“Especially in contexts where the divisions among Christians are more visible,” it said, catechesis should “take care to affirm that the divisions are a serious wound that contradict the will of the Lord and that Catholics are called to participate actively in the ecumenical movement, especially with their prayers.”

Technology, social media, online learning and biomedical questions – referenced only in passing in the 1997 directory – are treated in more depth, but always recalling that simply because something is technically possible does not mean it is ethically acceptable.

In other modern issues, the directory said that “a widespread position about what today is presented under the title ‘gender’ calls into question the revealed fact: ‘Male and female he created them.'”

The position, it said, holds that a person’s gender “is no longer an originating fact which the person must accept and fill with meaning, but rather a social construct which one determines autonomously, totally unconnected to biological sex. The person denies his or her nature and decides to create it for him- or herself.”

“The church is well aware of the complexity” some people face regarding their sexual identity, the directory said. “It does not judge people but calls for them to be accompanied always and in every situation. However, it is aware that, from the perspective of faith, sexuality is not only a physical fact, but a personal reality, a value entrusted to the responsibility of the person.”

“Sexual identity and lived experience must be a response to the original call of God,” it said.

The 1997 directory had a paragraph on “environmental catechesis,” which referred to the fact that people living in a rural or urban environment may have different experiences of nature, of poverty and of faith.

The new directory has a section on “catechesis and ecological commitment,” emphasizing how faith in God the creator implies a responsibility to care for all that God created.

“A catechesis sensitive to safeguarding creation will promote a culture of attention both to the environment and to the people who inhabit it,” the directory said.

In 2013 now-retired Pope Benedict XVI shifted responsibility for catechesis from the Congregation for Clergy to the Pontifical Council for Promoting New Evangelization.

In the updated directory, the link between catechesis and the new evangelization is clear and it calls for a “missionary transformation” of catechism programs.

“Evangelisation occupies the primary place in the life of the church and in the everyday teaching of Pope Francis. It could not be otherwise,” Archbishop Rino Fisichella, president of the pontifical council told reporters June 25.

“Evangelisation is the task that the Risen Lord has entrusted his church,” he said. “To ignore this premise would be tantamount to making the Christian community one of just many meritorious associations, strong in its 2,000 years of history, but not the church of Christ.”

Among its guiding principles, the directory listed the church’s “firm trust in the Holy Spirit, who is present and acts in the church, in the world and in the hearts of men and women.” That affirmation, it said, should bring joy, serenity and a sense of responsibility to all who are called to teach the faith.

The directory also insists that while faith is born of a personal encounter with Jesus, that encounter takes place through and grows within the community of the church, that every baptized Catholic is responsible for sharing the faith and that belief always must give rise to witness through acts of charity.

And while church teaching does not change from continent to continent, the way it is proposed and explained will be most effective only if it considers the language, culture, age and experience of those listening, it said.

“The Gospel is not addressed to an abstract person, but to each real, concrete, historic person who is living in a particular situation and marked by psychological, social, cultural and religious dynamics,” the directory said.

Effective catechesis also must be adapted to each person’s age and state of life, it said. “Faith is not a linear process” and each stage of growth can bring new and different challenges and raise new questions about how best to live one’s Christian vocation.

And, it said, if faith is a gift that is passed on through and grows in a community, it is especially true of the family, which deserves the assistance and support of the church in carrying out its role as the first and primary teacher of faith.