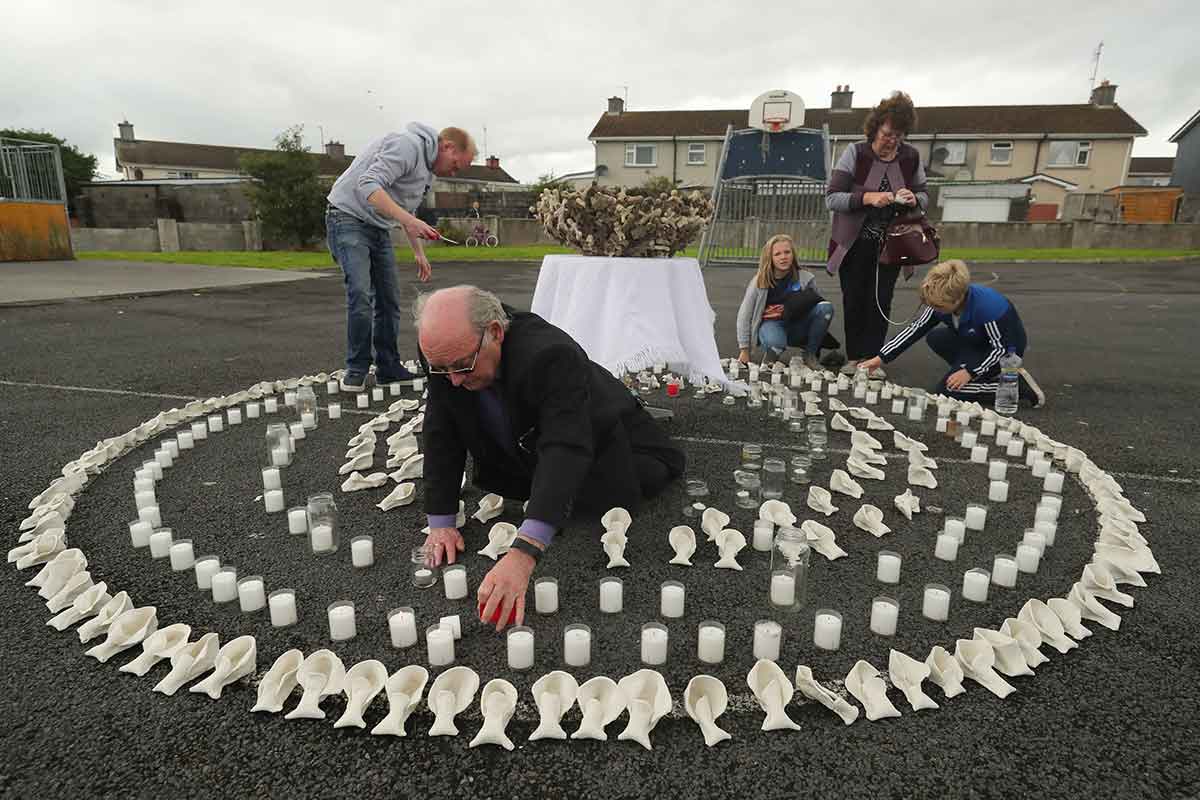 Aiden Corless lights a candle in the middle of artwork made up of clay child shoes at the site of the former state-funded, Catholic-run home for unmarried mothers in Tuam, Ireland — where a mass grave of 796 babies was uncovered- in this 2018 photo. The Vatican ambassador to Ireland has backed the idea that the babies should be reburied in consecrated ground. (CNS photo/Niall Carson, Reuters)

By Michael Kelly – The Vatican ambassador to Ireland has backed a campaign to have the government rebury the remains of infants and children found in a mass grave at a Catholic-run home.

Campaigners say they hope the support of Archbishop Jude Thaddeus Okolo, papal nuncio, will put pressure on the government to act when the report of a Commission of Investigation into the deaths at the home in Tuam is released later this year. The report had been due to be released in June, but in mid-July, a spokesman for the Department of Children told Catholic News Service that he expected it to be released in October.

Historian and campaigner Catherine Corless, who gathered death certificates for 796 infants linked to the home run by the Bon Secours sisters, has been told by Archbishop Okolo that he shares Tuam Archbishop Michael Neary’s view that there should be a “dignified re-interment” of the remains in consecrated ground.

Corless said: “It is uplifting really to know that the Vatican is behind us. … (This) is going on six or seven years now, and it is a long time to be dragging it out.

“I would hope this might put a bit of pressure on the government to wake up and let them know we haven’t faded away, we are still here and we need the final report and the exhumation of the remains,” Corless said.

A Commission of Investigation was established to inquire into the treatment of, and dealings with, women and children in 14 mother and baby homes between 1922 and 1998. It was set up following claims that up to 800 babies may have been buried in an unmarked grave in the site in Tuam.

Excavations of the site in 2017 showed “significant quantities of human remains” in a 20-chamber underground structure near a decommissioned sewage tank. DNA analysis confirmed the ages of the dead children ranged from 35 weeks’ gestation to three years and that they were buried chiefly in the 1950s.

Corless has been working for several years on records associated with the institution. The children’s names, ages, places of birth and causes of death were recorded. The average number of deaths during the 36-year period was just over 22 a year. The information recorded on these state-issued certificates shows that the children died variously of tuberculosis, convulsions, measles, whooping cough, influenza, malnutrition, bronchitis and meningitis, among other illnesses.

Infant mortality in Ireland in the 1930s and 1940s was in the region of 70 per 1,000, as high as countries in sub-Saharan Africa have now. For much of the period covered, mortality rates among so-called “illegitimate children” was five times that of the rest of the population.

Archbishop Neary has repeatedly said it was a “priority” for him to rebury the babies’ bodies in consecrated ground.

In his letter dated July 15, Archbishop Okolo said he agreed with the local bishops and that he hoped everyone could work together to “rectify the mistakes of the past.”

Corless said the reply “means a lot to us and to each and every survivor.”

Ongoing delays by the government were “heartbreaking” for survivors, many of whom “are afraid they won’t last, they won’t live that long to see justice done,” she added.

“It is really degrading for all survivors. They are being treated like they always were, as if they’re not important, they are second-class citizens. I hope this might make the government aware that we are very much here and we haven’t gone away,” she said.