Bishop In Mozambique Is Target Of Campaign For Criticising Government 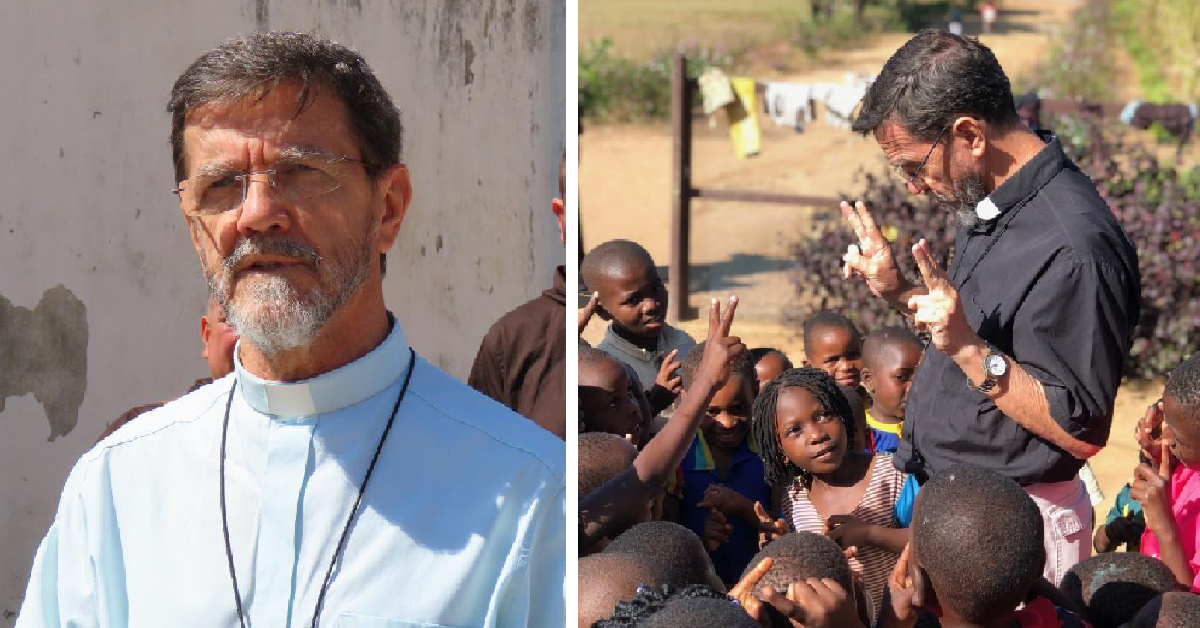 Bishop Luiz Lisboa of Pemba in Mozambique who is the target of a campaign by government to discredit him after he criticised them for not doing more to help those displaced in the northern region of Cabo Delgado. (Photos: Archdiocese of Sao Paulo/Aid to the Church in Need/CNS)

By Eduardo Campos Lima – A papal phone call to Bishop Luiz Fernando Lisboa of Pemba, Mozambique, was not just an expression of concern about his diocese, but a sign of support during a defamation campaign launched by Mozambique’s president.

Since the beginning of the attacks in the province of Cabo Delgado in 2017, Bishop Lisboa has been one of the few voices calling attention to the violence and its social consequences. More than 1,100 people already died and 250,000 have been displaced in the armed conflict between Muslim insurgents and the army, but the violence remains mostly unknown to the international community.

Bishop Lisboa’s denunciations of what he called the “government’s lack of transparency” in its campaign apparently displeased Mozambican leaders. On August 15, during a visit to Cabo Delgado, President Felipe Nyusi accused “certain foreigners” of lacking respect for “the sacrifice of the ones who keep this young nation standing”, disguising their attitude with the “human rights” agenda.

“That commentary was undoubtedly aimed at Bishop Lisboa. His work has enormous relevance. If it wasn’t for him, the world wouldn’t know what’s happening in Cabo Delgado,” said Adriano Nuvunga, director of the Centre for Democracy and Development, a nongovernmental organisation in Mozambique that promotes democratic values.

The centre released a statement Aug. 18 condemning not only the president’s verbal attack on Bishop Lisboa, but also the manifestations that followed it on social media, particularly the ones posted by a few journalists who support Nyusi. One of them, Egidio Vaz, accused Bishop Lisboa of being a “logistical supporter” of the terrorists and of giving them supplies.

“I believe the Vatican may be able to get rid of such an embarrassment but only by excommunicating him. He’s a criminal. I don’t know why the Mozambican state still keeps his residence permit,” Vaz said on Facebook to his 31,000 followers.

The wave of defamation against the bishop rang the alarm on his safety. On social media, many in the African country compared his situation to the case of the French-born lawyer Gilles Cistac, killed in 2015 for suspected political reasons.

Mr Cistac had displeased the ruling party, Frelimo, when he publicly gave a favourable legal opinion on the creation of autonomous provincial administrations, a platform backed by Renamo, the main opposition force in Mozambique. Mr Cistac’s murder has not been solved.

“They would never get to the point of killing Bishop Lisboa. He’s a member of the Catholic Church,” said Nuvunga.

Although the relations between the Mozambican government and the church have always been tense due to the defence of human rights by Catholics, said Nuvunga, the institutional relevance of the church and the great number of organisations that support the bishop make any act of violence against him “unthinkable.”

“Bishop Lisboa’s only ‘fault’ was to tell the world about the atrocities in Cabo Delgado. The system — and particularly the president and a small group around him — doesn’t want anybody to know about it. Their strategy will be to pressure the church to remove him,” Nuvunga added.

In almost three years of conflict, the government has done little to help the thousands of displaced people, said Brazilian-born Father Pedrinho Secretti, a Pallottine missionary in the province.

“It’s a total omission. Who assumed the role of being the voice of the people, who gives them food, who helps them in all levels is the bishop,” he told Catholic News Service.

Father Secretti said most families in the southern regions of Cabo Delgado now give shelter to other families, who came from the war zone.

Bishop Lisboa has made “a huge effort during the pandemic to assist the sick and the neediest ones. The diocese’s Caritas has been very active in helping the displaced families,” he added.

Dulce Coutinho is one of the victims of the war. She had to flee Mocímboa da Praia, a town recently occupied by the terrorists, and moved to Pemba. She said many of her neighbours were forced to abandon their homes without looking back, leaving even their documents behind.

“People have lived there for centuries and now are being either killed for no reason or obliged to go away. It’s an alarming situation, and the bishop is worried about his people. He couldn’t be indifferent to all that,” she told CNS.

A port town, Mocímboa da Praia is a strategic location near Palma, where a project of natural gas exploitation is being implemented by international corporations. The northernmost zone of Cabo Delgado, where the town is located, is also rich in other mineral resources, like rubies and graphite.

Mocímboa da Praia was captured by the jihadists around Aug. 11, reported DW.com. Father Secretti said two Sisters of St. Joseph of Chambery have disappeared since then, and the diocese is still waiting for news on them.

The attacks on Catholic targets have been recently increasing. A few months ago, churches and houses of missionaries were invaded and vandalised. Many lay Catholics in the region were killed. Although Mozambique has a majority of Catholics, in Cabo Delgado they’re outnumbered by Muslims.

“The church is following all the events and suffers with the people,” said Passionist Father Latifo Fonseca, who directs Pemba’s Catholic radio station. He said Bishop Lisboa is being “misunderstood” in his denunciation of the problem.

“But he’s calm and knows the consequences of having a prophetic voice. He’s doing his role as a pastor and telling the truth to the people,” Father Fonseca said.

Regarding the current defamation campaign, Bishop Lisboa told CNS he considers that the target is not him, but the church.

“The church is invited to reveal the truth and to work for justice and peace. But the truth always hurts. The church in Mozambique has been talking for a long time about the importance of social and democratic coexistence,” he said.

“What’s at stake here is not the persecution of a bishop, but to the most important of the church’s values: justice, truth, and peace,” he added.