Cardinal Pell Tells US Catholics: ‘We Rely On You’ 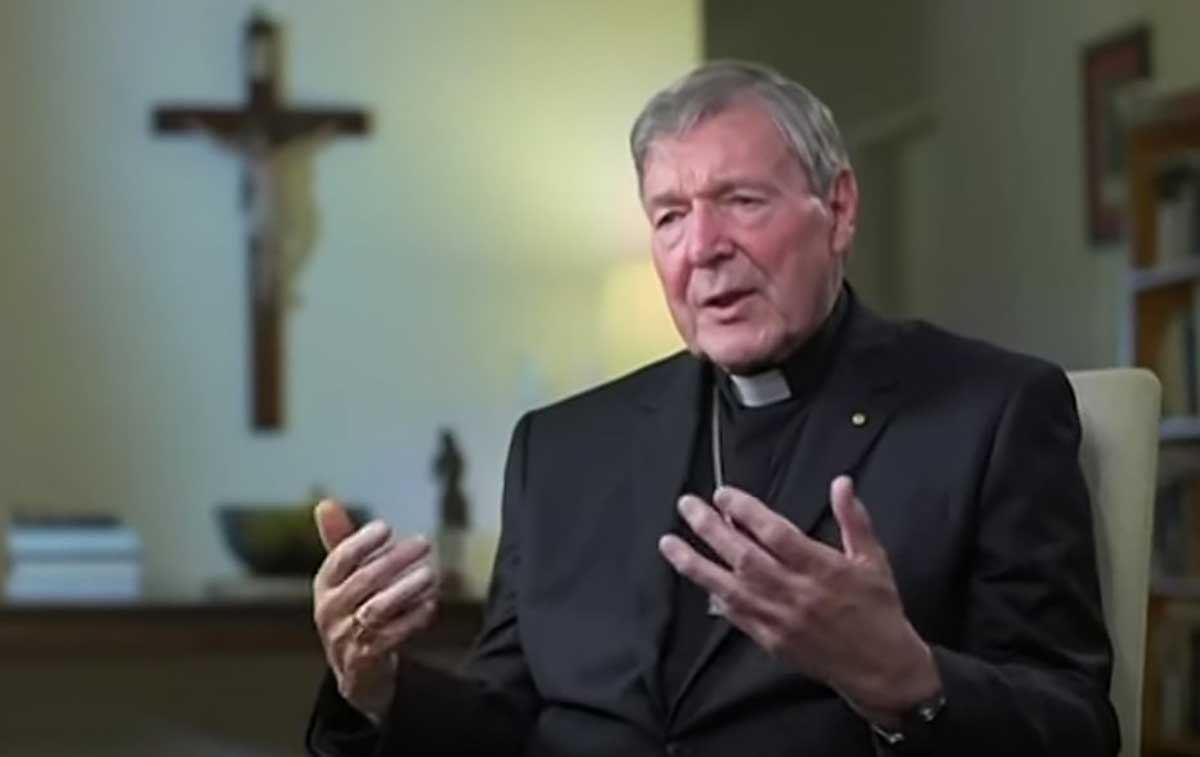 Cardinal George Pell is pictured in a screen grab during an interview that aired April 14, 2020, on Sky News Australia. (CNS screen grab)

By Peter Rosengren – In an exclusive interview prerecorded and aired at a US conference, Cardinal George Pell reminded his audience how important the church in the US is for world Catholicism and Western civilisation.

US Catholicism “is vitally important for us in smaller countries, we rely on you for your scholarship, your leadership … the pastoral strategies that you implement and prove to be successful will be watched and imitated by us,” he said.

Despite the scandals in church leadership, which had been “deeply wounding,” many parts of the church in the U.S. are offering a way forward in the present crisis. He named U.S. bishops such as Archbishop Jose H. Gomez of Los Angeles, Archbishop Salvatore J. Cordileone of San Francisco, Cardinal Timothy M. Dolan of New York and the late Cardinal Francis E. George of Chicago as outstanding examples of church leadership and vision in the present era.

The 30-minute interview was conducted in Sydney and shown at a conference organised by the NAPA Institute, a California–based think tank focusing on the Catholic Church. Cardinal Pell spoke to Monica Doumit, columnist for The Catholic Weekly, about issues ranging from Vatican finances to progress against clerical child abuse in Australia to watching U.S. televangelists from prison.

The cardinal, former head of the Vatican Secretariat for the Economy, spent 405 days in prison on charges of abuse dating from 1996. In April, Australia’s Supreme Court ruled in relation to all charges of molesting two 13-year-old choirboys, “there is a significant possibility that an innocent person has been convicted.”

Cardinal Pell, who left the Vatican to return and face the charges, told The Catholic Weekly “the crooks” have largely been run out of Vatican financial institutions or denied access to them, but vigilance is required to prevent corruption and inefficiencies that have been endemic in the past.

Cardinal Pell said his successor at the Vatican told him the Vatican was losing AU$70 million ($US50.4 million) a year before the pandemic struck. Meanwhile, the Vatican Museums, which were closed for three months and reopened with limited visitors, would normally bring in revenue of at least AU$80 million a year.

Meanwhile, he said, it is public knowledge that the Vatican has “a looming, very considerable deficit in the pension fund – and nearly every other country in Europe has that, too – but that’s not much consolation.”

“Now I’m well out if it, I’m two or three years behind what people are thinking, but at least in the public sense, I haven’t seen any suggestions that would really address what is a significant financial challenge,” he said.

Reiterating comments made earlier this year to Sky News, Cardinal Pell said there was no denying clergy sex abuse crimes were committed and had been poorly handled by church authorities, “but in Australia we broke the back of the offending in the middle ’90s.” He said that had even been acknowledged by counsel assisting the Royal Commission Into Institutional Responses to Child Sexual Abuse during its proceedings.

Catholics would be astonished to know how little offending had actually occurred in recent decades, he said.

“I heard of a public meeting where a friend of mine who actually knew what was going on asked the authorities in that diocese ‘how many offences in that diocese have you had in Catholic institutions this century?’ And there were none or almost none. And the Catholic audience there was stupefied,” he told The Catholic Weekly.

During his time in prison, since he was unable to offer the Mass for the intentions of others as he ordinarily would, he instead prayed the Memorare, a prayer seeking the intercession of Mary, as individual requests came to him.

“In jail you’ve got no excuse that you’re too busy to pray,” he said. “I had a regular prayer routine of the breviary, meditation and I followed spiritual reading generally every day. And on Sunday, I watched Mass For You At Home at the impossible hour of six o’clock in the morning.

“Then I watched the American evangelists Joseph Prince from California and Joel Osteen from Texas. And in my journal I’d make a theological critique of their efforts – but both of them are very fine preachers and they’ve got big followings.”

He said there is no doubt the church throughout the Western world faces a serious situation demographically and politically, but he remains optimistic and sees signs of renewal, especially in new church realities such as Opus Dei and the Neocatechumenal Way.

Opus Dei, founded in post-Spanish Civil War Spain by St. Josemaria Escriva, focuses on helping young people and adults to discover and live sanctity via friendship with God. The Neocatechumenal Way, founded also in Spain in 1968, focuses on building small communities following a path of formation toward an adult faith, with a strong emphasis on coming to know the Word of God and its associated themes in Scripture.

The path to irrelevance for the church is already obvious, he said.

However, if the church remains faithful to Christ, he said, there’s always the chance that new forces of renewal and leadership will arise.