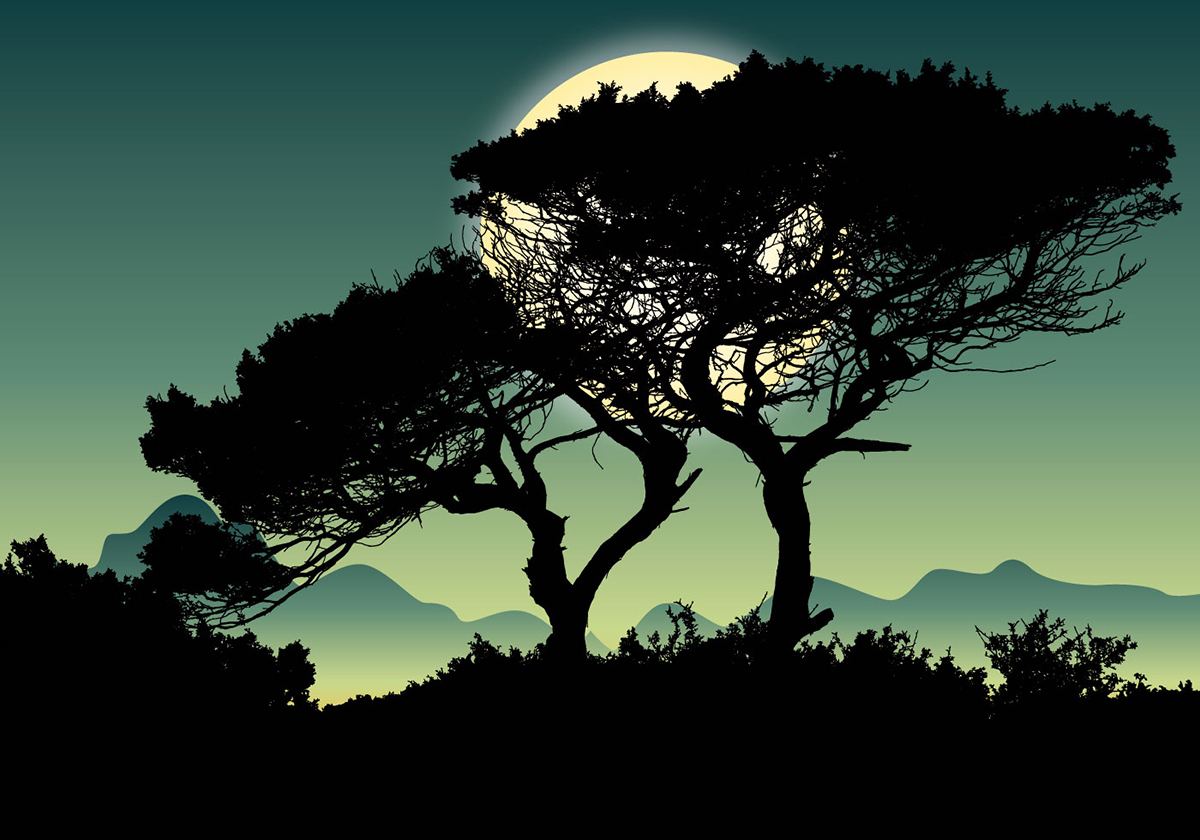 By Cindy Wooden – During the height of the Covid-19 lockdowns in Europe and North America, city-dwellers – including Pope Francis – were struck by the hush on the streets, the blueness of the skies and the songs of birds.

The experience gives added meaning to the theme of the 2020 celebration of the Season of Creation, “Jubilee for the Earth: New Rhythms, New Hope.”

The Season of Creation begins on September 1, the World Day of Prayer for the Care of Creation, an observance initiated by the Orthodox Ecumenical Patriarchate of Constantinople in 1989 and adopted by Pope Francis for the Catholic Church in 2015. The season runs through to October 4, the feast of St Francis of Assisi.

The theme, “Jubilee for the Earth,” refers to the biblical jubilee years in Leviticus 25 – a sacred time every 50 years for renewing one’s relationship with God, restoring justice to individuals and letting the land recuperate.

Father Joshtrom Isaac Kureethadam, an official at the Dicastery for Promoting Integral Human Development, said the theme was chosen by an ecumenical organising group before the Covid-19 pandemic began. They wanted to commemorate the 50th anniversary of Earth Day on April 22.

But, “the theme has become so relevant in the context of lockdown, and the pandemic is still raging across the world,” he said. While the lockdown had a hugely negative impact on the poor, who could not work from home, it “gave us a taste of an environment with much less pollution, the skies were clear, the dolphins came back” to the waters off of Italy.

The “small gap” of the lockdown, he said, showed that, if given a chance, “nature can flourish again.”

In a joint letter urging Christians to mark the celebrations, the ecumenical Conference of European Churches and the Catholic Council of European Bishops’ Conferences said the biblical call to a jubilee “underlines that there must exist a just and sustainable balance between social, economic and ecological realities.”

“The lesson from the biblical concept of jubilee points us toward the need to restore balance in the very systems of life, affirming the need for equality, justice and sustainability and confirming the need for a prophetic voice in defence of our common home,” said the letter released on August 25.

Celia Deane-Drummond, director of the Laudato Si’ Research Institute at Campion Hall at England’s Oxford University, said a jubilee implies rest for the land – by, for example, letting a field lie fallow for a year – and rest for human beings, especially those enslaved by others, but also those who feel driven to work almost 24/7 for earnings or status. 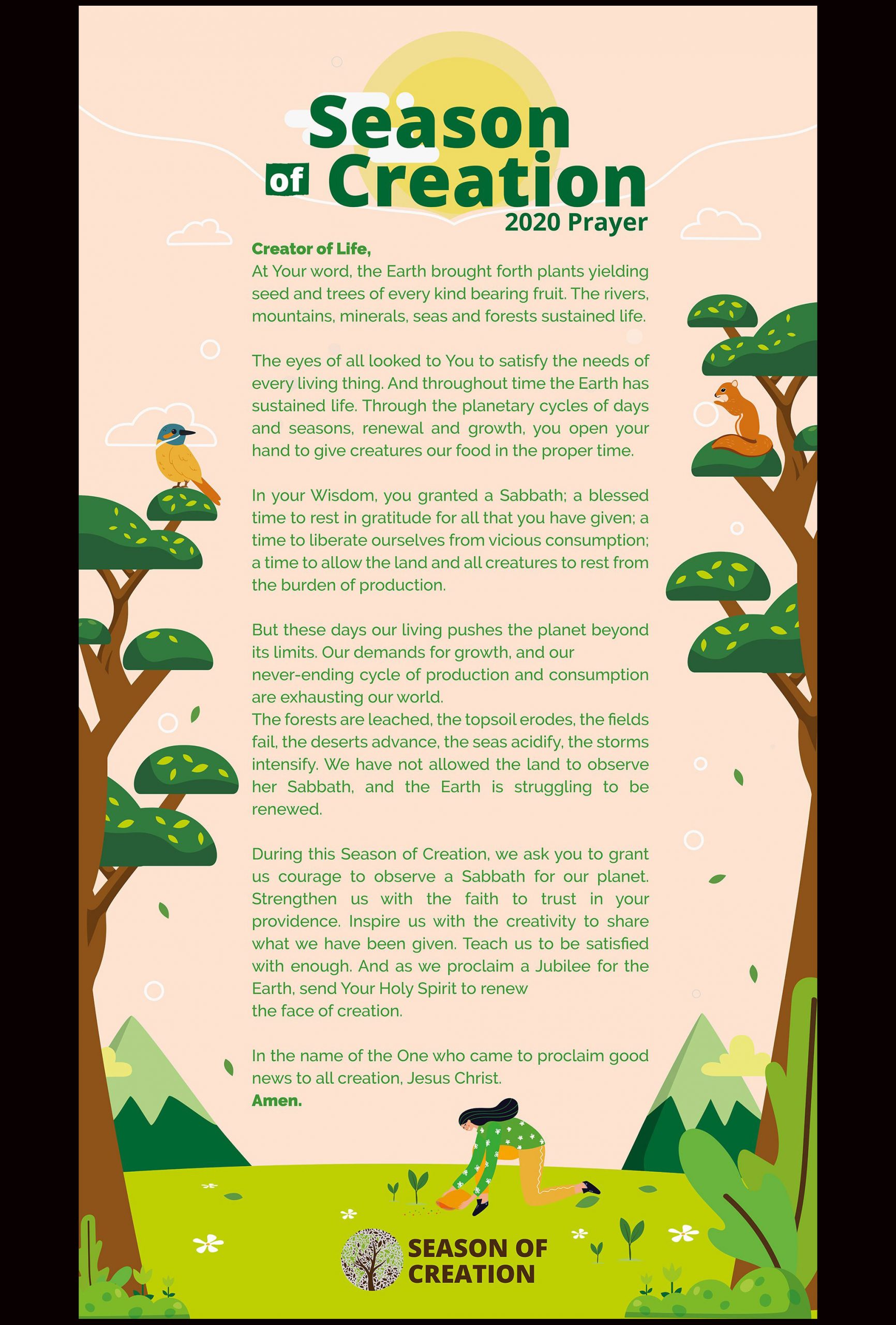 This prayer for the 2020 Season of Creation Sept. 1-Oct. 4 asks God’s help in making people aware that, just as people and animals need rest, so does the earth. The theme for the ecumenical celebration is “Jubilee for the Earth: New Rhythms, New Hope.” (CNS photo/courtesy Global Catholic Climate Movement)

“That’s what integral ecology is all about it; bringing together the cry of the earth and the cry of the poor means not focusing on one or the other but both at the same time,” she told Catholic News Service Aug. 25. “Trying to get a balance between those aspects is sometimes quite challenging, but a jubilee is sort of like, ‘Let’s stop and listen and think about how we need to do things differently.'”

The professor, who has doctoral degrees in both biology and theology, said she thinks there are things people learned during the lockdown that will endure. For example, she expects online meetings to continue to replace many international conferences, reducing the carbon footprints of people who fly all over the world for meetings. Also, she said, many people will continue to enjoy beauty they discovered in their own neighbourhoods and the joys of walking, hiking or running near home.

But another important aspect of a jubilee is forgiveness, she said. “The tendency is to put too much emphasis on blaming people for the crisis we’re in and not enough on the mercy of God and forgiveness and the possibility of starting again or of doing things differently.”

“I would always want to go back and say, ‘Well it’s not too late'” if an individual or business owner takes responsibility for harming the environment and truly changes, which is different from “green washing,” the practice of marketing a company as environmentally friendly when it is not.

Pope Francis’ call to “listen to the cry of the poor or of our ailing planet” has been consistent since the publication five years ago of his ecological encyclical, “Laudato Si’, on Care for Our Common Home.”

But that call has been more insistent during the coronavirus pandemic.

At his weekly general audience on August 19, Pope Francis defined as a “scandal” government pandemic assistance to companies that “do not contribute to the inclusion of the excluded, the promotion of the least, the common good or the care of creation.”

“Greedy for profit, we let ourselves get caught up in things, and lured away by haste,” Pope Francis said during a special prayer service in an empty, rain-soaked St. Peter’s Square in March.

People did not “listen to the cry of the poor or of our ailing planet,” he said. “We carried on regardless, thinking we would stay healthy in a world that was sick.”

Father Kureethadam said invoking a jubilee and encouraging prayer is a holistic approach to environmental concern; it includes asking forgiveness of God and of one another.

“Our real hope and prayer is that it will allow us to renew humanity, renew solidarity, renew ourselves in our relationship with God and with one another and the environment,” he said.

Marking the fifth anniversary of Laudato Si’ in May, the pope published a prayer that asked God to “enable us to succeed in listening and responding to the cry of the Earth and the cry of the poor. May their current sufferings become the birth-pangs of a more fraternal and sustainable world.”