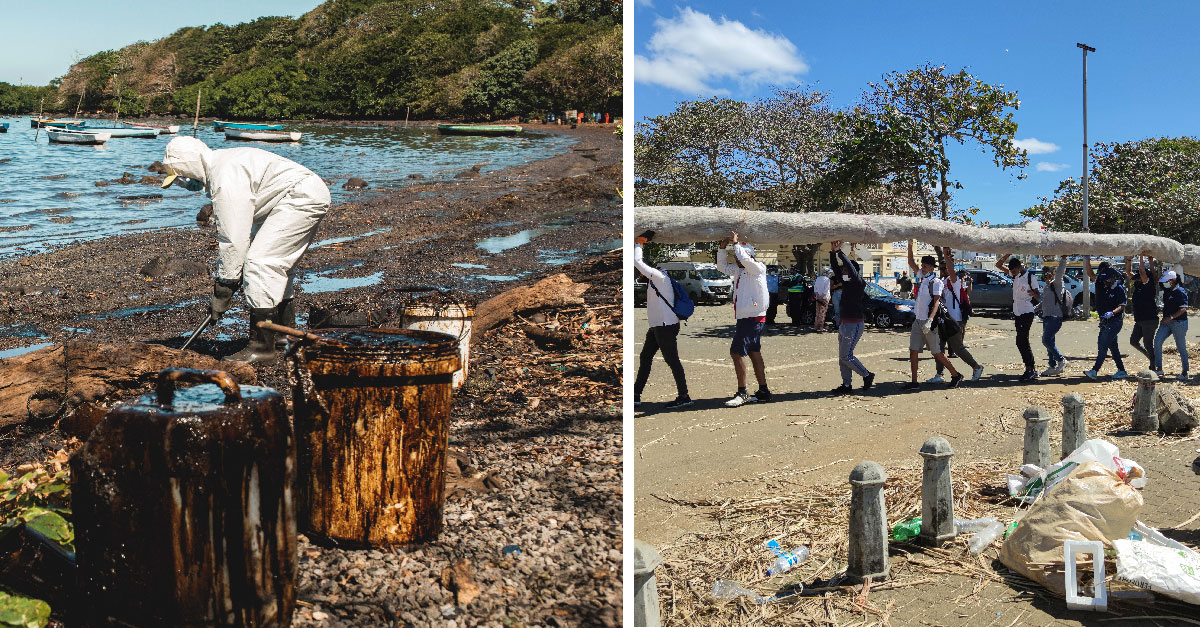 By Jonathan Luxmoore –  Cardinal Maurice Piat of Port-Louis, Mauritius, has praised public responses to an oil spill that devastated the island’s coastline, as one prominent lay Catholic demanded “honest information” about the disaster.

“Numerous families are afflicted by a pestilential and persistent odour – fishermen and all those living from the sea are suffering particularly, while ecological treasures in our coastal bays and islets are gravely damaged,” said Cardinal Piat.

“Amid the pain shared by so many, I salute the beautiful outpouring of active and enterprising solidarity now showing itself in a bid to save what might still be saved.”

The 79-year-old cardinal issued the message as desperate efforts continued to contain oil from the Japanese bulk carrier, MV Wakashio, which ran aground on a coral reef off Pointe d’Esny. The ship flew a Panamanian flag, which allows it to avoid marine regulations imposed by Japan.

Cardinal Piat said he was encouraged to see “civil society awakening” with a “fine ecological conscience,” in ways that he said should be “taken into account by economic and political decision-makers.”

However, a senior lay Catholic warned that the Indian Ocean country’s unique marine ecosystem, one of the few remaining worldwide, looked set to suffer lasting damage and said the disaster left “many unanswered questions” about the Japanese tanker’s presence.

“This ship ran aground in the worst possible place – a habitat for many protected species, when our country was still closed to tourists because of Covid-19 – it’s an ecological catastrophe,” Martine Lajoie, assistant chief editor of the church’s La Vie Catholique weekly, told Catholic News Service on  Aug. 14.

“But Mauritius is facing another crisis as well, when those running the country are not trusted. Even if they say truthful things, people won’t believe them,” she added.

The tanker, owned by Nagashiki Shipping, became stranded July 25 off the southeast coast, with 3800 tons of heavy oil and 200 tons of diesel, and was reported breaking up Aug. 3.

Pravind Jugnauth, prime minister of Mauritius, said Aug. 13 most of the remaining fuel had now been transferred to shore by helicopter.

However, Greenpeace Africa said the oil slick had spread over 26 Square kilometres by Aug. 11, leaving thousands of rare species “at risk of drowning in a sea of pollution.”

Father Jean-Pierre Arlanda, rector of Our Lady of the Angels Parish at Mahebourg, one of the worst-affected ports, told a radio station local Catholics had “mobilised immediately,” using knowledge and skills, as well as staging a “cycle of prayer and solidarity.”

Ms Lajoie said the crisis had strengthened religious and cultural ties on the island, adding that its Interreligious Council would stage a national interfaith prayer service Aug. 16.

However, she cautioned oil was still flowing from the Japanese carrier and was certain to force the closure of Mauritius’ Blue Bay Marine Park and other internationally known areas, as well as wrecking the livelihoods of those dependent on tourism.

“We also need honest information about who bears responsibility for this disaster, at a time when our economic situation was already difficult,” she added. “What will happen to Mauritius now that its lagoons and beaches are wrecked?”