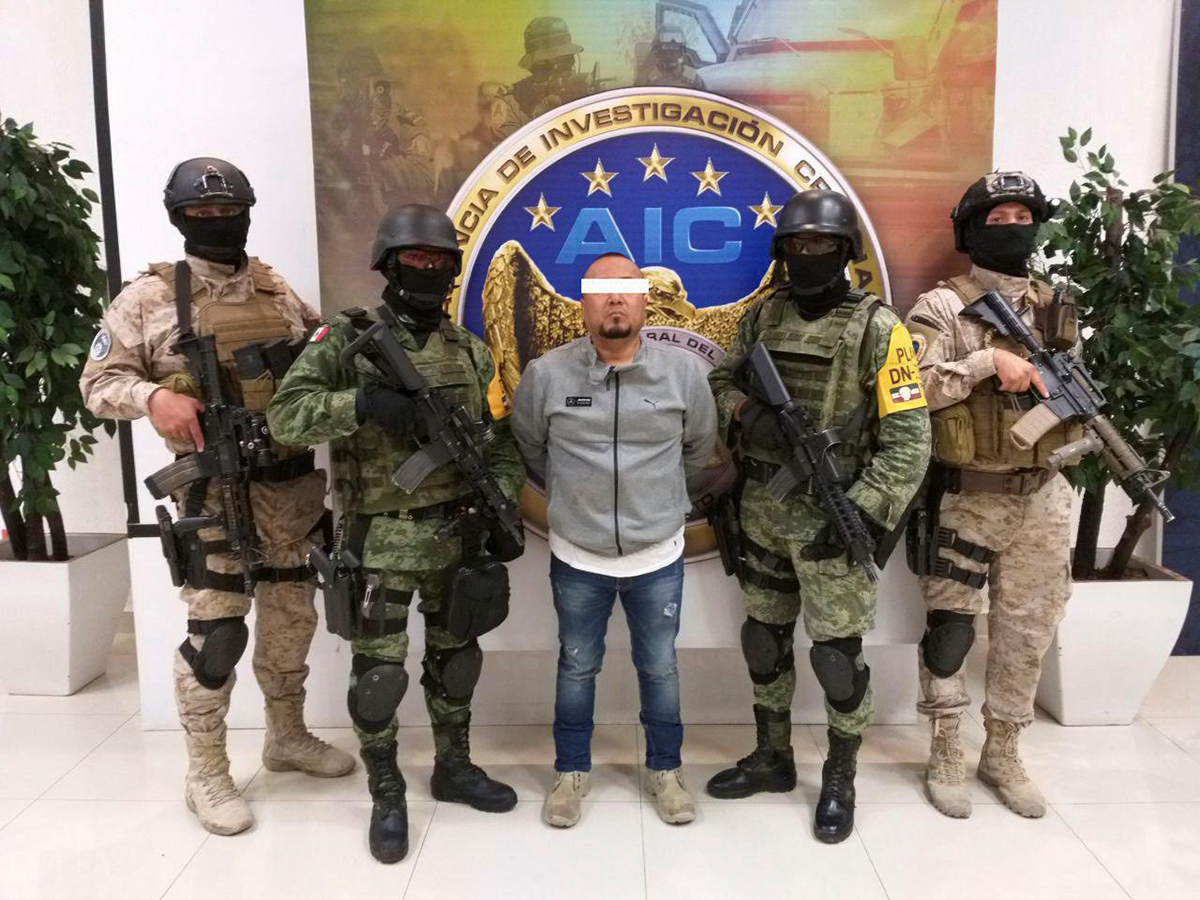 Members of the federal forces flank Jose Antonio Yepez, a crime boss known as El Marro, after his capture in Franco Tavera, Mexico, Aug. 2, 2020. Stories about El Marro’s supposed generosity with the Catholic Church and devotion to Our Lady of Guadalupe surfaced almost immediately after his arrest. (CNS photo/Guanajuato Attorney General’s Office via Reuters)

No sooner had federal forces arrested José Antonio Yépez Ortiz – a crime boss known as “El Marro,” or the sledgehammer – than stories surfaced of his supposed generosity with the Catholic Church and devotion to Our Lady of Guadalupe.

El Marro led a fearsome crime organisation, the Santa Rosa de Lima cartel, which siphoned gasoline from Pemex pipelines and fenced it, among other illegal activities. This turned the state of Guanajuato, the country’s conservative, Catholic heartland, into the most murderous state in Mexico. He also built a shrine to Our Lady of Guadalupe outside his home in the town of Santa Rosa de Lima and maintained another shrine in the community.

“I know that El Marro has respected the church, but not in another way,” Bishop Benjamin Castillo Plascencia of Celaya told local media after the arrest, when asked about donations known as “narcolimosnas,” or drug alms. “I don’t think there’s anything. If not, let them prove it.”

El Marro’s arrest in August cast uncomfortable suspicions on the Catholic Church and once again highlighted its troubled relationship with drug cartels and organised crime.

It also highlighted the tendency of drug cartel members – from kingpins to peons – to consider themselves proper Catholics and publicly profess their piety, even as they commit atrocious crimes.

Narcos can also be generous; they sponsor patron saints’ feast days, fix up parishes and build shrines to saints or pseudo-saints, often overriding the objections of village priests in remote regions where criminal groups hold sway.

“Mexican cartel thugs have grown up in a totally religious atmosphere … with a formation that is heavy in religiosity, popular religiosity, which has evolved over time and has created this syncretism,” said Pauline Father Omar Sotelo Aguilar, director of the Catholic Multimedia Centre, which tracks attacks on priests and has produced a series of films known as “Hermano Narco” (Brother Narco).

“Many of the people who make up these groups, these cartels, have this custom or this way of approaching (the church) to seek protection” through religion, he added.

The relationship between church and crime is often a complicated one, according to analysts and priests interviewed by Catholic News Service. Mexico ranks as the world’s most lethal for priests, and many of the murders have occurred in rural regions rife with drug cartel activities.

“The pastor, being in some way a figure of spiritual power, who offers services … who protects the community, tends to be sort of seen as competition for these groups,” said Father Sotelo.

When a priest is killed, it sends the message, “If I’m able to kill a priest, I can kill anyone,” he added.

Mexico’s most notorious slaying of a prelate involved Cardinal Juan Jesús Posadas Ocampo, who was slain in a hail of gunfire outside the Guadalajara airport in 1994.

One account has it he was confused for Sinaloa cartel boss Joaquín “El Chapo” Guzmán, though the case still remains in the realm of impunity. Stories also surfaced of Cardinal Posadas having had a relationship with leaders of the Tijuana cartel and accepting donations for building a seminary, said Bernardo Barranco, a commentator and church observer.

In 1997, Father Raúl Soto, canon of the Basilica of Our Lady of Guadalupe, mentioned the name of a drug cartel boss, then said: “We would love to give the tithe (that) he gives. … If sinners do it, we want to do it more.”

Bishop Ramón Godínez of Aguascalientes, now deceased, said in a 2005 interview that money donated to the church could be cleansed.

In 2011, it was revealed that the leader of the bloodthirsty Los Zetas cartel had built a chapel in Hidalgo state. The chapel had a plaque recognising his patronage and was being used for church services.

“What we have from anecdotes is there’s a long-standing relationship, at least since the 1980s,” Barranco said.

Priests in troubled regions of Mexico told Catholic News Service that they see organised crime members attending services, but only tossing a few pesos in the collection plate.

Narcolimosnas are “fiction,” said Father Alan Camargo, spokesman for the Diocese of Matamoros, which borders the Rio Grande Valley of Texas. “At least here in the north, no one says, ‘I’m donating a shrine.’ I think its fiction or something that happens in other places.”

“Perhaps they come to Mass because they’re Catholic and leave 10 pesos in the collection like everyone, but not a donation,” said Father Carlos Ayala, spokesman for the Diocese of Apatzingán.

Priests sometimes have little influence over what occurs, with cartel members often acting without seeking permission and sometimes employing coercion.

“Guerrero is in the hands of narcotics traffickers and everyone works for them. … When we do our pastoral work, it is necessarily among them,” said Bishop Salvador Rangel Mendoza of Chilpancingo-Chilapa. One of his priests was forced at gunpoint to celebrate a religious service during a town’s fiesta during the pandemic.

Attempts to reach a spokesman for the Diocese of Celaya were unsuccessful. Bishop Castillo, however, spoke of similar stories of priests being surrounded by cartel members while working.

But he claimed that one of El Marro’s men supposedly said to him, “The day that we go against the church, (El Marro) will kill us.”