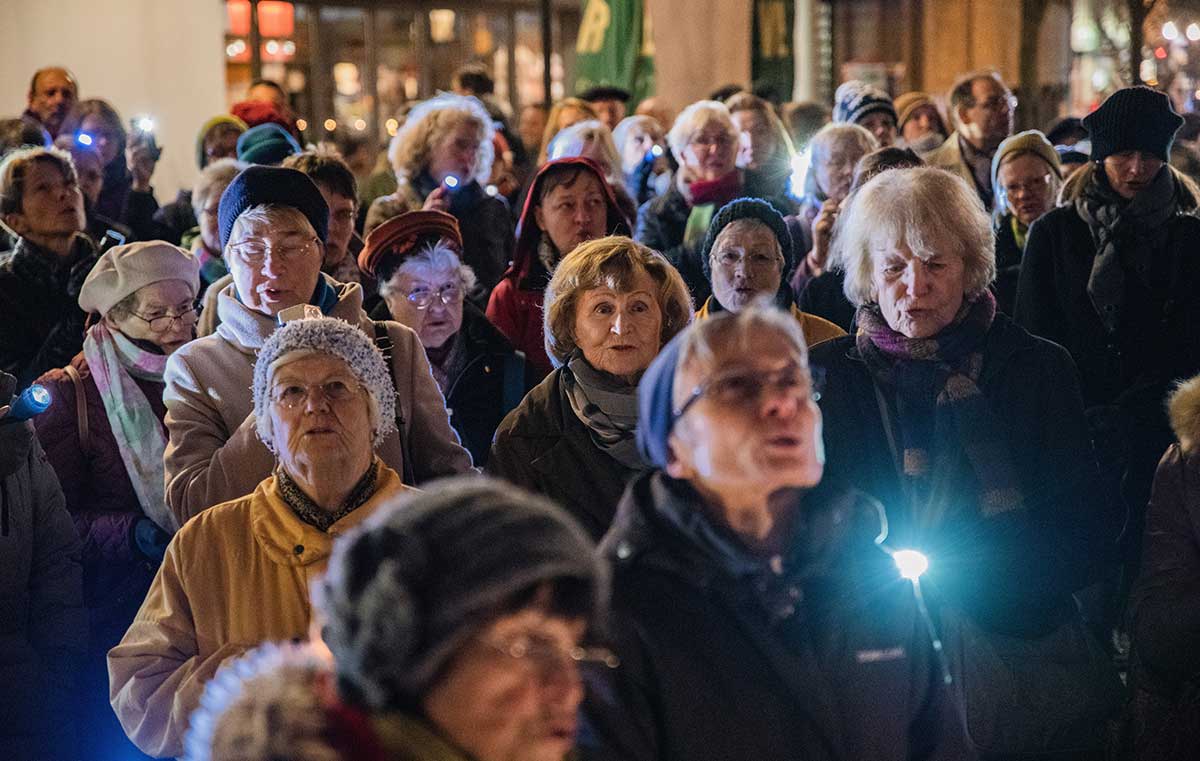 Women shine flashlights on the main entrance to the Imperial Cathedral in Frankfurt, Germany, during a 2018 protest against sexual abuse in the Catholic Church in their country. The act was to symbolically bring light into the darkness of abuse. (CNS photo/Bert Bostelmann, KNA)

A new survey of heads of German Catholic religious orders found abuse allegations against at least 654 members over a period of decades, reported the German Catholic news agency KNA.

The survey of 392 orders found at least 1,412 children, adolescents or wards were the victims of sexual abuse. Of the victims, around 80% were male and around 20% female, KNA reported.

Franciscan Sister Katharina Kluitmann, president of the German Conference of Catholic Superiors, said there was an unquantifiable additional number of unreported cases. She said the victims had suffered additional pain from the way they were treated by leaders and other members of orders.

“We deeply regret this and acknowledge our failure once again,” she said.

The German Conference of Catholic Superiors sent a questionnaire to the heads of the orders in 2019 and received responses from around three quarters of them (291 of 392), covering 88% of the members of religious orders in Germany today.

Of those, 100 orders said they had been confronted with accusations of various forms of abuse. While some orders reported more than 100 cases, most of the others said there had been fewer than 10.

Abuse accusations were recorded by 53 of 77 male religious orders and 47 of 214 female orders. About 80% of people accused of abuse have died.

In addition to the 654 members of religious orders, an additional 58 members of staff faced accusations.

Sister Kluitmann said the survey was a further step in the investigation into abuse in religious orders. She did not claim that it amounted to scientific research and said the German Conference of Catholic Superiors lacked the financial and staff resources for that. As a result, the survey could not be compared to the abuse study conducted by the German bishops’ conference.

The Conference of Catholic Superiors gave no time frame in its survey, KNA reported.

With regard to payments to victims in recognition of their suffering, the religious orders are seeking a uniform system with the bishops’ conference. However, they said they needed financial support. A concept adopted by the bishops in the spring provides for sums of between 5,000 euros (R100,000) and 50,000 euros (R1 million) per case.

A victims’ association, “Eckiger Tisch” (Nonround Table) criticised the survey, saying most religious orders had refused to accept responsibility for too long.

“And even now they think they have all the time in the world to first enter talks on whether and how they want to investigate their history of violence and sexual abuse,” said the association’s spokesman, Matthias Katsch.

He demanded that all the records of the religious orders should be secured and made available to state prosecutors if there was any suspicion of sexual child abuse. Under no circumstances should the victims be denied adequate compensation on the grounds of orders being impoverished, Katsch stressed.