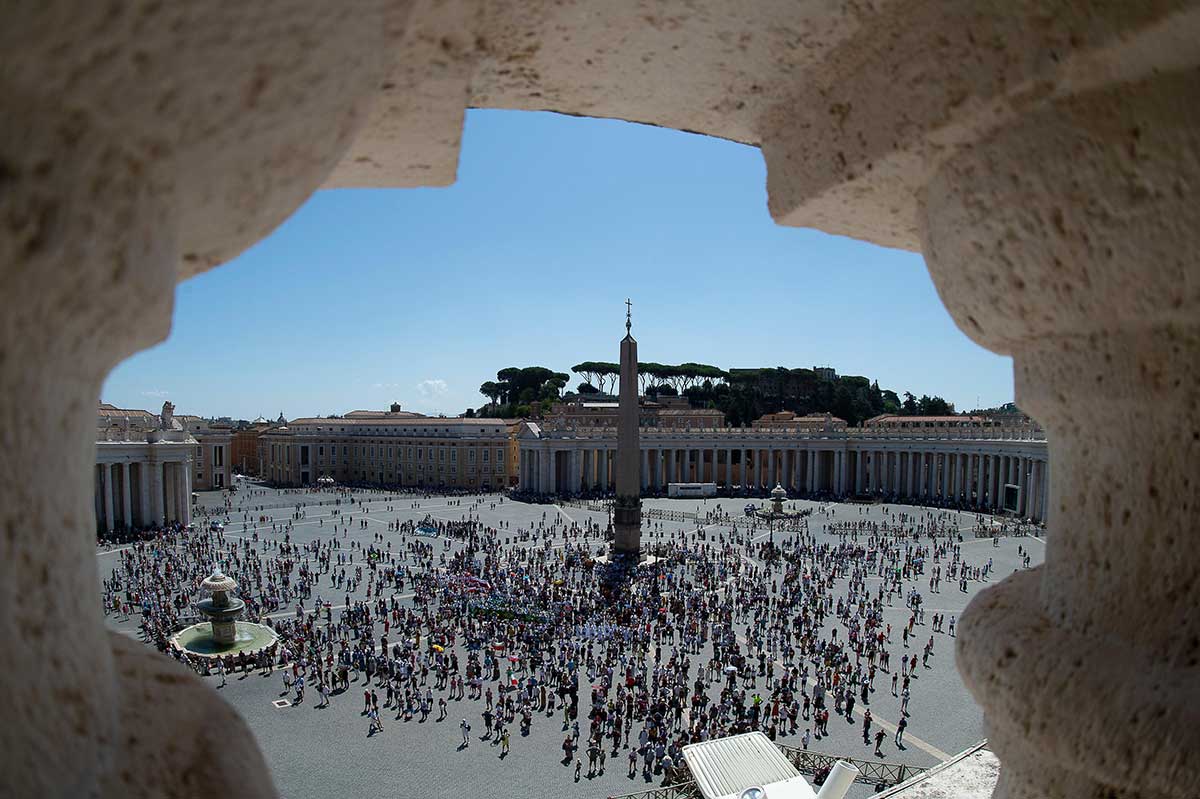 The crowd in St. Peter’s Square attends Pope Francis’ recitation of the Angelus at the Vatican Aug. 16, 2020. The pope appealed for prayers for those who have lost their jobs because of the COVID-19 pandemic. (CNS photo/Vatican Media)

By Cindy Wooden –  Even while enjoying a summer break, people should not forget those who are suffering because of the COVID-19 pandemic, Pope Francis said after reciting the Angelus prayer with visitors in St. Peter’s Square.

The pope’s call for prayers for those who have lost their jobs because of the pandemic was just one of several public appeals the pope made.

Marking the feast of the Assumption of Mary, the pope also prayed with pilgrims gathered at midday in a sweltering St. Peter’s Square.

Referring to Mary under the title “Mother of Hope,” he encouraged people to “invoke her intercession for all the situations in the world that are most in need of hope: hope for peace, for justice, hope for a dignified life.”

The pope drew attention to the people of northern Nigeria suffering because of “violence and terrorist attacks” both by suspected members of Boko Haram and other fundamentalist groups and by gangs of “bandits” who are terrorising villages and farms, stealing cattle and murdering people.

Pope Francis also said he is “following with particular attention the situation of the difficult negotiations regarding the Nile between Egypt, Ethiopia and Sudan. I invite all parties to continue on the path of dialogue so that the ‘Eternal River’ might continue to be a source of life that unites, not divides, that always nourishes friendship, prosperity, fraternity and never enmity, misunderstanding or conflict.”

The day after Pope Francis made his appeal, the three countries announced they would resume negotiations Aug. 18 over the Grand Ethiopian Renaissance Dam, which Ethiopia began building in 2011 as a source of hydroelectric energy. Egypt and Sudan are downriver and rely on the Nile’s flow for water and to power their own hydroelectric dams.

“Dear brothers and sisters of Egypt, Ethiopia and Sudan, let dialogue be your only choice, for the good of your dear populations and of the entire world,” the pope had said Aug. 15.

At the midday Angelus gathering the next day, Pope Francis said he was continuing to pray for Lebanon, still reeling from the massive explosion Aug. 4 at Beirut’s port, “and for other dramatic situations in the world that are causing people to suffer.”

“My thoughts also go to dear Belarus,” the pope said Aug. 16 in reference to the widely contested presidential election in the country one week earlier. “I am following attentively the post-electoral situation in that nation and I call for dialogue, the rejection of violence and the respect for justice and the law.”

As thousands continue to protest President Alexander Lukashenko’s claim to have won a sixth term, Pope Francis said, “I entrust all Belarusians to the protection of the Madonna, Queen of Peace.”