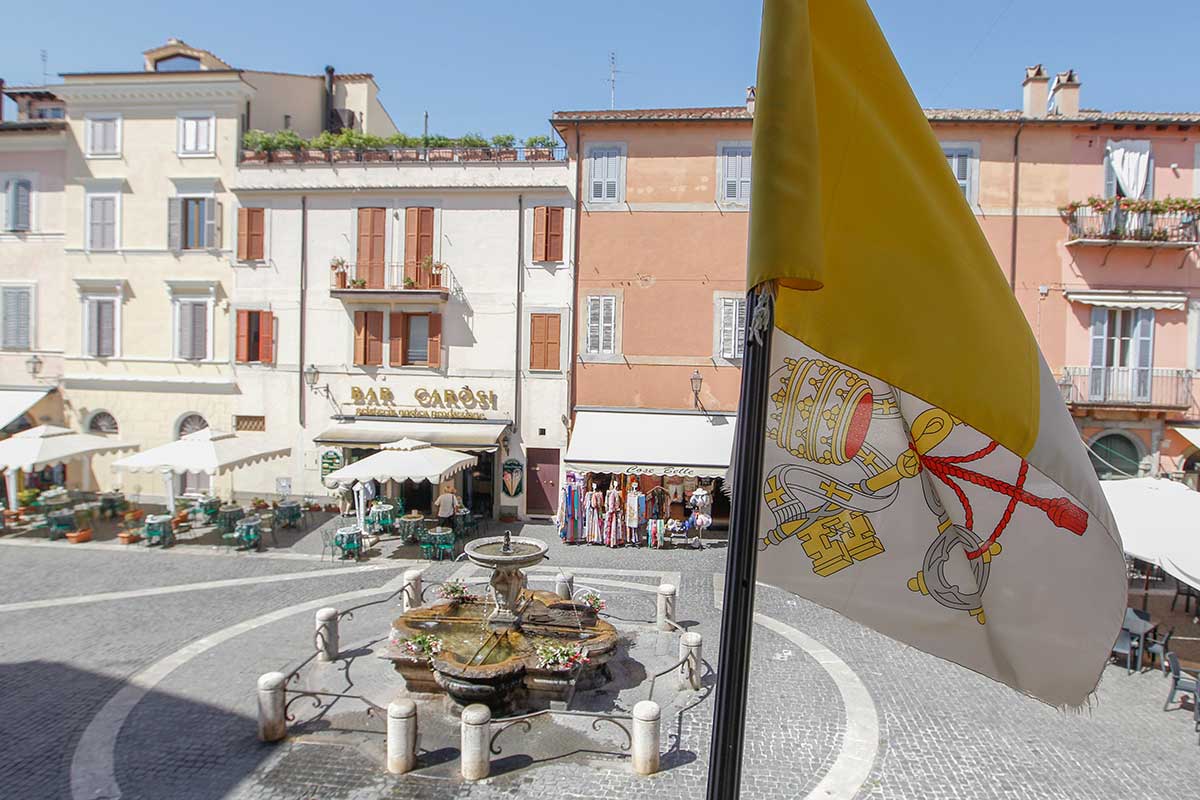 The Vatican flag flies over the main square in Castel Gandolfo, Italy, Aug. 14, 2020. This is the view from the office window of Salesian Father Enzo Policari, pastor of the town’s Church of St. Thomas. (CNS photo/Robert Duncan)

By Cindy Wooden –  Milvia Monachesi, who was elected mayor of Castel Gandolfo in 2012, said “for a moment” in 2013, “I thought I was the luckiest mayor in the world: I would have two popes.”

“But now there isn’t even one,” she said.

The town of close to 9,000 people is up in the hills about 24km southeast of Rome. It was the summer residence of popes from 1626 until the election of Pope Francis.

“When we understood that Pope Francis would not be coming, we felt orphaned and worried, because the entire life of the village revolved around the presence of the popes” in the summertime, the mayor said.

The highlight was always the feast of the Assumption of Mary when the pope would celebrate Mass for the whole town and thousands of visitors.

“We all have photos with the popes,” said the mayor, who was born in Castel Gandolfo during the pontificate of St. John XXIII and has lived there all her life.

“So, we felt orphaned in that way,” she said.

That first, mostly pope-less summer, residents – and the media – said the town overlooking Lake Albano would die economically without their special seasonal guest and the pilgrims he attracted.

“Not only did that not happen,” Monachesi said, “but perhaps it gave us the incentive to get back into the game,” expanding outreach and diversifying the economy to attract visitors and tourists for sports, the environment and the local food and wine scene.

“Then, the pope gave us this enormous gift – for which we must be very, very grateful – of opening” to tourists the gardens of the papal villas and the apostolic palace. Not only did tourists start coming back, but they came year-round rather than just from July through September.

Except for 2020 with its Covid-19 lockdown and travel restrictions, she said, the number of visitors to the gardens and the palace museum was growing each year. It reached 155,000 in 2019.

However, she said, “we continue to hope that the pope will decide to change his mind and come see us.”

Even though the apostolic palace, where the papal apartment is located, is run as a museum, it would not take much to make it a residence again, the mayor said. “If he wants, he can come anytime. He would not be lacking anything; the place has it all.”

Andrea di Bernardini, who runs the souvenir shop his grandfather opened facing the apostolic palace on the town’s main square, said the mayor is right about the increased diversity of tourists and the extension of the tourist season, but between Pope Francis’ election and the opening of the papal properties, there were two years of nothing and businesses are still suffering.

He has expanded his inventory from almost-exclusively religious souvenirs to include jewellery and general souvenirs but says he is still struggling.

Pope Francis’ decision to stay at the Vatican in the summer “was a great loss for Castel Gandolfo, especially economically; all the businesses have felt the absence of the pope,” he said. And the coronavirus made everything worse.

At one of the few shops in the city still focused exclusively on religious articles, the clerk did not want to speak to a reporter. All she would say was, “I want this year to end.”

Standing in the main square, Salesian Father Enzo Policari, pastor of St Thomas parish, said the town was completely still and silent during the Covid-19 lockdown. But now, the square comes alive each evening as people from town and from Rome seek a mini-outing and a nice meal.

Businesses are not suffering “too much” from the pope’s absence, the priest said, because the tourists who come to visit the palace and the gardens come every day, all year, and spend time in the town. Previously, the town was “bursting” on summer Sundays from 10 a.m. until just after the midday recitation of the Angelus with the pope, then everyone left.

The Salesian was named pastor of Castel Gandolfo in 2017, but he is no stranger to the town and its papal residents.

As a teenager in 1961, he said, he came to Castel Gandolfo and met St John XXIII in the same church where he is now pastor. “It was August 15, and passing by, the pope shook my hand. I remember being so impressed by that handshake with John XXIII – St John XXIII – that I went two days without washing my hands!”

Obviously, he said, the townspeople missing having a pope around. “It’s very beautiful that the people remember how much they benefited from the presence of the pope in this building,” he said, pointing to the nearby palace.

“The people are very attached to the popes,” he said. “They feel something is missing, especially the elderly.”

“If one day he should come back,” Father Policari said, “he will always have a home and citizens who will welcome him.”