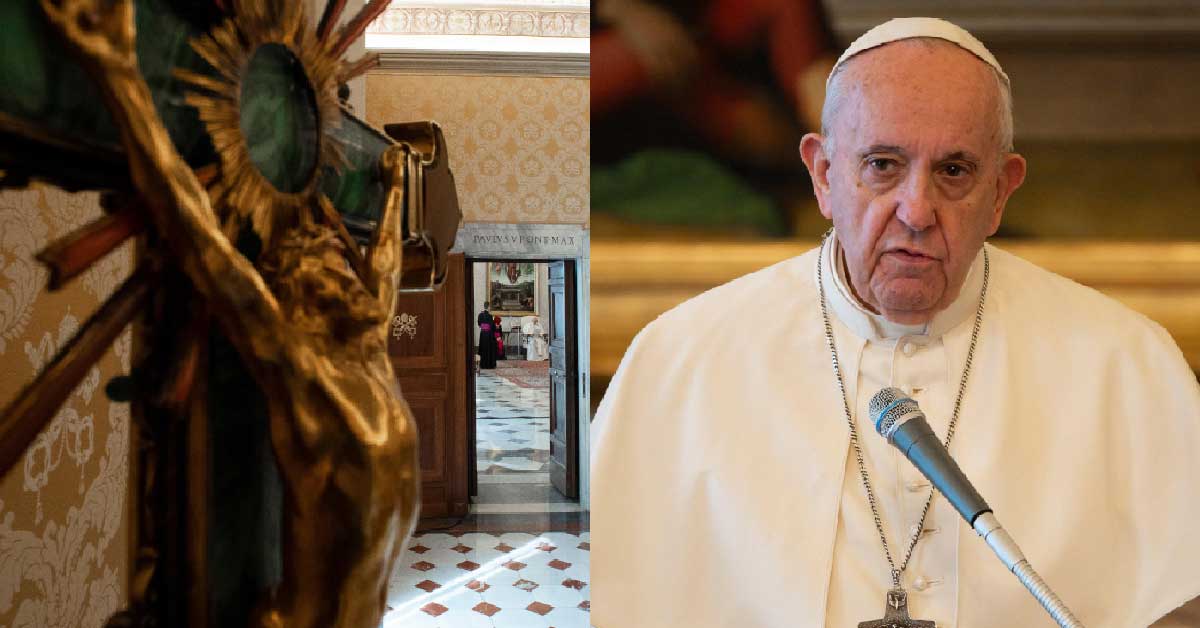 Pope Francis leads his general audience in the library of the Apostolic Palace at the Vatican. The pope said that the church’s preferential option for the poor includes making sure any vaccine developed for COVID-19 helps everyone. (CNS photo/Vatican Media)

By Carol Glatz – Church teaching on giving priority to the well-being of the poor and marginalised is not a political or ideological choice; it lies at the very heart of the Gospel, Pope Francis said.

The preferential option for the poor, which includes feeding the hungry and drawing close to the excluded, “is the key criterion of Christian authenticity,” he said during his weekly general audience.

The principle also would include making sure that any vaccine developed for the novel coronavirus helps everyone, he added.

“It would be sad,” he said, if priority for a vaccine “were to be given to the richest. It would be sad if this vaccine were to become the property of this nation or another, rather than universal and for all.”

During his audience, livestreamed from the library of the Apostolic Palace, Pope Francis continued a series of talks on the principles of the church’s social doctrine as a guide for healing and building a better future, particularly as the world is struggling with a pandemic and its negative effects.

A Proper Response to the Pandemic

In fact, he said, a proper response to the pandemic is twofold:

“On the one hand, it is essential to find a cure for this small but terrible virus, which has brought the whole world to its knees. On the other, we must also cure a larger virus, that of social injustice, inequality of opportunity, marginalisation and the lack of protection for the weakest.”

“It would be a scandal if all of the economic assistance we are observing – most of it with public money – were to focus on rescuing those industries that do not contribute to the inclusion of the excluded, the promotion of the least, the common good or the care of creation,” the pope said.

These are the four criteria that should be used “for choosing which industries should be helped: those which contribute to the inclusion of the excluded, to the promotion of the least, to the common good and the care of creation.”

Pope Francis said the Covid-19 pandemic “has exposed the plight of the poor and the great inequality that reigns in the world” and it has made those inequalities and discrimination even worse.

One of the responses that must not be missing is the preferential option for the poor, he said.

This key element of the church’s social teaching “is not a political option, nor is it an ideological option,” he said; it is “at the centre of the Gospel.”

Jesus “stood among the sick, the poor, the excluded, showing them God’s merciful love,” he said.

Heal the small invisible viruses too

The preferential option for the poor is a duty for all Christians and communities, he said, and it means doing more than providing needed assistance; it requires remedying the root causes and problems that lead to the need for aid.

“Many people want to return to normality” and get back to business, the pope said, but this “normality” must not entail ongoing social injustice and the degradation of the environment.

The world needs an economy and remedies that do not “poison society, such as profits not linked to the creation of dignified jobs,” but rather profits that benefit the general public.

“We must act now to heal the epidemics caused by small, invisible viruses and to heal those caused by the great and visible social injustices,” he said.

By “starting from the love of God, placing the peripheries at the centre and the last in first place,” he said, “a healthier world will be possible.”

Recovering from the pandemic will require action rooted in tangible love, “anchored in hope and founded in faith,” he said, “otherwise, we will come out of the crisis worse.”

The pope concluded by praying, “May the Lord help us and give us the strength to come out of it better, responding to the needs of today’s world.”