Pope: Pandemic Has Revealed How Often Human Dignity Is Ignored 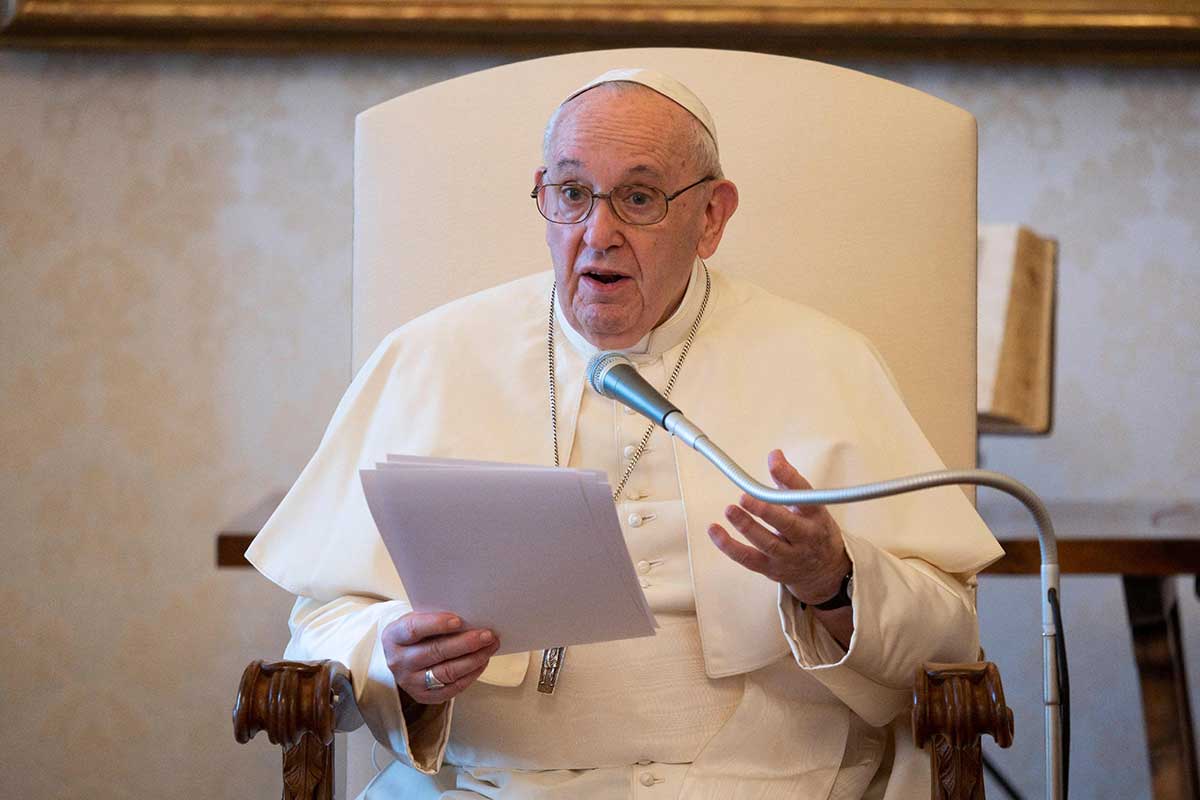 Pope Francis leads his general audience in the Apostolic Palace at the Vatican Aug. 12, 2020. The pope said the coronavirus pandemic has shed light on other “more widespread social diseases.” (CNS photo/Vatican Media)

By Cindy Wooden –  The coronavirus pandemic has shed light on other, “more widespread social diseases,” particularly attacks on the God-given human dignity of every person, Pope Francis said.

“The pandemic has highlighted how vulnerable and interconnected we all are. If we do not take care of each other, starting with the least – those who are most affected, including creation – we cannot heal the world,” the pope said at his weekly general audience.

Pope Francis had announced a week earlier that he would begin a series of audience talks about Catholic social teaching, especially in light of the Covid-19 pandemic.

The audience, which was livestreamed from the library of the Apostolic Palace, began with a reading from the Book of Genesis: “God created mankind in his image; in the image of God he created them; male and female he created them.”

The dignity of the human person, the pope said, is the foundation of Catholic social teaching and all its attempts to apply Gospel values to the way people live and act in the world.

Pope Francis said that while there are many “heroes” who are caring for others during the pandemic, even at the risk of their own lives, the pandemic also has revealed economic and social systems influenced by a “distorted vision of the person, a gaze that ignores the person’s dignity and relational character” by seeing others as “objects, objects to be used and discarded.”

Such an attitude is contrary to the faith, he said. The Bible clearly teaches that God created every person with “a unique dignity, inviting us into communion with him, with our sisters and brothers (and) with respect for all creation.”

“As disciples of Jesus,” he said, “we do not want to be indifferent or individualistic – two ugly attitudes, which are against harmony. Indifferent, I look the other way. And individualistic, ‘only for me,’ looking only at one’s own interests.”

Instead, God created human beings “to be in communion,” the pope said. “We want to recognise the human dignity of every person, whatever his or her race, language or condition.”

Taking seriously the dignity of each person and recognising the God-given gift of creation should give rise to both a sense of responsibility and a sense of awe, Pope Francis said.

But it also has “serious social, economic and political implications” for those who recognise that responsibility, he said.

Pope Francis urged people to continue working to contain the virus and find a cure, but said that in the meantime, “faith exhorts us to commit ourselves seriously and actively to combating indifference in the face of violations of human dignity.”

A “culture of indifference,” he said, “accompanies the throwaway culture: things that do not affect me, do not interest me,” and Catholics must counter such attitudes.

“In modern culture, the closest reference to the principle of the inalienable dignity of the person is the Universal Declaration of Human Rights,” the pope said.

After the audience, Pope Francis held a private meeting with Michelle Bachelet, the U.N. High Commissioner for Human Rights.