Pope: We Cannot Stand By and Watch 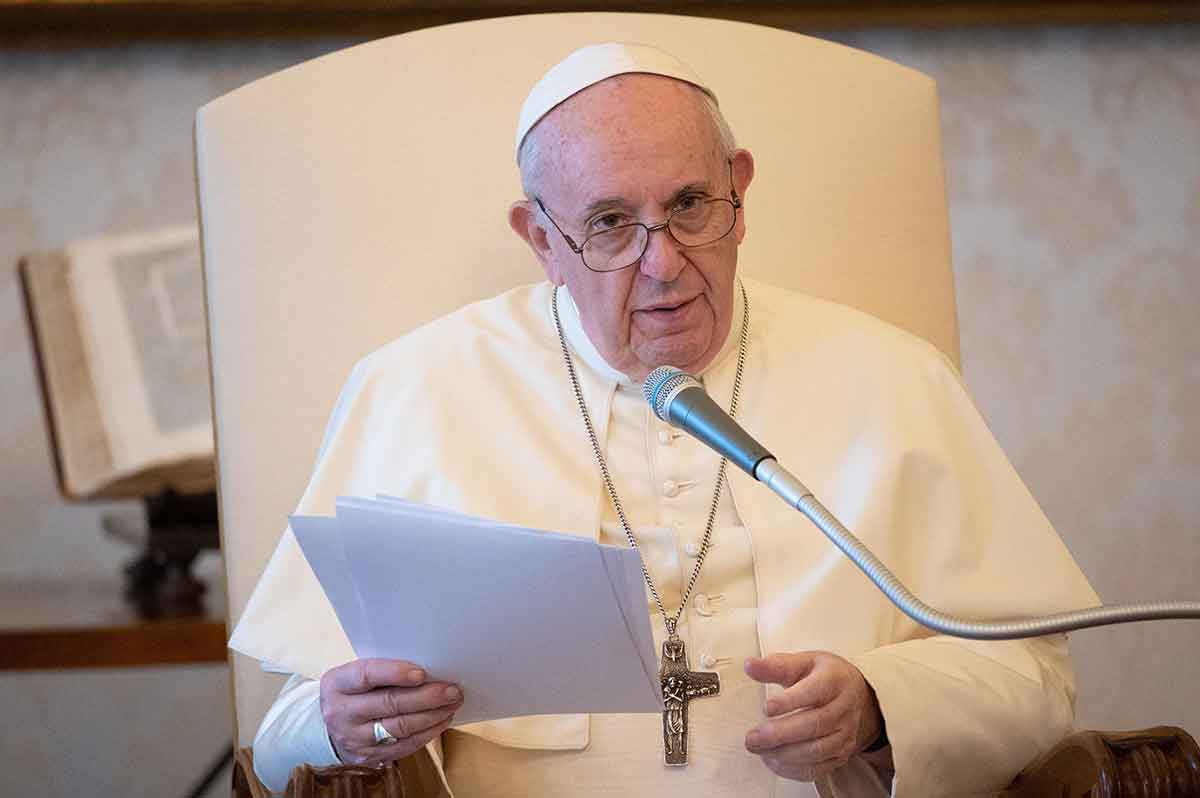 Pope Francis leads his general audience in the library of the Apostolic Palace at the Vatican Aug. 26, 2020. Christians cannot stand idly by and watch as milions of people are deprived of their basic needs because of greed, the pope said. (CNS photo/Vatican Media)

By Carol Glatz –  Christians cannot stand idly by and watch as millions of people are deprived of their basic needs because of others’ greed, Pope Francis said.

“When the obsession to possess and dominate excludes millions of people from having primary goods, when economic and technological inequality are such that the social fabric is torn and when dependence on unlimited material progress threatens our common home, then we cannot stand by and watch,” he said Aug. 26 during his weekly general audience.

Christians must act together, rooted in God and united in the hope of “generating something different and better” that is more just and equitable, he said.

During a livestream from the library of the Apostolic Palace, Pope Francis continued a series of talks on the principles of the church’s social doctrine as a guide for healing and building a better future.

Focusing on the universal destination of goods, the pope said this is “the first principle of the whole ethical and social order.”

God entrusted the earth and its resources “to the common stewardship of mankind to take care of them,” he said, citing the Catechism of the Catholic Church (2402).

When God called on his children to “have dominion” over the earth in his name, the pope said, this was not to be interpreted as “a ‘carte blanche’ to do whatever you want with the earth.”

“No,” he said. “There exists a relationship of mutual responsibility between us and nature.”

Communities must protect the earth, take only what they need for subsistence and make sure the fruits of the earth reach everyone, not just a few people, the pope said.

Our Relationship with Our Property

A person should see his or her legitimate possessions “not only as his own but also as common in the sense that they should be able to benefit not only him but also others,” according to the Second Vatican Council’s Pastoral Constitution on the Church in the Modern World (“Gaudium et Spes”).

In fact, the catechism says ownership of any property makes the “holder a steward of providence, with the task of making it fruitful and communicating its benefits to others,” he said.

“We are stewards of goods, not masters” or lords keeping them “selfishly for yourself,” he added.

The pope said the catechism also says, “political authority has the right and duty to regulate the legitimate exercise of the right to ownership for the sake of the common good.”

This “subordination of private property to the universal destination of goods,” he said, “is a golden rule of social conduct and the first principle of the whole ethical and social order.”

Property and money are meant to be instruments that serve development, he said.

However, people easily turn property and money into ends in themselves, he added.

When that happens, he said, the human being, who was made in the image and likeness of God, “becomes deformed” and becomes individualistic, calculating and dominating, instead of social, creative, cooperative and charitable “with an immense capacity to love.”

Social inequality and environmental degradation go hand in hand, he said, and have the same root cause: “the sin of wanting to possess and dominate one’s brothers and sisters, nature and God himself,” which was not God’s plan for creation.

The inequalities in the world “reveal a social illness; it is a virus that comes from a sick economy,” which is the result of unfair economic growth that disregards fundamental human values and leaves just a handful of people with more wealth than the rest of the world, he said.

“If we take care of the goods that the creator gives us, if we put what we possess in common in such a way that no one would be lacking, then we would truly inspire hope to regenerate a more healthy and equal world,” he said.