Rosary Army’s Mission Is To ‘Make Them, Pray Them And Give Them Away’ 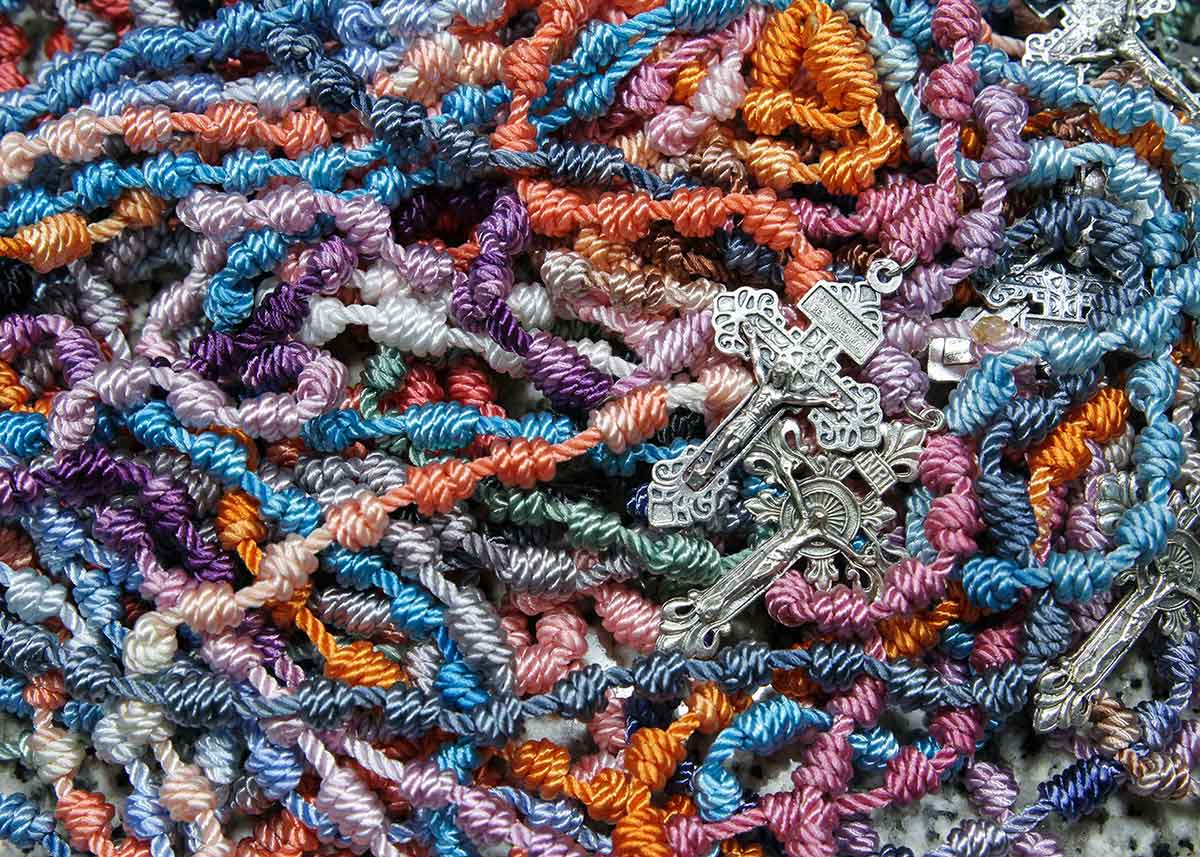 By Erika Anderson Redding –  Jennifer and Greg Willits were busy celebrating an anniversary – marking nearly 20 years of their ministry, and 15 years of their podcast.

And then the world changed.

It was 17 years ago when Greg and Jennifer first founded Rosary Army, not long after Greg made his first all-twine, knotted rosary. A modest ministry at first, the buzz quickly grew of the apostolate with the mission to “Make them, pray them and give them away.” Visitors to RosaryArmy.com flocked to the website to request rosaries and learn how to make them.

Greg made his first rosary after going to confession and seeing a priest with a knotted rosary. Intrigued, he went in search of how to make his own. His pursuit for detailed instructions ended without much luck.

“I ended up cobbling together with macrame cord the ugliest rosary ever seen by man,” he said. “It’s hard for me to put into words what it did to me, seeing that rosary come into formation in my own hands, and seeing a finished rosary in my hands. Realising that here’s this thing that I grew up seeing as a magic talisman … seeing this knotted rosary from my own fingers, that was really kind of cool.”

Greg was hooked. He started making rosaries regularly and giving them away to family and friends. He said, at first, there was a strong temptation to focus on himself and what he had made.

“That’s why the idea of Rosary Army is so beautiful. I started to have this realisation, after Pope John Paul II declared the Year of the Rosary and added the luminous mysteries, that it’s not about me, and that I’m not alone. I’m in an army and there are other people around the world that are propagating the rosary,” he told The Georgia Bulletin, newspaper of the Archdiocese of Atlanta.

“But this was a unique take on that. It wasn’t just about huge buckets of mission rosaries going to third-world countries, this was affecting people one at a time – one on one,” Greg continued. “You can give a rosary to someone. It impacts them because they just received a very personal gift from your hands. And then when they make one and experience the joy of giving one away themselves, there’s sort of an ‘aha’ moment that happens.

“It takes you out of your individual prayer, out of your parish, and makes you feel like you’re a part of the universal church.”

Greg realised he was being called to do more with his newfound prayerful craft, so he created the Rosary Army website. When people requested a rosary through the site, the Willitses also sent a scrap piece of twine, along with instructions for how to make them.

Jennifer recalls watching her husband become a “man driven,” but at first thought his rosary making was just a hobby.

“I begin to see that this was not something that was going to go away. It was growing into something,” she said. “I am a person who is administrative by nature. I was identifying that this is something that needs to be organised and formed into a nonprofit.”

“It has been nothing short of miraculous. It has been constant loaves and fishes for 17 years. The amount of rosaries that we’ve had – we’ve never run out,” Greg said. “We’ve always had just what we needed to cover our expenses. And while we would like to grow more and grow faster, again, that’s not our call. God has made it grow every time it was supposed to grow.”

Jennifer believes strongly that they have had a guiding hand all along.

“Unbeknownst to Greg and me, we were becoming guardians of Mary’s army that we were trying to build. She knew she needed guardians on earth to manage it and I think that’s who we are and what we have been humbled to be able to do for her,” Jennifer said.

Fifteen years ago, the Willitses began their successful podcast, which continues today. They moved from Conyers, Georgia, to Colorado, then to Indiana and, most recently, back to Georgia. Their ministry has included a video Web series, speaking engagements and even a stint on The Catholic Channel on Sirius XM.

Listeners can still access their podcast through the Sirius XM app. But at its core, Rosary Army is a ministry to make, pray and give away rosaries.

Greg recently revamped the website, and already hundreds have requested rosaries, or downloaded instructions for praying or making their own. The most frequently visited page on their website is the audio rosary.

“We’ve had over 12 million downloads of the audio rosaries over the years, and with new prayers like the Divine Mercy chaplet and Angelus (on the site), every time I look at stats, there’s someone on the site currently praying the rosary with those audio files,” Greg said. “It just amazes us.”

But in March, as Greg was working on the website, things around the world were changing rapidly. As fear of COVID-19 began to take hold, the Willitses knew they had to do something. Through their YouTube channel, Greg and Jennifer started to pray the rosary live nightly.

“We felt a great urgency to encourage more people to be praying the rosary at that time and the initial response was overwhelming,” Greg said. “In fact, there were times when the numbers of people and the prayer intentions they were asking us to offer up in the rosary literally brought us to tears in the middle of a rosary.”

Since Rosary Army began in 2003, Greg and Jennifer estimate that the ministry has allowed for the distribution of more than a million rosaries, either directly from the website, or by the people who have learned to make them and give them away.

The Willitses hope that Rosary Army will be sustained for generations to come.

“Right now, we need lots of prayers,” Greg said. “Though this ministry has been around for going on 18 years now, we’ve begun to realise the need to start planning on a long-term plan for Rosary Army to continue after we’re dead and gone. The fact that we haven’t been able to run it into the ground tells us Jesus and Mary want this to keep going.”