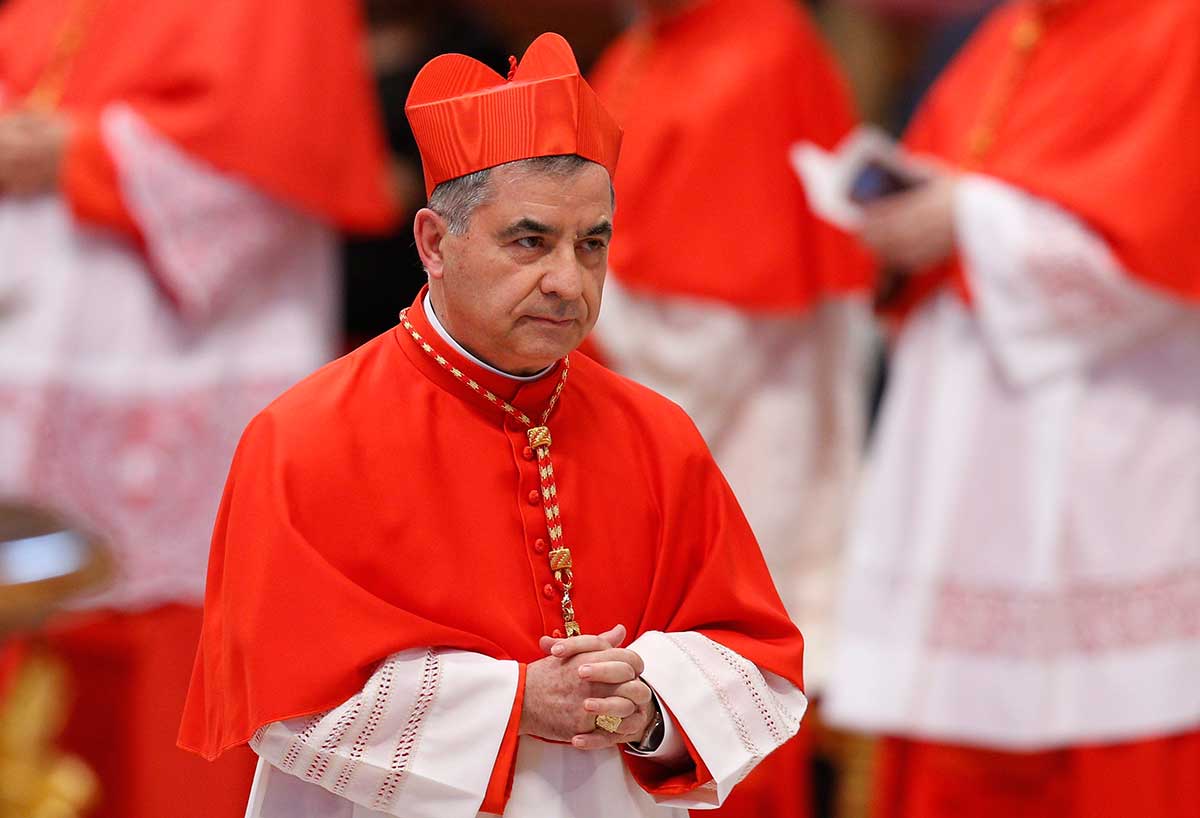 The Vatican announced Sept. 24, 2020, that Pope Francis accepted Cardinal Angelo Becciu’s resignation as prefect of the Congregation for Saints’ Causes and his renunciation of the rights associated with being a cardinal. Cardinal Becciu is pictured in a file photo. (CNS photo/Paul Haring)

By Cindy Wooden – Pope Francis has accepted Cardinal Angelo Becciu’s resignation as prefect of the Congregation for Saints’ Causes and his renunciation of the rights associated with being a cardinal, the Vatican announced on September 24.

The cardinal, 72, will remain a priest and retired bishop, but will no longer exercise the role of a cardinal, including by serving as a papal adviser, a member of Vatican congregations and councils, and as an elector of a new pope.

The Vatican announcement did not give a reason for the cardinal’s resignation but referred questions to Cardinal Becciu; he did not respond immediately to an emailed request.

The last cardinal to renounce the rights and privileges of being a cardinal was Scotland’s Cardinal Keith O’Brien, former archbishop of St. Andrews and Edinburgh, who did so in 2015; he had resigned as archbishop two years earlier after admitting to sexual misconduct. He did not participate in the 2013 conclave that elected Pope Francis, and he died in 2018.

Theodore E. McCarrick, the former archbishop of Washington, resigned from the College of Cardinals in July 2018; he did not just renounce the rights and duties of a cardinal.

Before Pope Francis named him a cardinal in 2018 and appointed him to head the Congregation for Saints’ Causes, Cardinal Becciu had served for seven years as “sostituto,” the No. 3 position in the Vatican Secretariat of State.

It was in that position that he was involved in the Vatican purchase of a property in London’s posh Chelsea district, a deal that racked up huge debts for the Vatican and has been the subject of several lawsuits.

Born June 2, 1948, he had entered the regional seminary of Sardinia in Cuglieri and moved with the seminary to Cagliari. He was ordained to the priesthood Aug. 27, 1972, and incardinated in the Sardinian Diocese of Ozieri.

After ordination, he spent eight years ministering in the diocese, including a period as vice rector of the Ozieri seminary. Invited to join the Pontifical Ecclesiastical Academy, the school for Vatican diplomats, he earned a degree in canon law in Rome and entered the Vatican diplomatic service in 1984, serving at Vatican embassies and offices in the Central African Republic, Sudan, New Zealand, Liberia, Great Britain, France and, finally, the United States.

In 2001, St. John Paul II named him an archbishop and apostolic nuncio to Angola and to Sao Tome and Principe.

In 2009, Pope Benedict XVI  named him nuncio to Cuba, a position he held until 2011, when the pope asked then-Archbishop Becciu to move to the Vatican Secretariat of State.