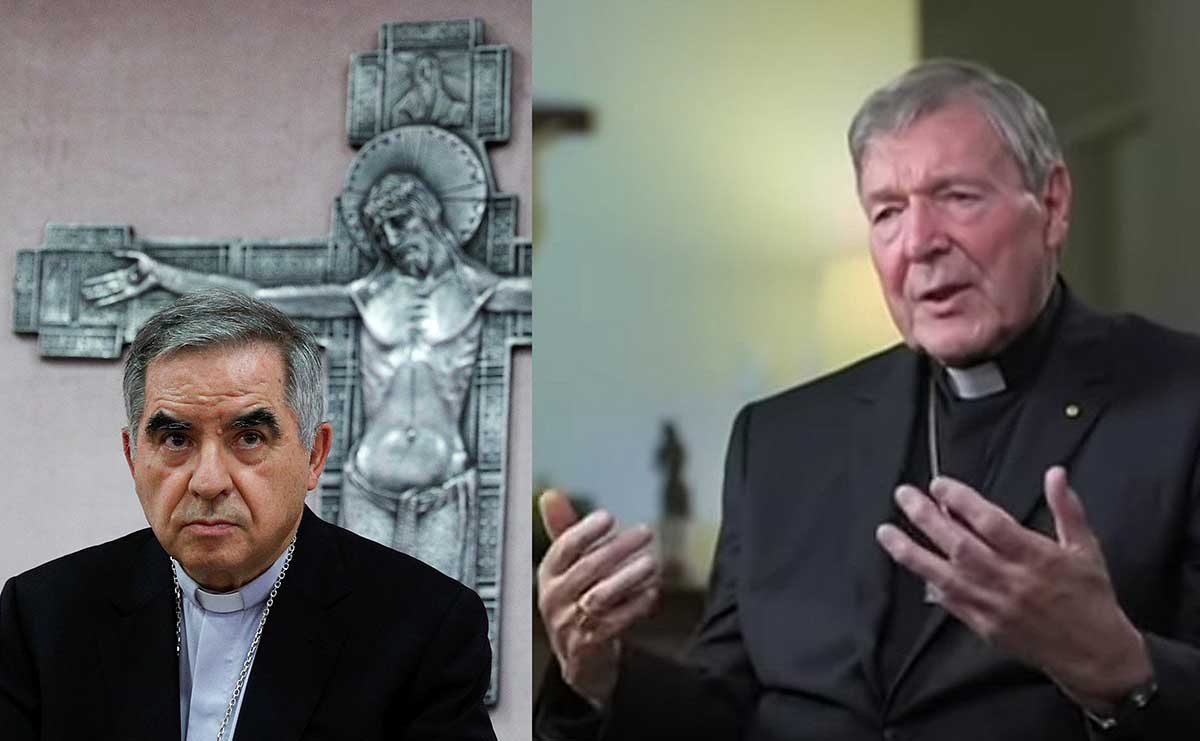 Cardinal Angelo Becciu and retired Cardinal George Pell are seen in this composite photo. Cardinal Pell issued a statement thanking Pope Francis for cleaning up Vatican finances; Cardinal Becciu told reporters on September 25, 2020, that he and Cardinal Pell have had a history of disagreements over finances. (CNS composite/photos by Guglielmo Mangiapane, Reuters; CNS)

By Junno Arocho Esteves –  The sudden resignation of Cardinal Angelo Becciu as prefect of the Congregation for Saints’ Causes due to alleged embezzlement was viewed as a vindication of previous attempts to clean house by Australian Cardinal George Pell, former prefect of the Vatican Secretariat for the Economy.

“The Holy Father was elected to clean up Vatican finances. He plays a long game and is to be thanked and congratulated on recent developments,” Cardinal Pell said in a statement released on September 25.

Cardinal Pell’s statement drew renewed attention to a rift between the prelates after an audit of the Vatican’s financial records ordered by the Australian cardinal in 2016 was suspended by Cardinal Becciu.

Cardinal Becciu was informed by the pope on September 24 of an investigation for allegedly embezzling an estimated 100,000 euros ($116,361) of Vatican funds and redirecting them to Spes, a Caritas organisation run by his brother, Tonino Becciu, in his home Diocese of Ozieri, Sardinia.

Pope Francis “told me that he no longer has trust in me because a report came from the magistrates that I allegedly committed acts of embezzlement,” Cardinal Becciu told reporters.

At the time, then-Archbishop Becciu served as “sostituto,” the No. 3 position in the Vatican Secretariat of State.

At a press briefing with journalists, Cardinal Becciu responded to Cardinal Pell’s statement, saying that between the two there were “professional differences because I saw things one way, and he saw them another way.”

“The fundamental point is that he had wanted to apply laws that hadn’t been promulgated yet” when he was prefect for the economy, Cardinal Becciu said. The Secretariat of State, he added, had “an obligation to observe the laws that are in force.”

Nevertheless, he continued, his relationship with Cardinal Pell remained cordial until an argument erupted during a meeting of Vatican officials with Pope Francis.

During the meeting, Cardinal Becciu recalled, “we spoke about matters dealing with the Secretariat of State.”

“I tried to explain my ideas and he (Cardinal Pell) silenced me, saying, ‘You are a dishonest person.’ And it was there I lost my patience. I couldn’t allow him to say something like that because from the time I was a child, I had always been taught by my parents to be honest, and the worst thing to be accused of is being a dishonest person.”

“At the end of the meeting, the pope told me, ‘You did well,'” Cardinal Becciu said.

In mid-2017, Cardinal Pell took leave from his position as prefect of the secretariat, which was investigating corruption in Vatican finances, so he could return to Australia to face charges of sexual abuse. His term as head of the secretariat expired in 2019.

Cardinal Becciu told journalists that notwithstanding their differences, he had sent a personal message to Cardinal Pell when he was facing prosecution in Australia.

“These are the exact words, ‘Your Eminence, despite the professional differences we have had, I suffer because of these accusations, and as a priest, I hope that your innocence will be completely proven. I greet you and I embrace you,'” Cardinal Becciu recalled.

“If Pell is still convinced that I am dishonest,” the cardinal added, “then there is nothing I can do.”

In April, Cardinal Pell’s conviction was overturned by the High Court of Australia.

What’s in a Name: Vatican Questions Use of Term ‘Viri Probati’