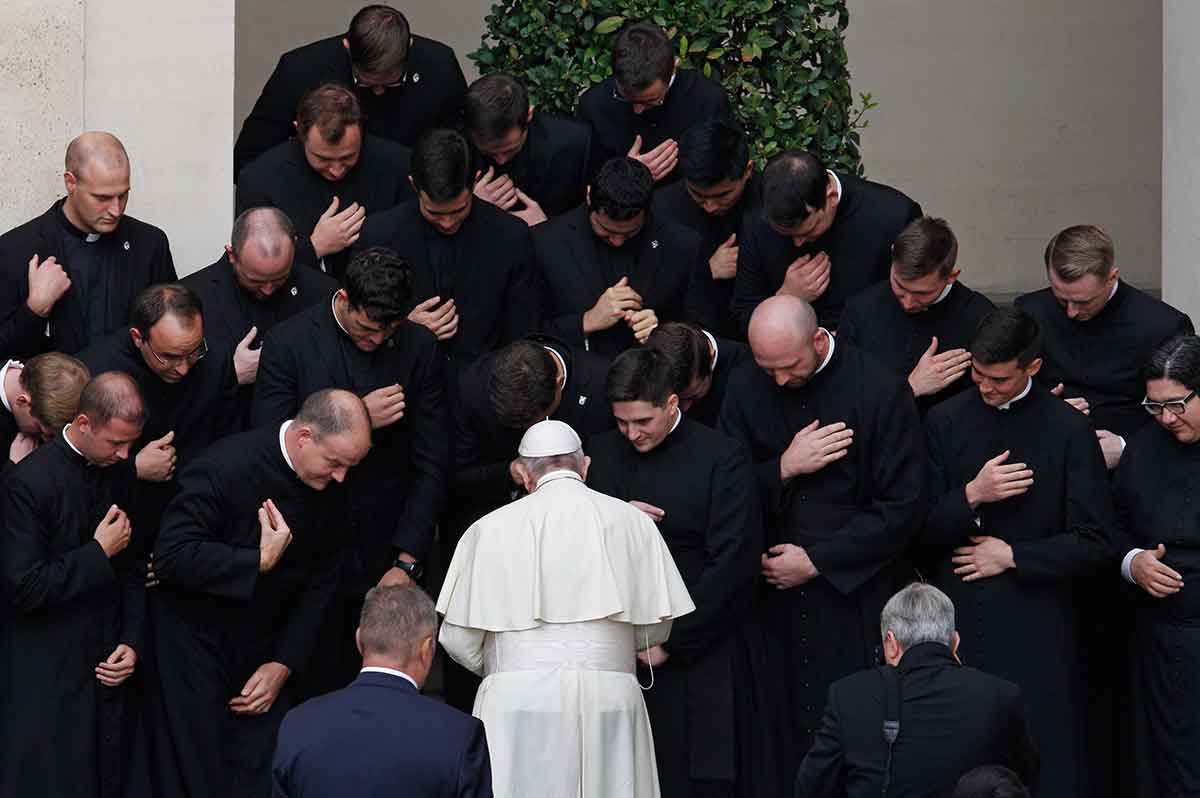 Pope Francis blesses priests and seminarians from the Pontifical North American College during his general audience in the San Damaso courtyard at the Vatican Sept. 30, 2020. (CNS photo/Paul Haring)

By Junno Arocho Esteves – In the aftermath of the coronavirus pandemic, the world must aspire to be better and not return to its previous “sickened” normality of injustice, inequality and environmental degradation, Pope Francis said.

“The normality we are called to is that of the kingdom of God, where ‘the blind receive sight, the lame walk, those who have leprosy are cleansed, the deaf hear, the dead are raised, and the good news is proclaimed to the poor,'” the pope said September 30 during his weekly general audience.

And it is a situation where “no one acts the fool by looking the other way. This is what we must do to change,” he said at the audience, which was held in the San Damaso courtyard of the Apostolic Palace.

Continuing his series of talks on “healing the world,” the pope said Christ came to heal both the physical and “social” ailments that plague the world and gave the “necessary gifts to love and heal as he did, in order to take care of everyone without distinction of race, language or nation.”

Applying those gifts today, he added, will “renew society and not return it to the so-called ‘normality,’ which is a sickened normality.”

“In the normality of the kingdom of God,” the pope said, “bread comes to everyone and there is enough; social organisation is based on contributing, sharing and distributing, not in possessing, excluding and accumulating.”

The Covid-19 pandemic, the pope continued, exposed the world’s “physical, social and spiritual vulnerabilities” and “laid bare the great inequality that reigns in the world: the inequality of opportunity, of goods, of access to health care, technology, education.”

There are “millions, millions of children who cannot go to school today and the list goes on,” he said. “These injustices are not natural nor inevitable. They are the work of humankind, they come from a model of growth detached from the deepest values.”

The pope denounced today’s “great human and socio-economic viruses,” including “trickle-down” economics, the theory that tax-breaks and other government programs helping the wealthy eventually will benefit the rest of the population.

“We certainly cannot expect that the economic model that is the basis of an unfair and unsustainable development will solve our problems. It did not and it will not, even if some false prophets continue to promise ‘the trickle-down effect,’ which never comes,” he said.

Departing from his prepared remarks, the pope said the theory holds that when the “glass” held by the wealthy is full, it will overflow, spreading economic benefits to everyone. But, he said, in reality “the glass begins to fill up and when it is almost full, the glass grows and grows and grows and never trickles down. Never! Be careful,” the pope warned.

Pope Francis called on all men and women to build a society founded on solidarity where “the last are taken into consideration like the first are.”

“A society where diversity is respected is much more resistant to any type of virus,” the pope said.