Pope: Cross Is a Sign Of God’s Love, Not a Superstitious Ornament 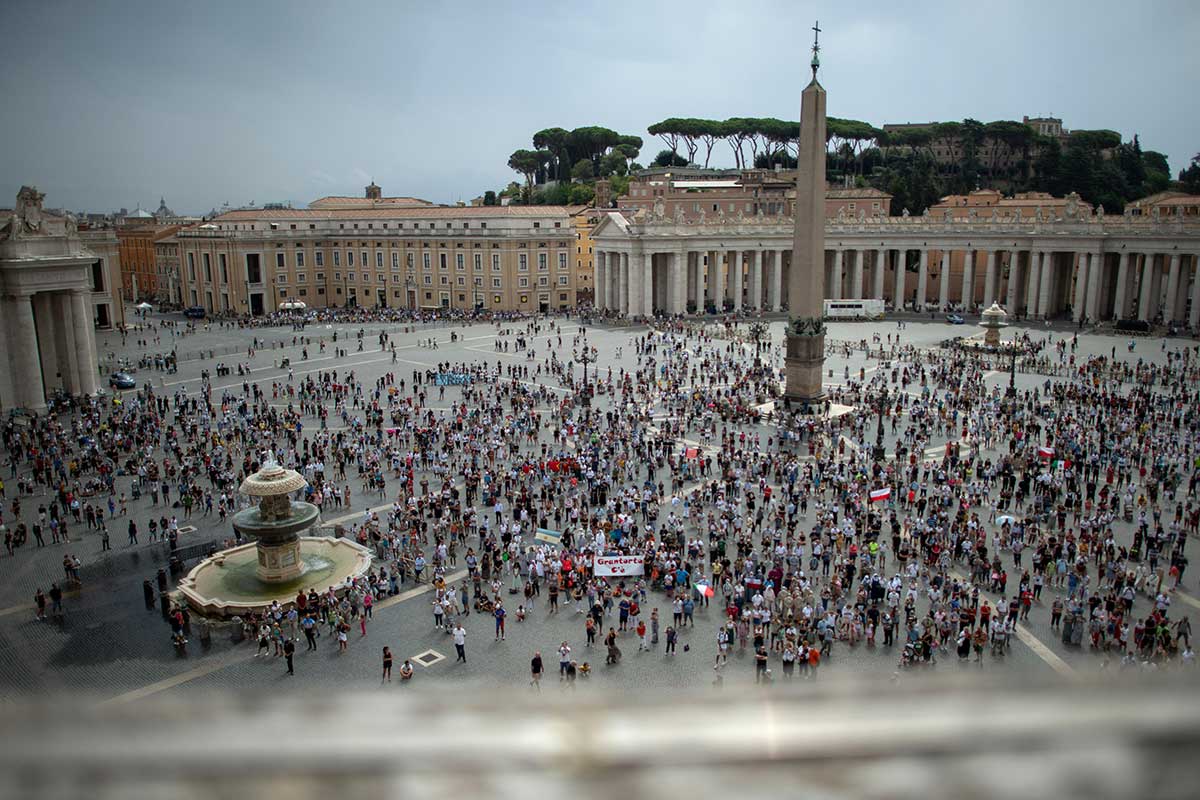 People in St. Peter’s Square attend the Angelus led by Pope Francis from the window of his studio at the Vatican Aug. 30, 2020. (CNS photo/Vatican Media)

By Junno Arocho Esteves –  Christ’s cross is a powerful symbol of God’s love for humanity and not just a decoration or trinket, Pope Francis said.

While Christians often hang a crucifix on the wall or wear one around their necks, it should be used as a sign “of our desire to be united with Christ” and not “reduced to a superstitious object or an ornamental necklace,” the pope said during his Sunday Angelus address.

“Each time we fix our gaze on the image of Christ crucified, let us contemplate that he, as the true servant of the Lord, has accomplished his mission, giving life, spilling his blood for the forgiveness of sins,” the pope said.

Before concluding his address, the pope made an appeal for peace in “the Eastern Mediterranean area which is under threat from various outbreaks of instability.”

According to Bloomberg News, tensions between Greece and Turkey over contested territorial waters and energy resources in the Mediterranean Sea continued to escalate.

The recent stationing of Greek troops on the island of Kastellorizo was seen as a provocation by the Turkish government, which demanded their immediate withdrawal.

“I appeal, please, for constructive dialogue and respect for international law and order to resolve the conflicts that threaten the peace of the peoples of that region,” the pope said.

But before praying the Angelus prayer with pilgrims in St. Peter’s Square, the pope reflected on the day’s Gospel reading from St. Matthew, in which Jesus tells his disciples that he will be killed but will rise again on the third day.

Peter’s reaction – “God forbid, Lord! No such thing shall ever happen to you” – showed that “he has faith, he believes in Jesus, he believes – he wants to follow him, but does not accept that his glory will pass through the Passion,” the pope explained.

“For Peter and the other disciples – but for us as well – the cross is a stumbling block, a ‘hindrance,’ whereas Jesus considers the ‘hindrance’ escaping the cross, which would mean avoiding the Father’s will, the mission that the Father has entrusted to him for our salvation,” he said.

Pope Francis said that in calling his disciples to deny themselves and take up their cross, Jesus also calls on all Christians to experience “a reversal of mentality and of values” and to bear daily tribulations “with faith and responsibility.”