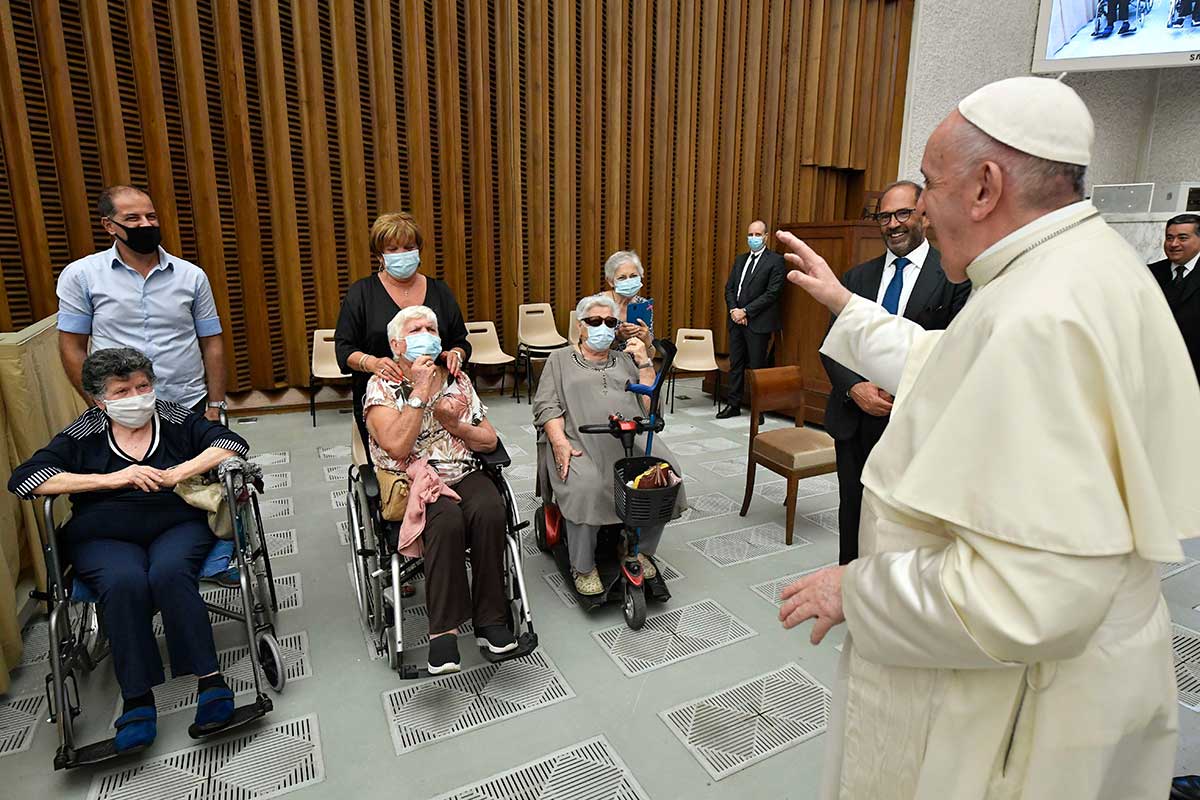 Pope Francis greets people in the Paul VI audience hall at the Vatican. The pope met with members of the International Gynaecologic Cancer Society, an organisation that promotes research and education “to enhance the care of women with gynecologic cancer worldwide.” (CNS photo/Vatican Media)

By Junno Arocho Esteves –  Pope Francis said that when it comes to treating patients, especially women, doctors and medical institutions should place their care above financial gain.

“Financial concerns should not be allowed to dominate the field of health care to the point where such essential aspects as building relationships with patients are overlooked,” the pope said during an audience at the Vatican with members of the International Gynaecologic Cancer Society.

“In this regard,” he said, “praise is due to the various nonprofit organisations that place patients at the centre, assisting with their needs, responding to their legitimate questions and enabling those who, due to the fragility of their personal, economic and social condition, cannot make their voices heard.”

Founded in 1985, the International Gynaecologic Cancer Society promotes research and education “to enhance the care of women with gynaecologic cancer worldwide,” according to its website. The group was in Rome for its annual global meeting.

Welcoming participants, the pope expressed his admiration for the society’s work “in caring for women suffering from complex and distressing diseases,” which shows “how important it is to forge bonds of solidarity and support between patients suffering from serious pathologies, their family members and medical personnel.”

“This becomes all the more important when it has to do with illnesses that can impair or eliminate fertility and the possibility of motherhood,” he said. “In those situations, which so greatly impact women’s lives, profound sensitivity and respect for the well-being of each patient – psychological, relational, spiritual – must constantly be shown.”

Every patient, he continued, “is defined by much more than his or her clinical data,” and doctors play a significant role in their recovery, both through their expertise and more importantly, their concern.

“It is often stated, and rightly so, that a good relationship with health care personnel is itself part of the cure,” the pope said. “What a great benefit it is for the sick to have an opportunity to open their hearts freely and speak to others about their condition and needs.”

Pope Francis encouraged the society’s members to make the results of their studies and research known. Although it may be difficult, it can help people “remember aspects of life that we sometimes forget, such as the precariousness of our existence, our need for one another, the vanity of self-centeredness, and the reality of death as part of life itself.”

“Sickness reminds us of the decisive attitude for every human being, namely, our need to entrust ourselves: to others, who are our brothers and sisters, and to ‘the Other,’ who is our heavenly Father,” he said. “It also reminds us of the importance of closeness, of our need to be neighbours to one another, as Jesus taught in the parable of the good Samaritan.”

As Lockdowns End, Pope Prays For Prudence In Behaviour