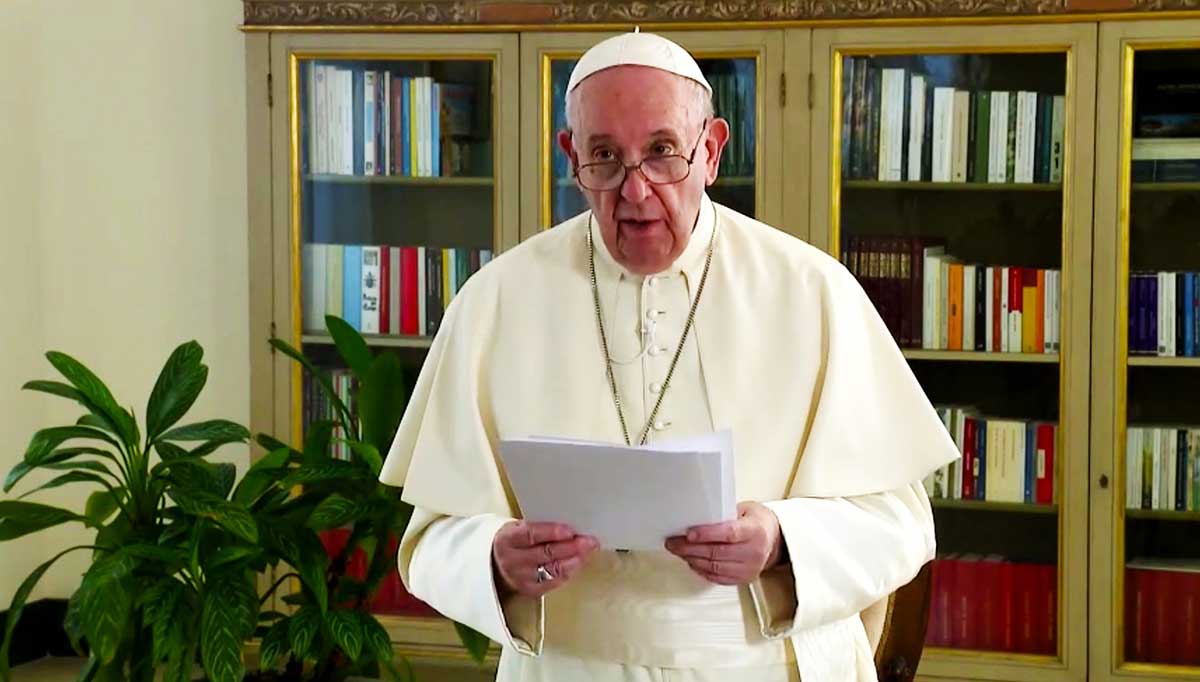 Pope Francis delivers a prerecorded address to the 75th session of the UN General Assembly; the recording from the Vatican’s Apostolic Palace was aired Sept. 25, 2020. (CNS screenshot/Chaz Muth)

By Cindy Wooden –  Pope Francis asked members of the United Nations how they think they can respond to the Covid-19 pandemic and build a more peaceful, more just world when many of their countries spend billions on military weapons and when their treatment of the unborn, of refugees and of women shows so little respect for human life.

“We must ask ourselves if the principal threats to peace and security – poverty, epidemics, terrorism and so many others – can be effectively countered when the arms race, including nuclear weapons, continues to squander precious resources that could better be used to benefit the integral development of peoples and protect the natural environment,” the pope said in his video address, which was broadcast Sept. 25.

On the fifth anniversary of his visit to the U.N. headquarters in New York, Pope Francis returned to themes he has repeated since the Covid-19 pandemic began: Humanity faces a choice between trying to go back to an often unjust “normal” or taking the opportunity to rethink economic and political policies, putting the good of all people and the environment ahead of concern for maintaining the lifestyles of wealthy individuals and nations.

He drew particular attention to the pandemic’s impact on children, “including unaccompanied young migrants and refugees,” as well as to reports that “violence against children, including the horrible scourge of child abuse and pornography, has also dramatically increased.”

With millions of children still out of school, he said, there is a risk of “an increase in child labour, exploitation, abuse and malnutrition.”

“Sad to say, some countries and international institutions are also promoting abortion as one of the so-called ‘essential services’ provided in the humanitarian response to the pandemic,” he said. “It is troubling to see how simple and convenient it has become for some to deny the existence of a human life as a solution to problems that can and must be solved for both the mother and her unborn child.”

Pope Francis insisted that addressing the pandemic and building a more just and equitable world involves looking at every aspect of national and international life.

The pandemic “can represent a concrete opportunity for conversion, for transformation, for rethinking our way of life and our economic and social systems, which are widening the gap between rich and poor based on an unjust distribution of resources,” he said. Or “the pandemic can be the occasion for a ‘defensive retreat’ into greater individualism and elitism.”

The latter path, he said, “emphasises self-sufficiency, nationalism, protectionism, individualism and isolation; it excludes the poor, the vulnerable and those dwelling on the peripheries of life. That path would certainly be detrimental to the whole community, causing self-inflicted wounds on everyone. It must not prevail.”

When companies, including those being assisted by government handouts during the pandemic, focus more on profits than on job creation, they contribute to the “throwaway culture,” which treats people as less important than wealth, he said.

“At the origin of this throwaway culture is a gross lack of respect for human dignity, the promotion of ideologies with reductive understandings of the human person, a denial of the universality of fundamental human rights, and a craving for absolute power and control that is widespread in today’s society,” he said. “Let us name this for what it is: an attack against humanity itself.”

The pope called on countries to work together to fulfil the ideals upon which the United Nations was founded 75 years ago, particular in peacemaking, defending human rights and caring for the world’s poorest and most disadvantaged.

“It is in fact painful to see the number of fundamental human rights that in our day continue to be violated with impunity,” he said, speaking of a “frightening picture of a humanity abused, wounded, deprived of dignity, freedom and hope for the future.”

“Religious believers continue to endure every kind of persecution, including genocide, because of their beliefs,” he said. “We Christians, too, are victims of this: how many of our brothers and sisters throughout the world are suffering, forced at times to flee from their ancestral lands, cut off from their rich history and culture.”

But the pope also drew special attention to situation of refugees, migrants and the internally displaced fleeing conflict, persecution and extreme poverty.

In an apparent reference to the situation in the Mediterranean, he denounced how “thousands are intercepted at sea and forcibly returned to detention camps, where they meet with torture and abuse. Many of these become victims of human trafficking, sexual slavery or forced labour, exploited in degrading jobs and denied a just wage. This is intolerable, yet intentionally ignored by many!”

Nations have entered into regional and international agreements to assist migrants and refugees, but often are lacking the political support at home to make them a reality or the countries just “shirk their responsibilities and commitments,” he said.

“The pandemic has shown us that we cannot live without one another, or worse still, (be) pitted against one another,” Pope Francis insisted. “The United Nations was established to bring nations together, to be a bridge between peoples. Let us make good use of this institution in order to transform the challenge that lies before us into an opportunity to build together, once more, the future we all desire.”