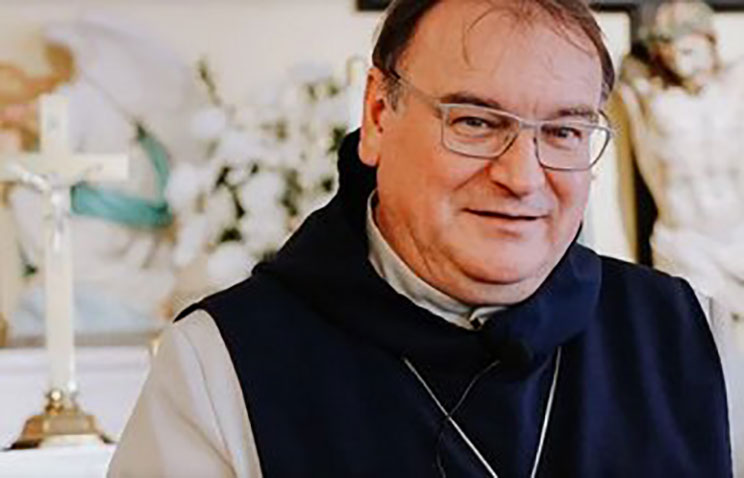 By Francois Gloutnay – Two Canadian dioceses have disavowed the messages and prophecies of a Canadian priest known for prophesying doom.

Father Rodrigue “has retired as an active priest in the diocese” and has renounced “his pastoral responsibility for the three parishes that I had entrusted to him,” said Bishop LeMay.

Bishop Bourgon also refuted the priest’s claim to be “an official exorcist of the church.”

Father Rodrigue founded the Apostolic Fraternity of St. Benoit Joseph Labre, an association that brings together priests and laypeople, based in Saint-Dominique-du-Rosaire, Quebec. His prophecies are published on an American website. Father Rodrigue also gave several conferences in the United States, where he was able to spread his ideas.

During these conferences, Father Rodrigue affirmed, among other things, that the whole world is controlled by a secret world government made up of Illuminati worshipping Satan. He talks of an upcoming nuclear war that will ravage the planet and evokes the existence of “refuges” where Christians will be led thanks to a small flame produced by guardian angels. He also maintains that Satan will use vaccines to make people sick.

“The devil will use your iPhone, your iPad, your tablet. … We will have to throw these things out to protect ourselves, throw everything off of your land. You won’t need these things anymore. You have to be faithful in this. Throw them out. Don’t worry about communication,” he said.

It was in March 2020, “while we were on a COVID-19 break,” that Bishop Lemay discovered that a site, which regularly publishes the “revelations” that God would have transmitted to seers in different countries, had put online eight conferences given a few months earlier in California by Father Rodrigue.

The website Countdown to the Kingdom hosting Father Rodrigue’s ideas describes him as “an official exorcist of the church” who “receives the full support of his bishop” and said all his visions were submitted to his local ordinary for approval. Bishop Lemay said he was shocked to read the statements and that he never approved the priest’s “prophecies.” He asked that the statement be removed from the website, which it was.

But the bishop received so many calls and letters from anxious and worried people that, four months later, he made a point of publicly expressing his disavowal of Father Rodrigue’s “messages and prophecies.”

Before March, “we received a few letters from people wondering about the activities of Father Michel Rodrigue in the United States,” said Father Raymond Martel, vicar general of the Diocese of Amos. “But we didn’t follow up on these letters because, at that time, we had no idea what he was talking about. All we knew was that he was going to preach retreats there. That’s what he was telling us.”

But when the conference videos were put on the internet, the diocese was flooded with emails and phone calls, which Father Martel answered in French, English and even Spanish. For the past five months, “every week, emails have been coming in from all over the world.”

“Phone calls too. Many from the United States, but also from Ireland, Mexico.” He said one woman from France phoned his office “in a state of panic.”

Most people “wanted to know the bishop’s position on what Father Michel is announcing,” said the vicar general. In other cases, if someone “had reservations about his prophecies, it was clear that this was not what people wanted to hear. They wanted us to say that we were in complete agreement with what Father Michel had said. Others were happy to learn that the bishop advised prudence.”

Bishop Bourgon recalled that from 1989 to 1996, Father Rodrigue worked in parishes of the Ontario diocese. He then left the diocese and moved to Montreal with the Sulpicians.

“We had no news of him,” he added. Father Rodrigue does not hold any pastoral office or function in either Canadian diocese.

Earlier this summer, Countdown to the Kingdom wrote: “Please note that, although we now know that Bishop Lemay ‘does not support’ Father Michel’s messages, it remains true that the messages are nevertheless not condemned. There has been no formal inquiry into Father Michel’s locutions/visions etc. by the diocese and so, at this point, we are preserving them here on Countdown to The Kingdom (with Father Michel’s express permission) because our position regarding them remains unchanged; we continue to find them important to be discerned …”

The Apostolic Fraternity of St. Benoit Joseph Labre did not react to the bishops’ comments.

“Father Michel Rodrigue is currently on a spiritual retreat,” said a spokesman, adding that any request for information should be sent to him by mail.

“We, too, can only contact him by mail now,” said Father Martel.