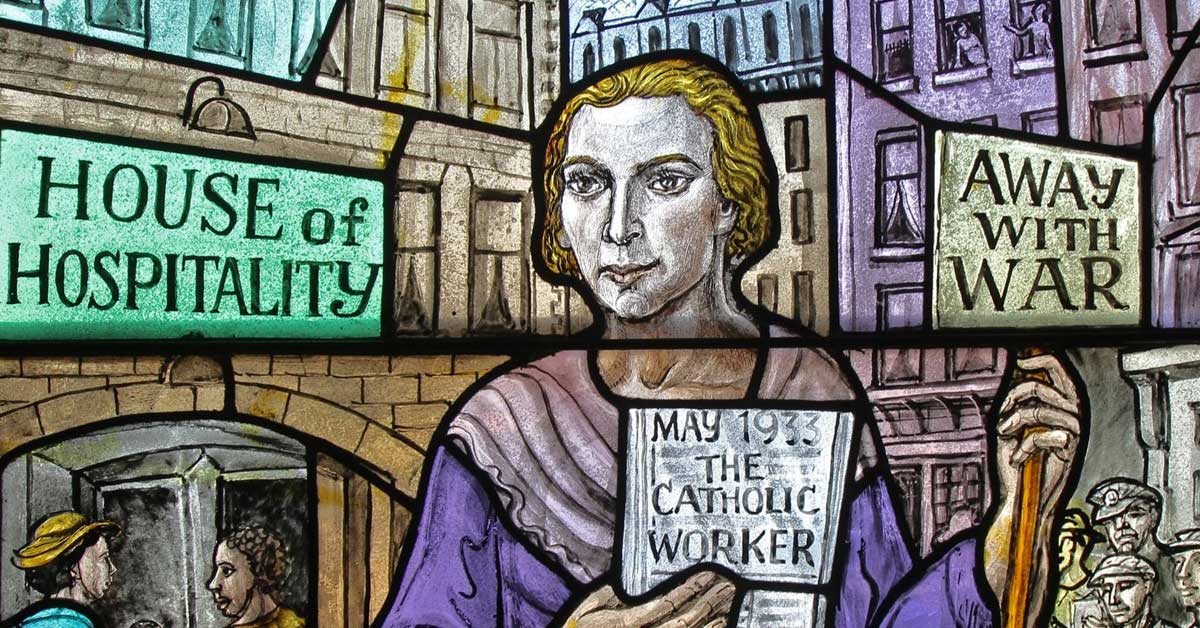 Dorothy Day, co-founder of the Catholic Worker Movement and its newspaper, The Catholic Worker, is depicted in a stained-glass window at Our Lady of Lourdes Church in the Staten Island borough of New York. “Day is a wonderful exemplar of someone who was both critical and at the same time incredibly supportive of the church,” said Ronald Arnett, chair of communication and rhetorical studies at Duquesne University in Pittsburgh. (CNS photo/Gregory Shemitz)

By Mark Pattison – Dorothy Day’s witness nearly 100 years ago sets an example for today’s society, according to a Duquesne University professor who is writing a book on the life of the co-founder of the Catholic Worker movement.

“Day is a wonderful exemplar of someone who was both critical and at the same time incredibly supportive of the church,” said Ronald C. Arnett, chair of communication and rhetorical studies at Duquesne, a Catholic university in Pittsburgh.

“If she were here and she was asked, ‘Who should I vote for?’ I’d love to hear her answer,” Arnett said.

Professor Arnett’s October 22 talk, “Practices That Matter: The Faith and Politics of Dorothy Day,” he focused more of his attention on shortcomings in American society, made worse by the coronavirus pandemic.

Arnett, speaking as part of the “Communication & Religion in the 2020 Election” conference hosted by the Institute for Communication and Religion at Seton Hall University in New Jersey, said: “One cannot ignore the power of knowing why you are doing something and having a practical impact.”

“Think of the exhaustion level you have with children, with relatives, with your jobs or with your country,” he said. “The fatigue level seems high. The practices are incredibly important, and the ‘why’ for those practices essential.”

“We can’t muscle our way through a pandemic,” he added. In troubled times, “someone you never expected to stand up does. They stand up, and they lead and they heal,” Arnett said, with their sole motivation being “If not me, who?”

In U.S. society, individualism reigns, Arnett said. “Individualism in my judgment is the banality of evil in this historical moment,” he added. “The individualism that Dorothy Day attempted to counter is assumed often within the West as the primary way to function.”

He pointed to people and fictional characters regarded as heroes: “They’re dissociated from society,” Arnett argued.

“What compelled Dorothy Day is that she felt lost and lonely. The faith and reflective practices in her community began to nurture how she and her community could frame a life together,” Arnett said. “The Catholic Worker movement was a community, a practical and faith-centred project.”

Day found her vocation in the Catholic Worker movement. “Most of us, including me, do not want to get involved with the sacrifice of a Dorothy Day,” Arnett acknowledged.

But in keeping with 20th-century German Lutheran theologian Dietrich Bonhoeffer’s delineation of “cheap grace” and “costly grace,” Arnett said, “Vocations are not cheap. They cost us something. … There’s a cost when communities are forgotten, but there’s a cost to us when we are the ones involved in the forgetting.”

“Dorothy Day is the prime example of responding with incredible grace … as she went through her own search of existential loneliness,” Arnett said, “her inspirational life that turned existential confusion into a faith-filled performative understanding of communal labour” with a “consistent commitment to and for social justice within the church.”

Day “did not take a poll each time she moved in the direction of hospitality houses, concern for issues of peace, intervention in places of poverty,” Arnett said. “But clearly there was disagreement with many of her decisions, and if she’d taken a poll, she’d have clearly followed a direction: Follow the herd. Today we wouldn’t be talking about her, we’d be talking about someone else.”