Pope and Religious Leaders Pray For Greater Care For One Another 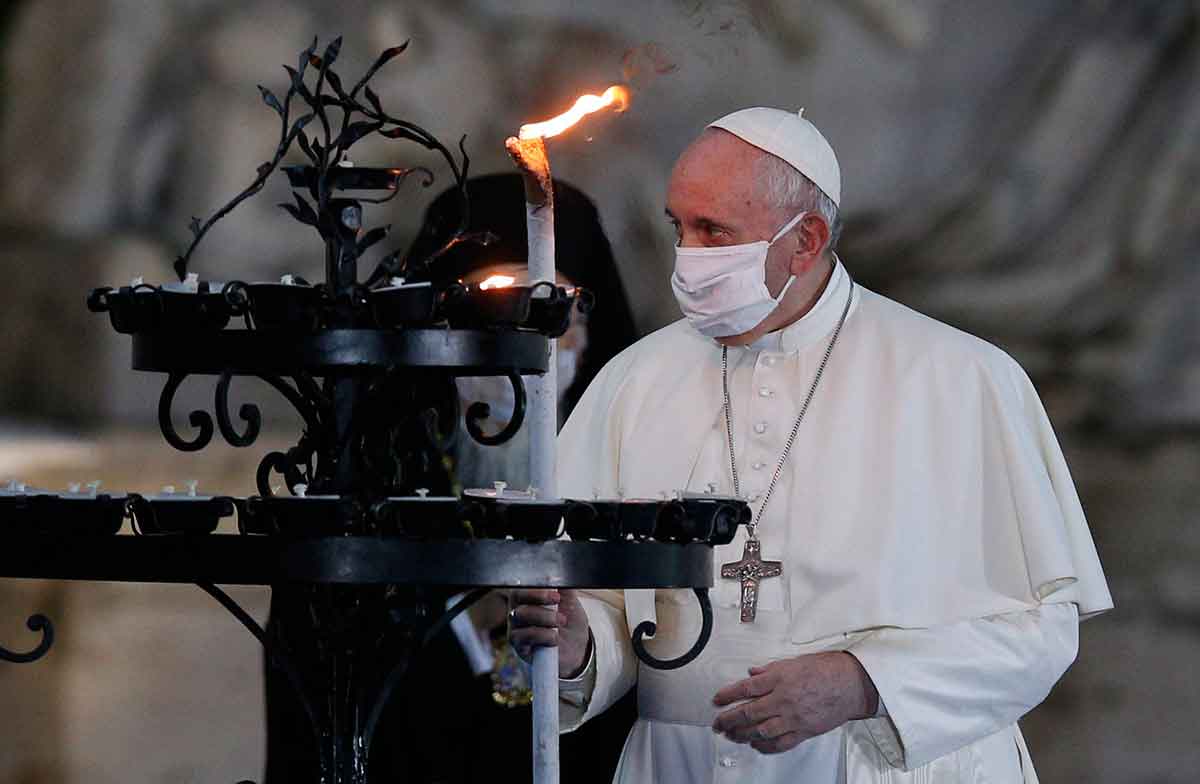 Pope Francis holds a candle after lighting a candelabra at the conclusion of an encounter to pray for peace in Piazza del Campidoglio in Rome October 20, 2020. (CNS photo/Paul Haring)

By Cindy Wooden – The only way to end war and ensure humanity’s survival is “through encounter and negotiation, setting aside our conflicts and pursuing reconciliation, moderating the language of politics and propaganda, and developing true paths of peace,” Pope Francis said.

The pope, Ecumenical Patriarch Bartholomew of Constantinople and an international array of other Christian, Muslim, Jewish, Sikh and Buddhist leaders gathered on Rome’s Capitoline Hill October 20 to affirm their community’s commitment to peace, dialogue, fraternity and assistance to the poor and needy.

Before coming together to make their peace pledge, the religious leaders gathered with members of their own faith families to pray, focusing on the theme, “No one is saved alone: Peace and fraternity.”

Pope Francis, Patriarch Bartholomew and other Christians prayed in the Basilica of Santa Maria in Ara Coeli; Jewish participants prayed in Rome’s main synagogue a few blocks away, while Muslims, Buddhists, Sikhs and members of other religions used rooms in the Rome City Hall and in the Franciscan convent attached to the basilica.

Gathered in the Piazza del Campidoglio, designed by Michelangelo, the religious leaders observed a moment of silence for the victims of the coronavirus pandemic and of all wars and civil conflicts.

In the face of uncertainty and, especially, the threat of violence, people naturally are tempted to think only of themselves and their loved ones, but that is not a Christian response, Pope Francis said at the prayer service in the basilica.

“Save yourself” – the words the crowd and the chief priests said to Jesus as he was about to die – “is a very human instinct, but wrong,” the pope said.

“The ‘gospel’ of save yourself is not the Gospel of salvation,” he said. “The true Gospel bids us to take up the cross of others.”

The meeting was organised by the Rome-based Community of Sant’Egidio. Since St John Paul II’s interreligious prayer for peace in Assisi in 1986, the community each year has invited religious, political and cultural leaders from around the world to gather to continue the dialogue and to pray for peace.

The community’s international meetings usually last several days and include panel discussions and workshops on various themes related to peacemaking, interreligious dialogue and service to the poor. Because of the Covid-19 pandemic, the 2020 meeting was just an evening event.

Lutheran Bishop Heinrich Bedford-Strohm, president of the Council of the Evangelical Church in Germany, gave a reflection at the Christian prayer service.

With everyone, including the pope and patriarch, wearing masks and sitting three feet apart, Bishop Bedford-Strom told the congregation, “Our souls are confused. All the physical signs of connectedness – hands reaching out to each other, speaking closely face to face unmasked, embracing each other, giving each other hugs – all these physical signs, which so far have been expressions of love, have now become the enemy of love, have become a danger to the other, have become a potential source of suffering.”

“How can we as churches be heralds and agents of God’s healing?” he asked. “How can we be signs of peace and brother- and sisterhood?”

The answer, the bishop said, is found in “the trinity of praying, doing justice and becoming one.”

Asking oneself if Christ is present in a refugee stuck in a camp or in a child who is starving “is the door opener to a fulfilled life. It is the path to peace and fraternity,” he said. “It is the source of healing.”

In his homily, Pope Francis said that as Jesus was dying on the cross, “Calvary was the site of a great ‘duel’ between God who came to save us and man who wants to save only himself; between faith in God and worship of self; between man who accuses and God who excuses.”

“Jesus’ arms, outstretched on the cross, mark the turning point, for God points a finger at no one, but instead embraces all,” the pope said. “Love alone extinguishes hatred, love alone can ultimately triumph over injustice. Love alone makes room for others. Love alone is the path toward full communion among us.”

At the interreligious gathering after the prayer services, Patriarch Bartholomew, who has long led Christian theological reflections on ecology, insisted that care for the earth is an obligatory response to belief in God the creator of all.

The world is experiencing a difficult period, he said, “but at the same time, a moment favourable for questioning ourselves, meditating, praying and acting to build a better society capable of facing the great challenges of the moment, which don’t impact only certain peoples and nations, but life itself in this marvellous home of ours – the world, a gift of the merciful God.”

Recognising the “divine work” present in the environment and in each person, he said, would help people understand that fraternity and peace are not simply pious words, but lead to “true freedom” and an understanding “in this dark hour that ‘no one is saved alone.'”

Mohamed Abdelsalam, secretary-general of the Higher Committee of Human Fraternity, read a message from Sheikh Ahmad el-Tayeb, grand imam of al-Azhar Mosque, who used the occasion to condemn the beheading October 16 of a teacher in a Paris suburb accused of showing cartoons of the Prophet Muhammad to his class during a lesson on civil liberties.

“I declare before Almighty God that I disassociate myself, the rulings of the religion of Islam, and the teachings of the prophet of mercy, Prophet Muhammad, peace be upon him, from such (a) heinous criminal act and from whoever would embrace such deviant, false thought.”

The heart of el-Tayeb’s message was a reaffirmation of the document on interreligious dialogue and human fraternity he and Pope Francis signed in 2019 and a condemnation of prejudice, racism and forms of globalisation that attempt to get people to believe that their cultures or religious traditions are backward or even the cause of violence.

“The time has come for us to adopt a new form of globalisation based on human fraternity that treats all human beings as equal in rights and duties and strengthens social coexistence,” he said. It also must respect “religious and cultural specificities and identities,” he said, and work for a reduction of military spending, instead channelling those funds to education, health care and scientific research.