Pope Francis’ Christmas Liturgies to Take Place Without the Public 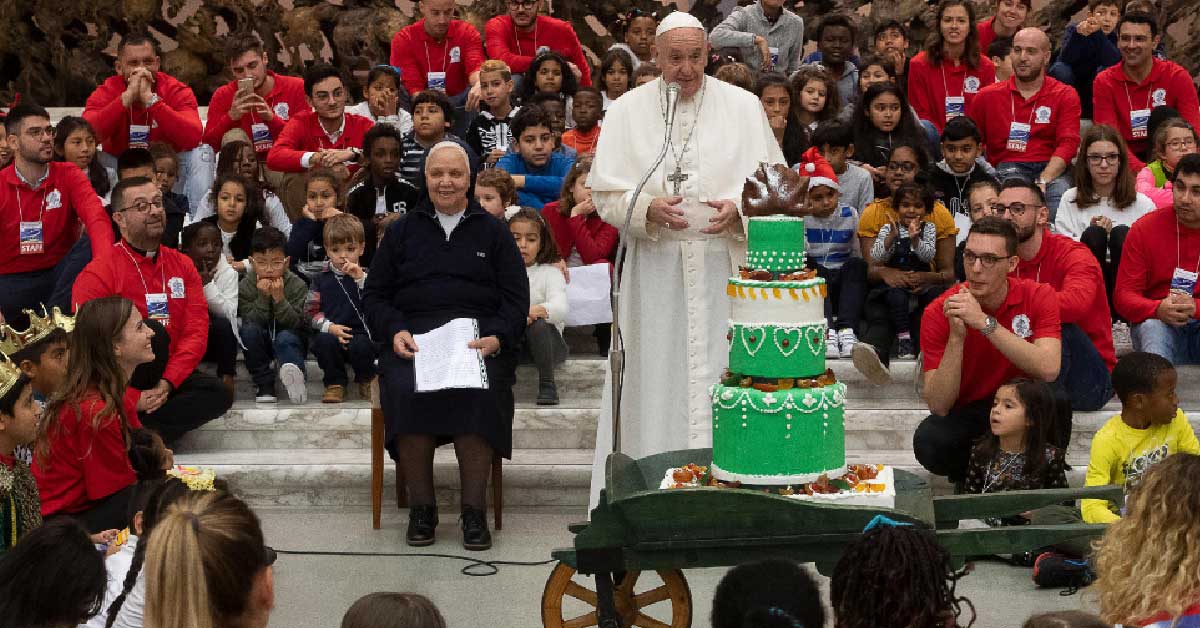 Standing behind a cake for his birthday, which he celebrated a few days earlier, Pope Francis speaks with children served by the Vatican’s St. Martha pediatric clinic. The clinic’s staff and volunteers also attended the special pre-Christmas meeting Dec. 22, 2019, in the Vatican audience hall. (CNS photo/Vatican Media)

Pope Francis’ Christmas liturgies at the Vatican will be offered without public participation this year, as countries continue to react to the coronavirus pandemic.

According to a letter seen by CNA which was sent by the Secretariat of State to embassies accredited to the Holy See, Pope Francis will celebrate the Vatican liturgies of the Christmas season “in a private form without the presence of members of the diplomatic Corps.”

The letter, which was sent by the section for general affairs October 22, said the liturgies will be streamed online. Diplomats accredited to the Holy See usually attend papal liturgies as special guests.

Due to pandemic measures, including a two-month nation-wide lockdown of Italy, Pope Francis also offered the 2020 Easter liturgies without the presence of the public.

Italy has seen a dramatic increase in positive coronavirus cases, as well as increased hospitalisations and deaths, in recent weeks, leading the government to issue new containment measures, including the full closure of gyms and theatres, and a 6pm closure for bars and restaurants except for takeout. Parties and receptions are also suspended. Since earlier this month, it has been mandated to wear face masks at all times in public, including outside.

During Advent and Easter, the pope’s schedule of public liturgies and Masses is usually particularly full, with thousands participating in Masses at St Peter’s Basilica.

In past years the pope has offered a December 12 Mass for the feast of Our Lady of Guadalupe and a December 8 ceremony and prayer at Rome’s Piazza di Spagna for feast of the Immaculate Conception.

According to the 2020 schedule of public papal events published on the Vatican website, instead of a Mass December 8, the pope will lead the Angelus in St Peter’s Square to mark the day.

During the Christmas season, the pope usually says Midnight Mass for the Nativity of the Lord in St Peter’s Basilica December 24, and on Christmas Day he gives the “Urbi et Orbi” blessing from the central loggia of the basilica.

In past years he has also prayed First Vespers on December 31 followed by a Mass on January 1 for the Solemnity of Mary Mother of God, both in St. Peter’s Basilica.

These events are not listed on Pope Francis’ public schedule for 2020, except for the Christmas Day “Urbi et Orbi” blessing. The pope is still slated to give all of his typical Angelus addresses and to hold the Wednesday general audience every week, except that of Christmas.

The schedule of public events does not extend past December 2020, so it is unclear whether Pope Francis will publically celebrate any of the liturgies of January 2021, including Mass for Epiphany January 6.

It is also unknown if Pope Francis will next year baptise the children of Vatican employees and say a private Mass for them and their families for the feast of the Baptism of the Lord, per his tradition.