Pope: The Gospel Is Not Reserved For A Few 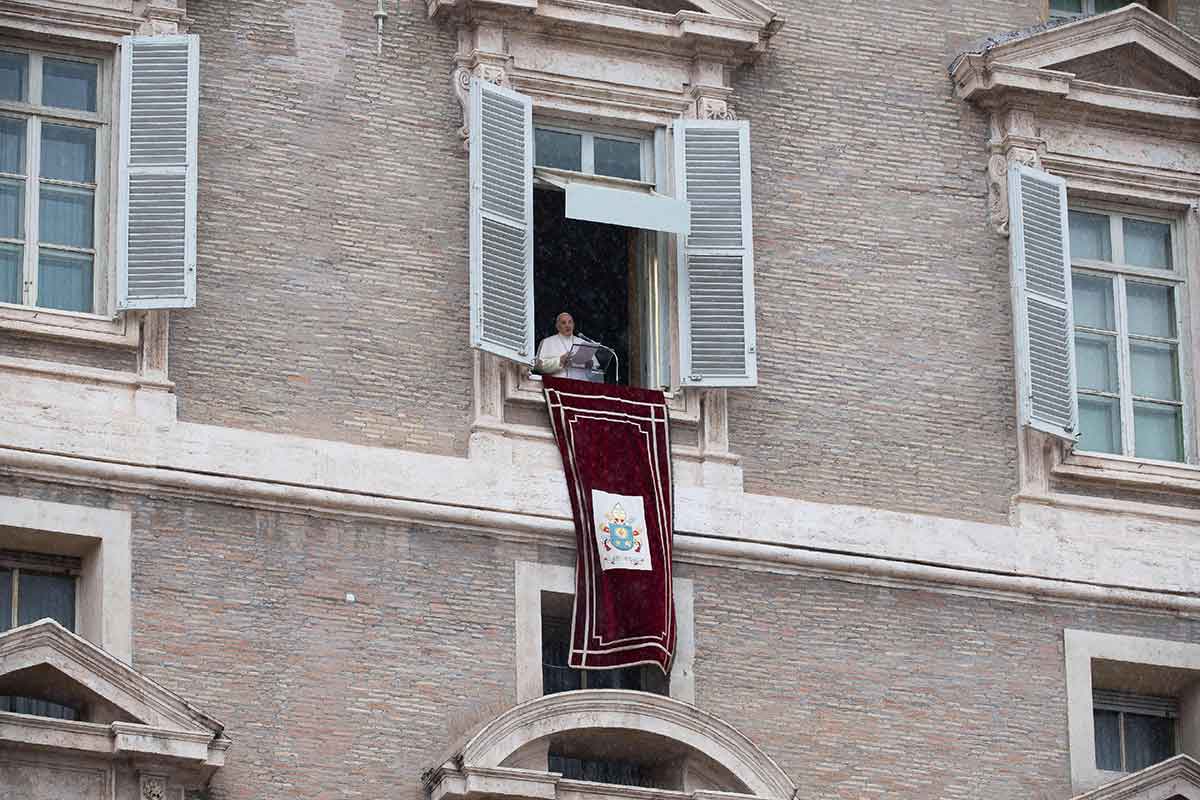 Pope Francis leads the Angelus from the window of his studio overlooking St Peter’s Square at the Vatican October 11, 2020. (CNS photo/Vatican Media)

By Cindy Wooden – God loves and has prepared a banquet for everyone –  and every Christian is called to go out to the highways and byways sharing God’s invitation to the feast, Pope Francis said.

Before reciting the Angelus prayer October 11, the pope reflected on Jesus’ parable from the Gospel of Matthew about the king who prepared a wedding feast for his son; when the originally invited guests did not arrive, he sent his messengers out to invite anyone and everyone.

“Even those on the margins, even those who are rejected and scorned by society, are considered by God to be worthy of his love,” the pope told the crowd gathered in St Peter’s Square to pray with him.

The church as a whole and each of its members, he said, are called to go out to “the geographic and existential peripheries of humanity, those places at the margins, those situations where those who have set up camp are found and where the hopeless remnants of humanity live.”

“It is a matter of not settling for comfort and the customary ways of evangelisation and witnessing to charity,” the pope said, but rather “opening the doors of our hearts and our communities to everyone, because the Gospel is not reserved to a select few.”

After the formal prayer, Pope Francis expressed his closeness to people “impacted by the fires that are devastating so many regions of the planet, as well as to the volunteers and firefighters who risk their lives to extinguish the blazes. I am thinking of the West Coast of the United States, particularly California, and I am also thinking of the central regions of South America, from the Pantanal zone of Paraguay to the banks of the Parana River in Argentina.”

“Many fires are caused by persistent drought, but there are also those caused by man,” he said. “May the Lord sustain those who are suffering the consequences of these catastrophes and make us careful to preserve creation.”

Pope Francis also praised Armenia and Azerbaijan for agreeing to a cease-fire “for humanitarian reasons, in view of reaching a substantial peace accord,” after renewed fighting over the Nagorno-Karabakh region left hundreds of people dead in late September and early October.

The pope also used his post-Angelus remarks to draw attention to his prayer request for October, a request distributed globally by the Pope’s Worldwide Prayer Network, formerly known as the Apostleship of Prayer.

The intention, he said, “goes like this: ‘We pray that by the virtue of baptism, the laity, especially women, may participate more in areas of responsibility in the church.'”

“Today there is a need to broaden the spaces for a more incisive female presence in the church,” he said, “because in general women are set aside. We must promote the integration of women into the places where important decisions are made.”

He added, however, that women leaders in the church must maintain their vocation as laity and not fall into “clericalism.”

Finally, the pope encouraged young people around the world to join a rosary campaign being sponsored by the Aid to the Church in Need Foundation.

Pope Francis called the foundation’s “One Million Children Praying the Rosary” October 18 a “beautiful event” with children praying for peace and “especially for critical situations caused by the pandemic.”