Priest Walks 200km for Peace in his Country 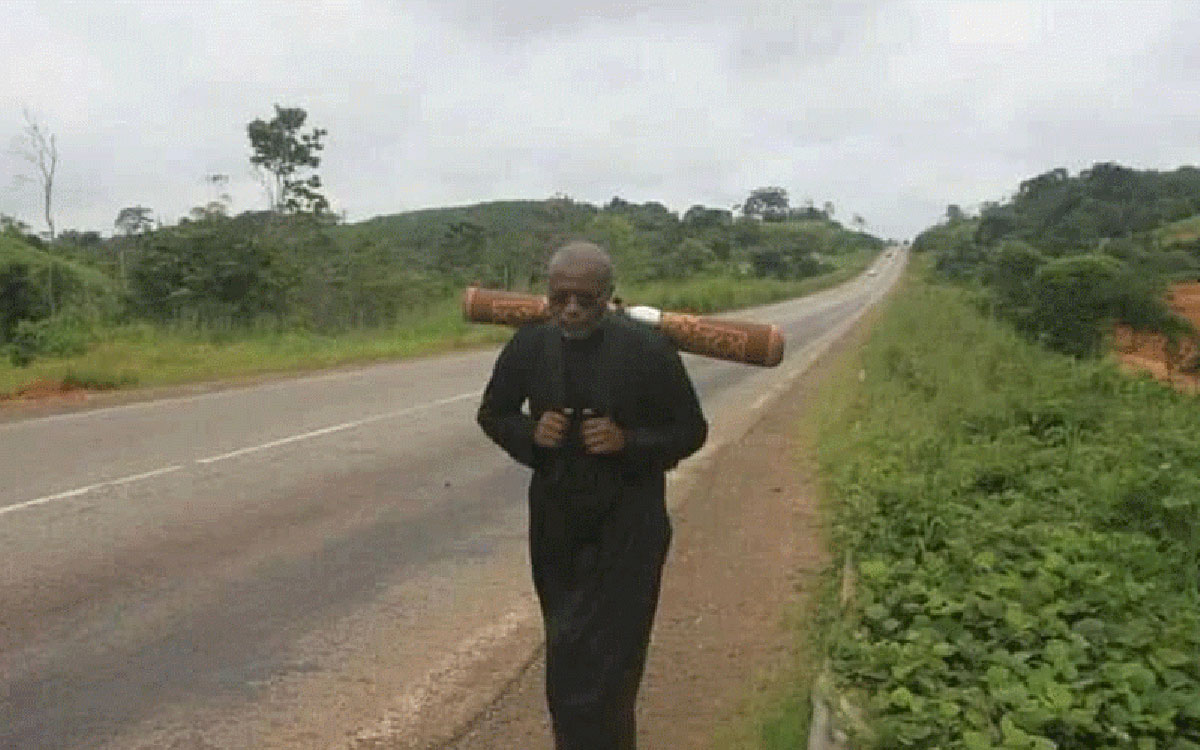 Fr. Ludovic Lado during the pilgrimage to pray for peace in the Anglophone regions of Cameroon interrupted by the police. Credit: Fr Ludovic Lado/Facebook Page

By Agnes Aineah – A Jesuit priest who was arrested shortly after he embarked on a 200-kilometre pilgrimage to pray for peace in Cameroon has condemned the ill-treatment he received at the hands of police.

The police brought the 200-kilometre pilgrimage that Fr Ludovic Lado had undertaken to a halt accusing him of carrying out “an illegal activity on a public road” after he had just done one day. The Jesuit Cleric has however promised to resume his spiritual journey later in the year regardless of whether he will be alive or dead.

In a message that was shared with ACI Africa, Fr Ludovic confirmed his arrest by police in Edéa, a city that lies between Cameroon’s economic capital, Douala, and the country’s political city, Yaoundé where the Cleric was headed.

“The Edéa police, on high instructions, violated my civil and political rights last October 13 by escorting me manu militari to Douala while I was on the second day of a pilgrimage that I had undertaken to pray and do penance for peace, dialogue and reconciliation in Cameroon, particularly in the NWSW (North-West and South-West) regions,” Fr Ludovic said.

In the communique that Fr Ludovic addressed to his “compatriots, friends of fraternity and of peace”, the Jesuit Cleric explains that he was interrupting his pilgrimage to Yaoundé and “giving to the belligerents and to my Church until the end of November to get involved in the search for a negotiated solution to the Anglophone crisis, which hurts human dignity.”

“If nothing is done by then, I will again pick up my pilgrim staff in December, this time from Douala to Kumba,” Fr Ludovic who turned 50 in June said, and added, “I will spend Christmas in Kumba, alive or dead.”

In a message shared with ACI Africa on October 12, the Cameroonian Cleric indicated that in walking from Douala to Yaoundé, he aimed to pray for a return of peace in the regions in Cameroon that have been warring since 2016.

“I am walking to pray and plead on the one hand for dialogue, justice, peace and reconciliation in the North-West and South-West regions of Cameroon and on the other hand to do penance for the reparation of crimes against human dignity committed in these regions,” Fr Ludovic said.

He added, “I walk so that human blood stops flowing in our country. I walk in solidarity with the internally displaced and the refugees of this useless war. I walk to exorcise in me and in us the demon of indifference.”

A Catholic media outlet, on Saturday, October 17 reported that Fr Ludovic had, however, been detained by police on his way, who accused him of “an illegal activity on a public road.”

“There were about eight police officers who took us to their station,” Fr Ludovic recalled what befell him alongside a photographer accompanying him, and added that the police wanted to know the purpose of his walk, and whether it had any political undertones.

They asked him if he was an apologist for the opposition leader, Maurice Kamto who was put under house arrest after leading demonstrations against the administration of President Paul Biya, who has ruled Cameroon since 1982.

Fr Ludovic reportedly told the police officers that he was on a pilgrimage for peace in Cameron and that he was apolitical.

The native of Bafou in the Western region of Cameroon also noted that a pilgrimage like the one he was carrying out is a normal religious practice and therefore not subject to any authorisations.

The Jesuit Cleric recalled the police officers telling him that “the Church is not above the law,” and that he was carrying out “an illegal activity on a public road.”

The Priest and the photographer accompanying him were then reportedly loaded into a police van and taken towards Yaoundé, where he went through another interrogation before he was returned to Douala, bringing his pilgrimage to a halt.

In the message shared with ACI Africa on Friday, October 16, Fr Ludovic called on his fellow Priests to join him in the pilgrimage, slated for December.

“I send a vibrant invitation to my fellow Priests to join me in black cassocks for this stage. I beg their respective hierarchies not to oppose it,” he said.

The Cleric said that the frustrations experienced at the hands of the law enforcement authorities would not cow him into inaction and fear.

“Fear is a bad guide,” he said, and added, “A disciple of Christ should not be guided by fear but by compassion.”

His motto is derived from the Gospel of Mark and the first letter of John, he said and cited the two scriptural references saying respectively, “Why be afraid, do you not have faith?” and “There is no fear in love, perfect love casts out fear.”

The Jesuit Cleric also expressed his appreciation for those who backed him with prayers on his pilgrimage initiative.

“May God bless you abundantly and make each of us a friend and maker of justice, peace, reconciliation and fraternity in Cameroon,” Fr Ludovic said.

He added, “In the meantime, I am returning to N’djamena to take care of my students, with the earnest hope that I will not need to come back in December because peace negotiations will have started.” – ACIAfrica